This Moment at the Peticolas Brewing Company... 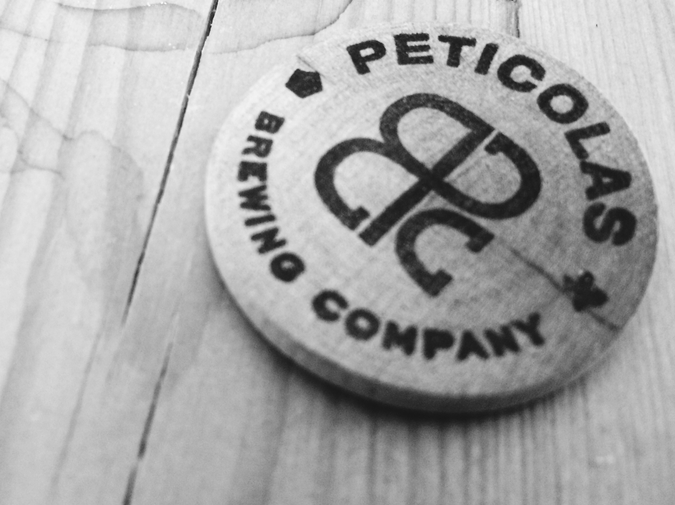 It looked like it was going to rain last Saturday afternoon when Chris picked me up for the Peticolas Brewery tour. The sky was getting dark and it was starting to get windy. Chris had offered to drive even though this tour was my idea. I've only known Chris for a few years but it seems like I've known him longer. He's married to my brother-in-law's wife's sister. He's my brother-in-law's wife's brother-in-law. Basically family. He and his wife moved to Dallas a few years ago after his wife passed the Bar exam and he'd gotten a job at Apple overseeing sales in the North East. Chris explains his job to me a couple times a year but I still have no idea what he does. He says the same thing about me.

The tour costs $10 cash at the door and they hand me a blossom-shaped Peticolas glass and three wooden coins stamped with the Peticolas logo. One coin is worth one beer. This is the whole reason I’m here. The cup and the beers. I am only a little bit interested in seeing how a brewery works. It might be entertaining to hear about while I am getting shit-faced drunk. We walk inside and the place is even more crowded than it looked when we drove up. We have to turn sideways to move through the room. There are foosball tables against the walls and upstairs I can hear people playing Ping-Pong. The floors are concrete and the ceilings are unfinished. It smells like a place where things get made, which is to say it smells like anything at all. In the companies where I've worked, companies that don't produce anything tangible at the end of the day, the offices have all been entirely devoid of smell. The sterile non-smell of corporate America. Inside Peticolas it smells like hops and barley and dust. I can see the light beams in the air.

Chris and I walk deeper into the brewery and try to get our bearings. The rooms are cavernous and I imagine they must feel incredibly empty during the week. The Peticolas staff is small and mostly family. On Saturdays they bring in volunteers to help run the tours. We find the bar in one of the back rooms and get in line. The bar is a slab of wood laid over three oil drums, and behind the bar, a row of makeshift taps is anchored into the wall. The names of the beers have been printed out on individual pieces of printer paper and taped up with scotch tape: Wintervention, Great Scot!, Sit Down or I'll Sit You Down, Black Curtains, Royal Scandal, and Velvet Hammer.

I order the Sit Down or I'll Sit You Down and ask where they got the name. The guy behind the bar is wearing a Peticolas shirt that looks like it's 10 years old but couldn't be more than two. He says Michael Peticolas's brother used to be a cop on the show Cops! and in one episode he told a kid to, "Sit down or I'll Sit you down!" It's been a family legend ever since. He hands me back my glass, now filled with a golden bubbling liquid, and Chris and I walk further back through the brewery until we're outside again, on the loading dock, and we sit down with our feet dangling above the ground.

Before Michael Peticolas opened his brewery he'd been a lawyer. His mom introduced him to brewing the 90s but it wasn't until 2012 that anything really came of it. Now he runs one of the most popular breweries in Dallas, second only to Deep Ellum Brewery. His first beer, the Velvet Hammer, won gold at the Great American Beer Festival, which is a big deal. I want to find Michael Peticolas and ask him if he's happier now that he's a brewer but he's not here today.

The Sit Down or I'll Sit You Down is going straight to my head. I haven't eaten all day and the alcohol burns in my stomach. I ask Chris what he thinks of the Velvet Hammer and he says it's interesting, which sounds like a cop-out answer except that's exactly what the Velvet Hammer tastes like. There's a lot going on. It's sweet, hoppy, heavy and refreshing all at the same time. The first time my wife tried it she said, That might be the only beer I've ever liked. Then she took another sip and said never mind.

It's pouring now. The roof extends a few feet out from the building and creates a sort of waterfall in front of us, and past the waterfall we can see the dozen other offices in this industrial park. My office used to be just around the corner, a collaborative space where artists and photographers and filmmakers all share a few desks and a coffee pot. My company, a marketing agency, worked in the back. We've grown since then though and now we're downtown. I never meant to get into marketing and I'm not sure I'm happy doing it anymore.

Chris asks when the tour is going to start and I say it was supposed to start fifteen minutes ago but I'm wondering now if there's really a tour at all or if we're just supposed to walk around. We finish our beers and when I stand up my vision lags behind reality. I like this feeling. Not drunk but sloshy, like there's a warm layer of liquid between me and everything else, even myself.

We walk through another doorway (this building is bigger than I thought) and find a room full of brewing machines. There must be a dozen of them lined up against the walls, ten feet tall and polished like they're brand new. I don't need a tour guide to tell me that this is the only room in Peticolas that matters. This is where the beer gets made. It's smaller than I thought it would be, maybe the size of a basketball court, maybe a little bit smaller. They're serving beer back here too and I ask for a Black Curtain, which has 11% alcohol and comes out of the tap like mud. The foam on top is dark coffee brown. It's 30 minutes past the time when the tour was supposed to start so I guess this must be the tour then. Chris and I lean against the wall near the bathroom and sip our beers. I know right away that the Black Curtain is going to fuck me up but I keep drinking it anyway. I'm watching a group of guys standing near one of the brewing machines. They have their hats on backwards and they're pouring their beers down one of the drains in the floor. It's just beer but it's hard to watch. They get back in line with their empty glasses and ask for more. The girl pouring the beer is young and pretty so maybe they're trying to pick her up. I wonder if they even like beer or if they're just here because touring a craft brewery has become a cool thing to do in Dallas on a Saturday. Either way I hate them.

I didn't always feel this way about beer, this reverential. It's a recent thing, within the past three years or so, and it's hard to say what changed exactly but beer has become, along with coffee and tacos, one of the most important substances in my life. Beer matters to me. At this point, I'm not sure I could go very long without it.

I'm drunk now — on my third beer, the Great Scot!, 6.8% alcohol — and I ask Chris if he's happy with his life. We've known each other awhile now but we don't normally ask each other questions like this. Our friendship is based on sarcasm and inside jokes and me asking Chris which iPhone apps I should download. Chris is the type of friend I would go on a road trip with but wouldn't cry in front of. I can't imagine a scenario that would lead to us hugging. But I ask him if he's happy and he thinks about it seriously for a minute before saying he doesn't think he's very happy. I say I don't think I'm very happy either.

Maybe we need to become brewers, he says.

It's obvious, I say. Brewers.

We need to make something with our hands, he says. We need to have something to show for ourselves at the end of the day.

What do we have to show for ourselves right now? I say.

We have nothing to show for ourselves, he says.

It's pathetic when you really think about it, I say.

If we don't become brewers we will never find any meaning in our lives, I say.

It's our only option, He says.

The rain is letting up by the time we leave the tour. The roads out here are all gravel and now they're thick white mud. Neither of us have eaten anything and Chris asks if I'm hungry and I say I'm drunk and that eating something would probably be a good idea. He says it's a good thing he only had two of his three beers. We drive back to Plano, to the pub next to my apartment, the Filmore, and we meet my wife for lunch. I order the fish and chips and a Guinness. My wife says, How was the tour and we say the tour was good. She says, A little too good maybe? And I say, No, the tour was exactly the right amount of good, no more and no less. Chris takes his last wooden Peticolas coin out of his pocket and turns it over in his hand a couple times. He spins it on the table and we all sit there watching it spin.

Geoffrey Geoffrey is an advertising copywriter. He and his wife live in Dallas, Texas.