This Is What That Means 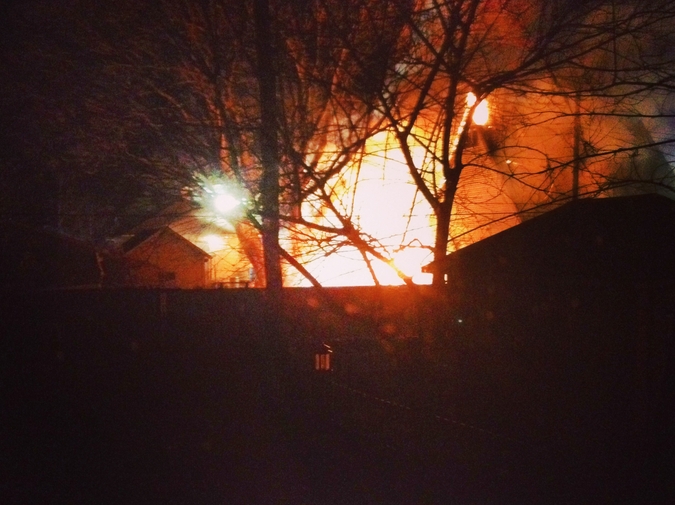 I snapped back into it at the bar. I’d been there the whole time, of course, but I hadn’t really acknowledged it, and I took in the room and the situation like crawling out of a ditch. Billy was chatting with Brandi and some girl she was with who I didn’t recognize, even though she’d probably driven here with us.

We were at the only bar in this borough of town. There was a laundromat I slept in once right next to it. The bar was small, literally not much more than ten seats at a counter. It reminded me of like an office in a gas station but without even the sleazy posters.

Hanging over us were plastic Easter eggs and felt shamrocks speared by paperclips hanging from fourth-of-July tinsel wrapped in Christmas lights that ended behind the bar near the pile of carnival toys, a foam jack-o-lantern, and stacked packs of cigarettes.  It was all so real it made my eyes water.

Billy said, “Look at him go, that magnificent son of a bitch.”

I looked out window where I saw the girls looking, and there I saw Travis in his truck, which had slid sideways in the snow and was now creeping slowly down the hill on the horizontal, like a pad of butter on a warm pan. Slow enough, I guess, that Travis declined to give a fuck about it.

“Balls of steel he must have,” Billy said in awe.

“Why?” I said. “It’s not like he could do anything about it now if he wanted to.”

“You didn’t see it—he swung that truck out of here like a madman. He wins. He wins the winter Olympics of drunk driving. I declare it.”

“I’m still in favor of the UPS guy from the other day,” I said.

We both watched a second as Travis’ truck crept slowly down the hill, and we both wondered how he was going to take the corner where the road curved.

“You want another beer?” I asked, and Billy accepted.

Behind the bar the owner himself, Brian, was pinning up another index card, singing Queen. The card read: Travis Lynn: Barred 99 years. Call 911.

I asked, “What did Travis do?”

“He’s an idiot,” Brian said. With Travis’ there were other cards of shame on the wall. My eyes scanned them.

There were other, older cards that I couldn’t make out. Brian liked to ban people from his bar. He also liked to write passive-aggressive notes about people leaving the lights on in the bathroom and throwing trash on the floor, and he’d pin them up all over the place next to the decorations.

He held up a packet. I said, “No, not that kind. Like for a sinus headache. Decongesting.”

He lay the packet down on the bar and told me, “You can take it or leave it ‘cause I don’t know what the fuck you’re talking about.”

I picked it up and tried to read the ingredients on the back and couldn’t quite focus on it. Everything had been disjointed—disarticulation, I thought—but was now too definite. I was looking at the packet of Advil on the bar, and I felt naked. It was too much—how clearly I was sitting there, with Billy, and the girls and Brian, and it was past midnight and snowing outside.

People were dying. People were falling in love. This was happening. It was violating, to be so pinned down in time and space, like something about to be dissected.

I started unraveling the string of shamrocks on paper clips from the tinsel, just to have something to lose myself in.

I asked, “Billy, wasn’t there something we were supposed to do tonight?”

Billy put the car in gear and pulled us out of the driveway, spinning gravel. We were running errands. It was a lot of stopping at different people’s houses, dropping things off and picking them up. That bullshit.

When there’s snow on the ground and clouds overhead in the winter, it doesn’t get dark so much as red. The snow reflects the light back at the sky, and the whole thing turns this sort of chemo-radioactive burnt orange, like there are bonfires the size of houses happening just out of sight, all around. When it got dark, the sky was like that.

I’d stopped sensing any break between the days. I would go to sleep and wake up feeling like I hadn’t, like no time had passed and I was living in one huge stagnant lake of consciousness. I hadn’t felt my toes in months, it was so cold. I fell asleep and woke up thinking of the same things. I couldn’t escape myself at all. I remembered everything. I was a prophet of doom.

“I don’t get it,” said Billy. “They think someone cursed someone to fall out of a tree?”

“Sort of. But it’s more like not everyone that falls out of a tree dies. And not everyone who gets sick dies. So, like, why this person? Why now? And when you think about it, it’s an unanswerable question. Like no amount of science or whatever is going to be able to explain that to these people because there’s no answer to that question.”

“Yeah. They want a reason, and the reason is witchcraft.”

“See, because on the one hand it’s like a super primitive way to get at it, but it’s still a valid question. Still grazes the eternal big mystery of it all, you know?”

I took a couple of the pills Billy offered.

Brian was crouched behind the bar, messing with power strips and outlets, and asked, “Which one of you unplugged my Christmas trees? They tie this whole shithole together. They’re the tour de force.”

“Careful, Billy. Wouldn’t want to get barred,” I said lowly and gently removed one shamrock from its paperclip. Billy laughed a little. I felt like a corpse. Billy was holding a lighter to a paperclip and writing on the bar with it.

Billy was this guy I met at the mall when I was fourteen and when he was all decked out in leather and shiny metal spikes and had a mohawk. His car still bore a massive insignia from some punk band. It read: All Cops Are Bastards.

It got him pulled over a lot.

The day after I met him, I called him to buy some acid, and when I asked him where he was, he said, “I’m just sitting here at the CVS with my arm in the blood pressure cuff.”

I  asked the obvious—you know, why would you do that?

And he said, “I like to hang out and wait until I see a girl come to pick up her Valtrex script, and then I move in, and I’m all like, ‘Hey, baby, you got it, I got it, let’s hit the big time.”

I asked him, “Jesus, do you really have herpes?”

And he said he was just fucking with me. He was at his house; I could stop over anytime.

He had big gaping fucking holes in both arms from smack. They were black.

It was just this: Billy’s car and the wash of other people’s houses as we walked in and then left again; everyone’s kitchens dirty and yellow; barbed wire tattoos; full ashtrays and cups with cigarettes unraveling at their bottoms.

I said, “You know, as a way to die go, choking on gasoline has got to be a pretty bad way out.”

“Bone marrow rejection, I hear, is actually the worst. Like, in terms of excruciating pain,” I said. “I read it somewhere.”

I waited, then asked, “How do you think you’d want to die?”

“I want to blow something up,” Billy said.

“So you want to die in an explosion?” I asked.

“No, I’d die after the explosion. Suicide by cops.”

We drove through a tunnel that looked like it might be on fire but was just the salt from all the cars kicked up into a brittle white fog. I could taste it when I licked my lips.

I asked Billy, “Wasn’t there something we needed to do tonight?”

“We…needed to get our asses to Brandi’s. That seems pretty definite.”

“No, wasn’t there something we needed to do, before all this?”

“How the hell am I supposed to know?”

“Do we have any more cough syrup? Do you think?”

“Don’t even go there, Jimmy. You with this cough syrup thing. It’s a fucking mess.”

“We’re not buying cough syrup,” he said, and I took it like a blow, and I had to rearrange all my expectations for the night.

Everything was apocalyptic and darkened as we passed it. There was something we were supposed to do, but we couldn’t be trusted anyway. There was a dead girl and a snake in a trailer and throwing up in the Sheetz parking lot. There was a party and people stacked on top of people and a boy standing on the couch shouting, “This is 40 hits of acid. This is what that gets you. This is what that means.” There were dozens of these parties, and this is all we’ll ever get.

There was me, treading water among these things. There was the world filled with dread and none of it meaning anything, anyway.

There was spinning on the ice and the G-force holding me against the window, and then abrupt dead air. Spin out.

I thought I might throw up. Billy had a bloody nose, but he was smiling at me.

We sat for a minute.  I could still feel the glass-shattering brisance of the impact rocking through my head. We were pointed the wrong way. I found myself looking up at a copse of beech trees that reached forward in the dark like bleached splinters of bone. The whole thing felt good in an aching kind of way.

The girl with Brandi seemed to believe we were matched up, as it were, since Billy was talking to her friend. She lit a cigarette and said, “So what is it you do, Jim?”

“Nobody can do ‘nothing.’ Seriously, what do you do all day?”

“Well, what do you want to do?” she asked. She gestured her cigarette held loosely in her hand, and it made me imagine that her questions were hanging, dispersing around the room at eye level like all this smoke. It made me tired.

I knew she meant generally, like what I want to do with my life. I don’t have any ideas about the future, but I want to sleep again, and I want get outside my own head, and I want to feel alive without a sense of panic. I want everything to be whole and I want us all to be forgiven.

Fuck if I know how to say that to people.

So I said, “I don’t know.” And I picked little bits of dirt out of my shoes’ tread with a pencil, and I felt a pale numbness come unbearably to rest in the pit of my stomach.

When I was younger, I liked to drive out past the old farms, a hundred rusted hubcaps pinned up on the fences or the sides of the houses on either side of me, and I’d smoke pot laced with different things, lean over the wheel, and look at the swollen sky, gone all pink and soft. The trees smoldered a rich Irish auburn when the sun hit them. I’d sit in my car with a hum of street chemicals like something exploding right in my chest. It was the only thing I could think to call sacred.

Maggie Donohue is a Pittsburgh writer now living in Houston, TX. Her chapbook, Ruiner, was published by Focal Tension Press.