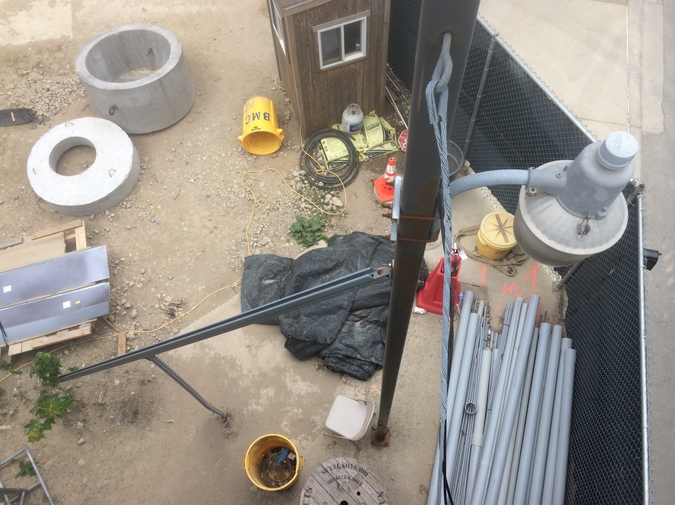 That’s what your parents say when they come in with their Santa suits. But it’s not Saturday. It’s Tuesday. It’s time to go to school. Your mom says, Nope, you’re not going, or maybe it’s your dad. You can’t tell. They’re both wearing the same suit. They look like the robbers from that movie Home Alone, which makes you Macaulay Culkin, and you’re not sure that you like that. You know you don’t. They have these little masks on, like Santa making an unlawful entry. Like they’re about to go down the chimney but forgot to get their permit. You can picture them, your mom and dad, doing their chimney sweep, Mom looking around like maybe we should have checked with the authorities, or at least registered with the Santa association.

You think that but then you look at her. Or him. They do not look like the type to ask permission. They smell like apple tart and Billy, Billy Bob Thornton, the guy who was married to Angelina Jolie and did that movie Bad Santa. They smell like whiskey, in other words, like they were drinking in the basement before they came in here with you.

They hand you a present. It’s wrapped badly. It must be from your dad. You got your bad wrapping gene from him, along with all those allergies. You open the box. There is a little coupon. It’s written on a post-it. No allergies.

You look up and your mom is smiling. Beaming. We’ve really outdone ourselves now, Jeff, she says, or he says, you still can’t tell them apart. And there is anothercoupon. Telling them apart. Also written on a post-it. You take it and someone says, You want to cash that in, hon? And you say sure. And they unscramble, your mom and dad, Mom’s in her curlers again and Dad’s smoking a cigar, they smell like Mom and Dad and mothballs and not alcoholic movie stars, but then it stops. It lasts a second, maybe less. And they’re in those suits again. And they are smiling, behind the masks, you can feel it. You can feel them becoming the same, stitching together, like the time they glued themselves with crazy glue and walked around the house.

They had wanted to get a divorce. You heard them, talking about it in the basement. That’s where they went for date night, they watched 80s movies. But they just ended up arguing. How come you’re not like this guy from 16 Candles, and how come you don’t hold up that radio for me by the bedroom. But I live with you, was the answer.

They wanted to get a divorce and run into a different movie, but they couldn’t. They couldn’t because of you. You were like that annoying guy in the movie, the one in 16 Candles, who liked Molly Ringwald, who stuck around so much she was sidetracked and couldn’t go off with Jake. He was the hero. She ends up with him eventually but it takes awhile. They are like Molly Ringwald feeling sorry for the nerd, for you, they can’t give you up and end up with the hot guy. Even though that’s all you want. To open the box and find a box inside a box, a box with a post-it cut in half, that says split, a hot guy for him and her.

Leonora Desar's writing can be found or is forthcoming in Passages North, Harpur Palate, SmokeLong Quarterly, Devil's Lake, Barrelhouse (online), an anthology of the Bath Flash Fiction Award, where she was shortlisted, and elsewhere. She also received an honorable mention in Glimmer Train’s Very Short Fiction Award, and was a finalist for Black Warrior Review’s flash prose contest and SmokeLong Quarterly’s Kathy Fish fellowship. She lives in Brooklyn and holds an MS from the Columbia Journalism School.