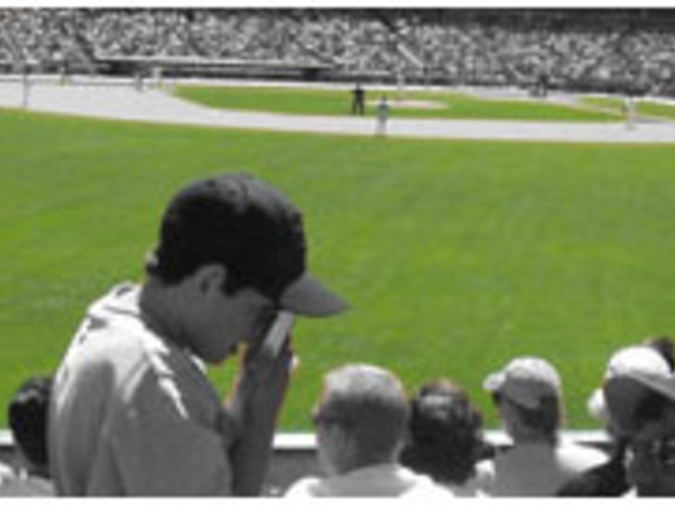 Tony Montes had always dreamt of the moment he would stand in left field at Candlestick for this, the third game of the World Series. In his dreams, however, he wasn't 48 years old, and he hadn't climbed over the rail from his seat to get there. In his dreams he wasn't standing on the field with 10,000 other fans, with the rest trying to get out of the stadium quickly. And in his dreams, there hadn't been a 7.1 earthquake.

When they were reasonably sure that Candlestick wasn't going to fall down on them, the police told everyone to go home, which was easier said than done. It was difficult enough to get out of there in normal conditions, but now the freeways were collapsed, or closed. The power throughout the bay area was out. No traffic lights worked, which for some drivers meant anything goes. Tony lived in the Marina District which, ironically, was built on a landfill from the '06 quake. The Marina District was at the northernmost point of the city, and Candlestick the southernmost. Even in the worst of traffic, the trip home never took more than thirty minutes to get home. On this October evening, it took him four hours of inching along nervous city streets, through neighborhoods he would just as soon avoid. Places like Hunters Point and Portero Hills, around the western edge of the city and eventually to the more comfortable enclaves of Sunset, Golden Gate Park, Richmond, around the Presidio, over Pacific Heights, to the Marina.

When Tony pulled up to his house, his neighbors, Mike and Max Andreotti were standing where his driveway used to be. Technically, you could say the driveway was still there, only now it was covered by Tony's new bathroom addition. He recognized the water saving toilet he had just installed.

The house looked alright, except for the corner bathroom now spread over the driveway. A quick glance around the neighborhood showed similar damage to other homes, some worse, some apparently unaffected. Some rose from nearby streets, with more fires in the distance. He knew from his journey home and the radio that the Transamerica Pyramid was still standing and the other skyscrapers seemed to be intact. Coit Tower was still there. Alcatraz and the two bridges he could see were still above water.

Next door, the Andreotti brother's garage appeared to have collapsed around their Cadillac. "We turned your water and gas off," Max said, holding up a large pipe wrench.

"I told you the Big One was coming," Mike said, almost pleased that his perpetual forty year prediction had finally come true.

"You were right," Tony said.

"Were you at the game?" Max asked.

"We were at the last one, you know," Mike said. Tony knew he meant 1962, twenty seven years before. They had talked about it many times. It was the last time the Giants were in the Series.

"Twenty-seven years ago, yesterday," Mike continued. "October 16, 1962. Ninth inning, one to zip. Yankees ahead. Matty Alou on third, Mays on first. McCovey hits a line drive that should have won the game. But Bobby Richardson, the Yankee's second baseman, makes an unbelievable catch and the Yankees win the series.

Tony remembers hearing that game on Armed Forces Radio. At least two hundred thousand San Franciscans now claim to have been in the stands that day. But Tony knew the Andreottis had really been there. He had seen their program, and knew they had followed the team since their arrival from New York when they still played at Seal Stadium. They often reminisced about the Seals from the old Pacific Coast League, in the days when major league baseball only crossed the Mississippi River far enough to play in St. Louis.

"That was a sad day for San Francisco," Max said somberly.

"That was about the worst day of my life," Mike added sadly.

An ambulance followed by a fire truck screamed past, as the three men, heads bowed, nodded in solemn agreement.