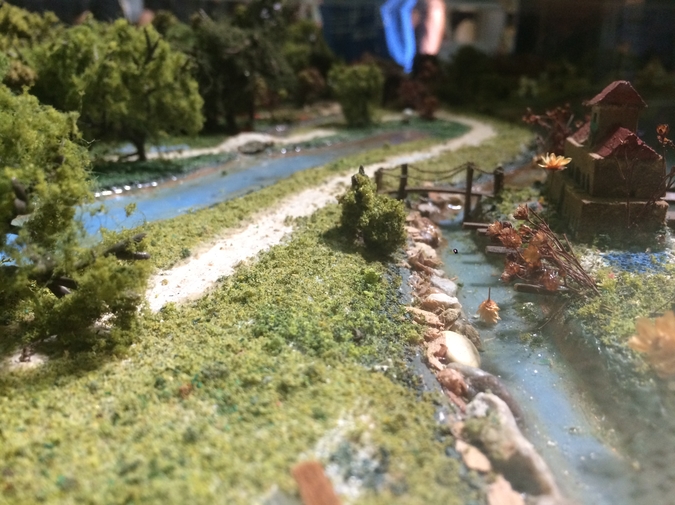 It doesn’t make the sound that you think it would make. I mean, I figured it would be loud, or top-heavy. But it sounded like almost nothing, like water dripping from a shower faucet three rooms away. The only reason I knew what had happened at all was the communion table splitting clean in half, scattering the grape juice and the crackers everywhere.

I stepped over Jesus’ body and his blood on my way out.

The church was the biggest building in our whole neighborhood, which is to say, it was small, so small the mural painter could only fit two members of the Holy Trinity onto the biggest wall. My father had to reassure the town that the Holy Ghost was invisible, anyway, and lived inside of all of us, so, it was fine either way. My father was the head pastor. And on Sunday morning the town—all three hundred and two members—entered church and saw the broken communion table and all that spilt body and blood.

Well, there were murmurs.

Martha Lou, rubbing coconut lotion into her palms: “I mean, I’m not one for superstition but, we find little Mary’s body, and then all this madness with the table—!”

Bobby Greene, with an only half secured toupee: “—I heard Mary was with child, that tiny little thing, and what, only nineteen—?!”

Jilly Jean, who carried washed Tupperware in her purse, just in case: “That little thing? Not even old enough to be married, much less—well, and just the other day she was baptized by the head pastor himself, practically reciting his sermons verbatim, and then all this—”

Bill Lewis, who routinely lied about golfing on the weekends: “Pregnant and everything, oh, the poor thing, well, I’m sure this isn’t the first young unmarried girl who winds up with a baby and then, you know, winds up dead, as horrible as it sounds, I mean, you know—”

And they did know. Everyone knew.

It got so bad, during his sermon, my father threw in a line about faith, and always having it, even when strange things like young girls dying too soon and communion tables breaking clean in half happened. And that was that: my father had spoken. The murmurs stilled almost instantly.

Father, gruffly: “Son, hand me that piece of wood.”

He was making a new communion table. Corkscrew wood shavings littered the floor—tiny pieces of holy to be swept up and thrown away. He was building God from scratch—tiny pieces of conviction and power that would be collected with the care of a creator molding his creation, to be put into the pockets of people’s minds until they forgot that it was there altogether.

From outside the church window, you could see the track field. Four boys, lanky and tan, were racing against each other. First one pulled ahead, then another, then another. Girls on the sidelines stood cheering, occasionally ripping up grass and throwing it at each other. Finally, one of the boys—the one with long hair—won. He sprawled out on the track, chest heaving. I watched him throw his arms up in the air—another triumph over the invisible ghosts in our sky.

Me, ignoring Father: “They’re saying that Mary was pregnant when she died.”

Me: “And I’m thinking, well, I’m thinking about all the times we had her over. Especially when mom was away. I’m thinking, like, she stayed late a lot, and, you were gone a lot, with her, I’m guessing, and well, now she’s dead. And so, I guess—I guess I’m thinking, it was you and it was your baby, and well—well, I’ve heard the stories, you know, about unmarried girls and their babies and the people with reputations to keep who kill them. So.”

Father had stopped sanding the table. His hands were shaking. Hard. He said nothing.

Then, Me, again: “I went into church yesterday, after they found it, you know, her body? And I think I heard—I think I heard god. Except, he didn’t say anything, it just sounded like he was running. Running away. From you—from us—from everything.”

There was a silence. Well, an almost silence. I could hear something like a shower faucet, dripping three—maybe even six or seven—rooms away.

Adesuwa Agbonile is a Seattle native who is currently an undergraduate at Stanford University. She is passionate about stories, both real and imagined. Her work has never been published before.