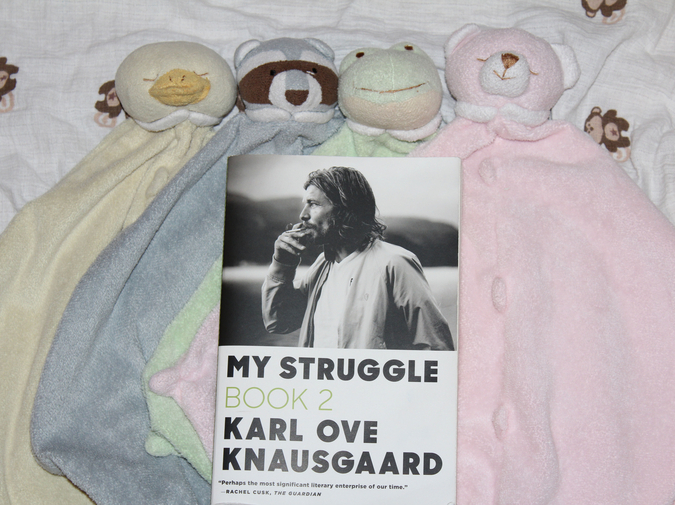 My daughter made pee pee in the potty, and my mother, who watches her on Wednesdays, shared a moment of pride with me before offering to do the pee pee dance, much to our collective delight. I left them giggling in the bathroom, so that they could wash hands and brush teeth and get the day officially started, while I gathered up my backpack and lunch sack by the front door. I snuck back for a quick hug and strawberry toothpaste-filled kiss and then headed off on foot for the train station. The day was sunny but still cool from the overnight dip in temperatures. The walk was refreshing. I experienced a rare feeling of complete contentedness, in which I could appreciate everything I have in my life and see one of those stick figure decals of two parents, two children, and a dog on the back of an SUV and not reflexively mock the car’s owners.

A week later, my daughter was riding a three day streak of “accidents” that were clearly not accidents – she was urinating in the toilet without fail but refused to do anything but shit herself with her bowel movements – and my mother wanted to put her in pull-up diapers when they left the house. My wife and I had already discussed this option and decided against it the night before, not wanting to encourage any further backsliding. We didn’t want to sacrifice the progress we’d made with her toilet training just to spare my mother the task of having to clean up her granddaughter’s poop. We were stuck in a power struggle with our daughter and had decided that the best tactic was to ignore the conflict altogether, pretend that the accidents were no big deal, just a hiccup that would soon go away. Now my mother seemed to be posing the exact opposite tactic, and when we said no to her suggestion, my mother countered with, “Well, I’m just going to keep her home all day, because I can’t clean her up like that out in public.” We’d substituted one power struggle with another. I was greeted with another perfect summer morning on the walk to the train a few moments later, but I felt miserable as I put in my earbuds and cued up the previous day’s Pardon the Interruption podcast to drown out my thoughts.

Every day of parenthood offers a story (or stories), although the story likely only interests the specific child’s parents. Most “my kid did the funniest/craziest/saddest/sweetest/insert-any-superlative” tales are just slightly more bearable than a friend’s recounting the specifics of how he lost this week’s fantasy football matchup or a co-worker’s recap of her recent vacation. Still, talking about my daughter is the most natural thing I do: it sometimes feels like the only conversation in my day that requires no effort.  And so, in mixed company, I fall into the trap of countering someone else’s “my child” story with one of my own. Children are the singular topic of conversation, the way books and films and albums were the only topic of conversation a decade ago.

In My Struggle, Book Two, Karl Ove Knausgaard jumps around in time. The novel opens with him as a father of three, then he is a father of two, then of one, then an expectant father, and then again, by the end, a father of three. The specter of parenting, though, hovers over the entire book, and perhaps the greatest feat of My Struggle (among its multitude of great feats) is that the “my child” or “my children” stories are riveting. They are tedious at times, but they are riveting in their tediousness. James Wood, writing for the New Yorker, summed this up far more eloquently: “Even when I was bored I was interested (which is pretty much like life itself).”

The prose is often offensively prosaic; the scenes (such as they are) often painfully banal. Knausgaard wants his struggle to be your struggle, too; he immerses the reader in all the clumsy, extraordinary varieties of experience, from changing diapers to playing in a crappy rock band. . . Many writers strive to give you the effect, the illusion, of reality. Knausgaard seems to want to give his readers the reality of reality.

Knausgaard, therefore, appears to be telling the ultimate “my child” story, but, unlike most parents, he is willfully acknowledging how uninteresting these stories can be.

Furthermore, he openly addresses the drag that parenting can be, the way children can suck up your time, your energy, and your overall identity. When his mother-in-law offers to watch his daughter, freeing up his days for writing, Knausgaard hardly registers any guilt as he confesses how much he loathes being a stay-at-home father. He eagerly accepts her offer, and, later, when he suspects that she has been sneaking drinks from his liquor cabinet during the day, his consternation is equal parts fear for his daughter’s safety and concern that he’ll lose his newfound respite from fatherly duties. However, he also constantly rejoices in his daughter’s antics and, at other times in the book, the distinct personalities of his other two children. One of my favorite images comes towards the end of Book Two, when he describes the way he walks through his small town with all three kids in tow, proudly juggling each child and his or her needs, like a triumphant one-man-band playing harmonica, drums, guitar, and cymbals. The emotions of parenting ride a sine wave, in life and in My Struggle.

Early in Book Two, Knausgaard spends nearly 40 pages recounting the birthday party of his oldest daughter’s classmate, and the pages are a continuous ride on the ups and downs of this parental sine wave. We start with his daughter’s eager anticipation of the party (she gets to wear her new gold shoes), which is matched by Knausgaard’s and his wife’s desire to meet more adults in their new neighborhood. Then his daughter decides, on the morning of the party, that she doesn’t want to go, despite asking nearly every morning of the past week whether Stella’s party was today or tomorrow. Finally, they convince her to go, but she insists on carrying her gold shoes rather than wearing them and then shies away from the other kids upon arrival. Meanwhile, Knausgaard and his wife take turns watching the children and trying, unsuccessfully, to socialize with the other moms and dads who seem to be having a much easier time as parents and as adults in general. Knausgaard eavesdrops on conversations about new television screens and vegetarian-friendly kid meals as if he’s trying to decipher a foreign language (which, to some extent, is true given that the conversations are in Swedish and not his native Norwegian). By the time he finally leaves the party, late in the evening, he is as much frustrated with his daughter’s behavior as he is dejected about his own performance – “an awkward little boy among his peers, desperate to run away from the forced jollities and the sickly cake” (James Wood, again). Knausgaard’s “my child” stories, exemplified by this kids’ party saga, inevitably become stories about himself, as do every parent’s “my child” stories.

Last weekend, I took my daughter to a park that sits astride the Hudson River. It’s both her and my favorite park: she loves the equipment there, which is newer and more kid-friendly than the old jungle gym down the street from our home, while I savor the river views and the temporary delusion that we live “on the water.” My daughter was late to crawl, late to walk, late to run, and, physically, still lags behind some of her peers at day care. Some of this, my wife and I suspect, is lack of confidence in her own strength. Therefore, when she approached a climbing web at the park, a physical challenge she’s repeatedly shied away from, I was thrilled. She stumbled a few times on her first attempts, not quite sure of the best strategy for her hands, commanding me, “Hold my nalgas!” (She is being raised bilingual so often constructs her sentences with this kind of Spanglish.) By the fourth or fifth attempt, she was climbing the web on her own. I yanked out my phone, captured the feat on video, and sent it to my wife, who was working, and my mother, who on Wednesdays takes her to physical therapy. After a while, although my daughter did not bore of the climbing web, I did. I turned away from the park and towards the river. Underneath a tree, an elderly couple was sitting at a small folding table, playing some sort of card game and sharing a bottle of wine. They looked so comfortable. I envied them. How nice it would be to just sit here alone or with my wife, either way, spending an entire day in a tree’s shade, drinking wine, reading a book, taking a nap, conversing about something topical. We’re expecting another child in two months, so I calculated about eighteen years before we’d get the chance to have one of those carefree days. I turned back to the park and my daughter, still going up and down the web. “Daddy,” she said, “are you watching? Are you so orgulloso of me?” I answered in my best Spanish, “Claro que si!” “Daddy,” she said, “are you feliz?” The answer, of course, was yes, although yes with an explanation, a yes that is sometimes easier to say depending on where I am on my own parental sine wave, but I had no way to express that to my daughter, in English or in Spanish, so instead I just smiled at her.