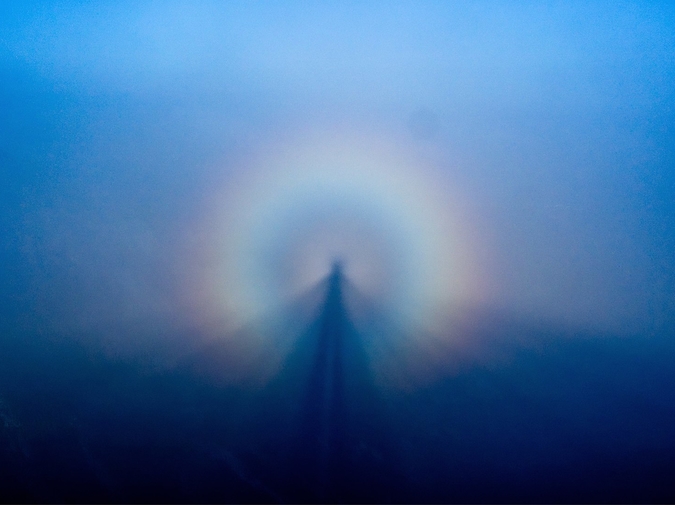 We first heard about them from an online news magazine, one of those articles that appears in your feed and makes you wonder what bullshit you clicked in the recent past that’s led to the bullshit before you. It was a night which felt very much like a Wednesday.

I read the article and passed her the phone. We both watched the grainy, black-and-white footage that accompanied the piece in five-minute snippets. We heard the Navy pilots—clearly young, white dudes who, I’m sure, were talented flyers and well trained, but who nevertheless said things like Fuuuck, man! and Target it, bro! Get a lock on that shit! through their cockpit radios. The footage was indiscernible: a white dot, like a ping-pong ball, moved across a field of gray, while arcane aeronautical figures decorated the four corners of the screen. Sometimes a digital box would appear and hover over the ball, follow it for a moment, and then evaporate.

“This could be anything,” she said, which was true.

“I think the footage is from far away. I’m sure it means more to a pilot.”

The magazine article told us that these were U.F.Os. Each one was in excess of four hundred feet in length. They moved at speeds exceeding MACH-30. They turned, suddenly, creating G-forces too excessive for a body to withstand. “… would turn a human pilot into applesauce,” was the offered description, which I found gratuitous. They looked just like gigantic, white Tic-Tacs.

She didn’t believe it.

“Where was this published?”

“Does it matter?” I said. “Crazy it only has five likes, though.”

“It’s banal.” She handed the phone back, looked around, reached for her own. “Everything’s banal, now. If we can imagine it, then it’s not surprising.”

We fucked that night, which surprised me. She turned toward me in bed, with that I’m receptive look. Something that evening had reminded her that I was alive, but I didn’t necessarily believe she was right. It took twenty minutes, and afterward I told her that I liked what she’d done with her feet.

The following day, I take the kid to school. I say, “Good morning!” quite successfully to the four other parents I pass on the paved walkway, and then kiss my little girl in the door of her classroom. She locks her arms around my neck, and, like every morning drop-off, I feel the pressure of tears welling around the bridge of my nose. I tell her not to forget there are sneakers in the purple bag for gym class.

The radio news on my drive to work describes a massive blackout in Buenos Aires. Something atmospheric, something about magnetic field radiation. It’s difficult to ascertain the cause, the anchorwoman says. Any updates that come in after the broadcast can be found on their website.

I’d done a tricky thing the day before, which was most likely a Wednesday. I’d managed to machine a perfect, ninety-degree, beveled interior angle into a decorative brass fixture and my boss is there holding the piece when I arrive. He has a genuine-looking smile on his face. He asks how I’d persuaded the CNC mill to make such a cut, and I explain my approach. He says, “You’re a smart cookie,” because the operation has saved his shop maybe six hours of meticulous handwork.

I reward myself with a cigarette. Cars go by. Some of the drivers look at me. Some don’t. Like flying fists: cars that kill people, people that die in cars. Just trying to beat the clock. I begin to notice my fear, and as the yellow cigarette paper meets my yellow fingers, I see that my hands are shaking. I carry the cigarette into a bathroom. Not the convenient bathroom, but the one off the back hallway with a lock on the door. I drop my cigarette into the toilet, close the lid, sit on the toilet, and rest my head against the nearby wall. I count multiples of seven and listen to the ventilation fan until the fear and the happiness go away.

I cook that night. Blackened cod for us, and just lemon-salt cod for the kid. The little, knotted rolls from the market which I buy when I’m feeling hurried. Asparagus, which I overcook, evidently, because she won’t touch it. The kid doesn’t eat the fish and my wife doesn’t eat the asparagus and I don’t eat much of anything.

“Did you hear about Buenos Aires?” she asks.

“Something, but I was only half-listening,” I say, anticipating some kind of punishment. “What’s up?”

It isn’t only that Buenos Aires is gone. It’s also Kuala Lumpur, Kandahar, and—most perplexingly—Helsinki. Drone images on the television reveal acres and acres of land that has been…scrubbed, I guess, is the best word.

The land looks like those salt flats in the southwest where speed records are made. Rocket cars, rocket bikes, tearing over the light-bleached expanse. That kind of thing. But in these cases, there are no fissures or cracks, no indication that the flatness is the result of some ancient lake having evaporated. Just a blank, white flatness. So perfectly flat, in fact, that you can see the drone’s reflection shimmering below in each aerial video. Hi, the little robots seem to be saying, I’m reporting to you live from the most complete genocide perpetrated in recent memory.

The news anchor—it’s a local broadcast—talks about all this like a curiosity. He might as well be discussing a beached pod of whales, with his Isn’t life so mysterious? tone. “White sand … It’s a heck of a thing to look at, isn’t it, Janine?” I can’t tell if he’s sincerely an idiot, or if idiocy is just what he imagines we want.

I feel compelled to talk about the disappearance of several major cities at work the next day, but it’s a difficult segue. The break room is silent and empty save for the choking coffee maker. I stand with an empty mug in hand, waiting for it to finish, and then walk onto a shop floor that’s dense and hushed as a coral reef. Men can be found here and there, hovering tentatively about the machines, waking up.

“Coffee’s done,” I say in a low tone. Nobody likes chatter in the morning. Finally, Alex—the new guy—brings it up by asking if anyone has heard about Helsinki. Alex only mentions it because he never has anything funny to say, and probably figures it worth the gamble. He has no status to lose, really. To his pleasure, the room has several comments:

“The hell are you getting your news from, Bob?”

“Not those fuckin’ hippies on eighty-nine point three, that’s for sure.”

“I heard about Kandahar, but Helsinki’s white, isn’t it?”

“I bet a neutron bomb would …”

“You mean the church shooting?”

My boss seems distracted and unfriendly and says something about pushing due-dates back by a month as I come in from a mid-day smoke. He’s speaking to the room, but I hear it like I’m the only one there. Time is bleeding. Within twenty minutes, I’ve made three simple mistakes which set me back by a full day.

It’s not until driving home that I hear anything more. It seems that someone on the outskirts of Calcutta has captured the very moment that their city was scrubbed. They’ve recorded it on a cell phone as they waited in rush hour traffic. It’s a woman’s voice that you heard in the recording and presumably she has family in the city and I’m glad I don’t understand Hindi. The earth blazes with light, I’m told by the foreign correspondent, with her English accent. It takes approximately ten minutes, and much heat is involved. When the light dies away, the city is gone, and something resembling an enormous, white lozenge hovers above.

When I was ten, I lost my best friend in a dispute over a tire swing. His dad had dropped him at my house, like most mornings that summer, and we’d already exhausted the usual retinue of mud-ball fights, sharp-green-stick fights, and rock fights. We’d shot dolls with pellet guns, and shot birds with pellet guns. We’d set a small fire, which only died for the humidity. Finally, bored with destruction, we decided it would be fun to have a tire swing under the oak tree out back. The tree was a sentry for our carefully civilized yard, holding back the chaos of brambles beyond it.

He was a bit more robust, so I let him climb the tree and secure a wrist-thick hemp rope to a branch. I coached his knot-tying from the ground. We argued for some time over the height of the tire, the clearance needed beneath it, and other matters of physics. When everything was cinched and weight-tested, I threaded my legs through the tire and walked it back until the rope was tight like a piano wire. My friend stood next to the tree, his hands in the pockets of his sweatpants. The unspoken rule dictated that I would swing first.

“No,” he said again. He was harboring something, some grudge, but I decided not to make it my concern.

He shrugged, but remained.

My father would end up driving him home as I hung at the end of my rope and he cried in the back seat. We never really talked again. I remember the feeling of my left heel punching into the soft part of his abdomen, him making a last-moment turn and me striking him just above the hip. He rebounded like a deer from a car bumper, wide-eyed and rubbery.

I could have dug my feet down and stopped myself. Either of us could have relented, at any point. But I was only a pendulum, and the hour wasn’t mine to decide.

I stop for a whiskey at some tavern that only makes me feel old, and smoke several times before returning to my wife and daughter.

“Did you hear about Calcutta?” I say, to gain the upper hand.

“I didn’t know we needed milk.”

We eat dinner, and my little girl drinks water because I’ve forgotten the milk. She hugs me before ascending the stairs and washing up for bed. Stomping, singing, jubilant, four years old. Her happiness rips the scab off my fear, every morning, every night. I let the dishes wait and walk into the back yard to smoke, sip a beer. Looking up, I notice a specific lack of stars in the southern portion of my view. An oblong blackness, moving unhurriedly toward the light-polluted center of the city. No matter where it travels, it takes up half the sky.

The lights die. On the street, at the neighbor’s, in our kitchen. I text my wife: “They’re here.”

We stand together in the yard, several feet apart, and both crossing our arms against the autumn chill.

The Tic-Tac has placed itself over downtown. I check my phone for news updates, but it’s unresponsive. We watch as helicopters beam their spots against its featureless mass. The ground seems to tingle.

“There’s probably not time,” I say, as the air temperature grows noticeably warmer.

“Should we make love?” she asks.

The heat comes on fast, a wall of shifted temperature, and light begins to saturate everything around us. Small objects—clothespins, acorns, cigarette butts—come untethered from the Earth and float like dandelion fur.

Matthew Stephen Sirois' fiction and essays have appeared in Split Lip Magazine, Necessary Fiction, Sundog Lit, and elsewhere. His novel NEAR HAVEN was an IPPY medalist in 2017, and he occasionally reviews for the New York Journal of Books. Matthew currently lives in Massachusetts, where he works as a metal fabricator.