The Sweet Things We Shared 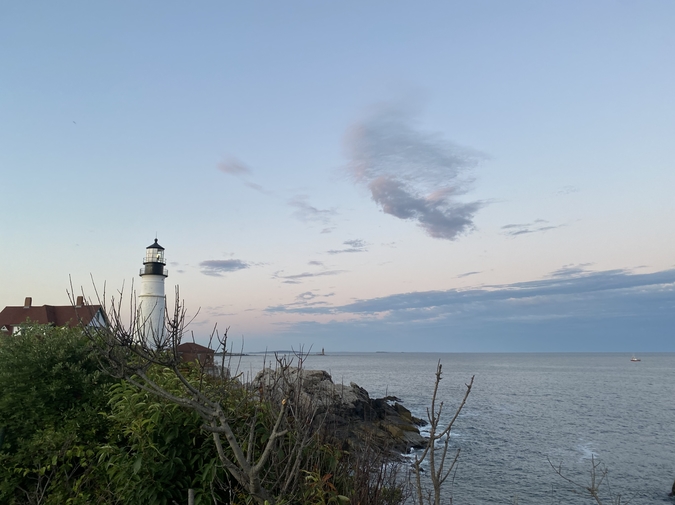 Sangria at a soup shop. Pieces of peach and apple in the wine. The skin of the fruits unpeeled in my mouth. Sangria even though it was winter, early evening, cold and already dark out. Goblet-sized, so it dwindled with many petite sips.

A dark purple smoothie in a mason jar. Made of berries, blended even, but the seeds were still visible. It came in a glass; so it could not be taken to go. We were expected to stay awhile, enjoy it. I don’t know what they used to puree the fruit and ice together. Coconut milk? Orange juice?

There is nothing quite like smacking your lips on a treat while driving. I had flown pretty far before the driving began, and the smell of airplane clung to my jean jacket the whole trip.

The Starbucks lemon loaf. The sour of the lemon wholly masked by the globs of white glaze on top. The lemon cake buttery, soft on the inside, hard where the white frosting seems frozen over. I chewed each bite slowly. More chewing often liberates the sugar in foods. More chewing makes plenty of things taste better. If you keep a cracker in your mouth long enough, it unravels into its sucrose parts. Even a saltine, in this way, will go sweet.

A chocolate chip cookie. A big one, that left crumbs on the pads of my fingers. The outside was baked until crunchy but the inside dough remained gooey. I pinched off pieces and handed them over the divider in the front seat. I snacked on this as we sped to the airport, and then opposite coasts.

Is this cloying yet? A donut dunked in hot sugar, from a charming convenience store by the water. After a bite, we have to order another. It’s too much to finish the second one though. This is the kind of sweet that seems like a good idea, until your gums tingle or the roof of your mouth feels shredded or your head starts to ache.

That is a familiar sensation to me. After a donut making class, my sister and I took beignets and bombolonis and churros in brown paper bags, sopping with oil and soaked in cinnamon. Back home, we clutched our twisting tummies and passed out as we crashed from the sugar high. When we woke up from our nap, our temples were still pounding.

Fudge from an old fashioned candy store. The candy came in hand-wrapped cellophane, the taffy stretched in the window, the chocolate rolled and melted and sliced before you. The fudge comes in flavors like caramel and champagne and coffee swirl. I scooped a dollop with just my pinky and even that taste was so rich I needed water. I handed them over.

Sour cherry vodka and pink lemonade. The color alone to be savored: that hue you see in a glorious sunset, the shelf of clouds cottoned and ruddy, the whole sky flushed.

Black sesame seed banana bread. No nuts, I checked, so I knew I would be fine. The bananas they used to bake it must have been spotty or brown because otherwise it won’t come out so sweet. The bread made its bag a little damp, its sesame seed crust marbled with brown sugar, more sweetness caked to its frame. I wondered if you had split this particular pastry with a woman before, and how recently.

Ricotta pancakes. Yellow-ish, round discs, fluffy inside, bubbles in the batter still apparent once off the fryer. They were drenched in chocolate chip syrup. If a syrup can’t decide between maple and chocolate, I promise I will adore it.

Greek yogurt with dried cherries, honey marking narrow crevices in golden gullies. Honey dripping down the side of a small porcelain dish. Honey in yogurt cuts the tanginess. Like honey in black tea, like honey in any bitter thing.

Serena Alagappan is a recent graduate of Princeton University, where she studied Comparative Literature and Creative Writing. Her work has appeared in The American Journal of Poetry, Scientific American, The Oprah Magazine, Hobart, The James Joyce Quarterly, The Oxonian Review, and is forthcoming in The Colorado Review. She is currently pursuing an MSc in Social Anthropology at Oxford through a Rhodes Scholarship, and working as an Editor of the Oxford Review of Books.