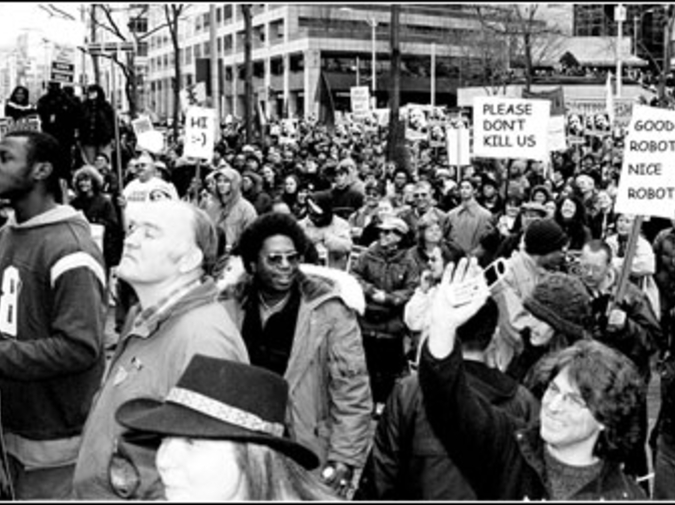 The Robot is constructed from only the finest and shiniest of all bolts and metals. All of it is stainless steel, because rust on a robot of this calibre is unacceptable. Total height of The Robot is 200 metres or 656 feet, if you prefer. If you enter The Robot via the door in the left heel, there are seventy five flights of stairs. Or, if time is a factor, there is an elevator, accessible via a door in the right heel.

The abdominal area contains several different rooms. There is a kitchen, a gym, a wine cellar and also a room with a 42” plasma screen TV and extensive DVD library. The walls are decorated with classic film posters like Arsenic and Old Lace and Les Quatre Cent Coups. The next four floors up, from mid Robot abdomen to Adam’s apple, are bedrooms.

The cockpit and central control system are located in a comfortable and spacious room just behind The Robot’s eyes. This room is carpeted with a tremendously soft and inviting plush purple rug. So inviting is this rug, in fact, that all visitors to the cockpit/central control room are immediately struck by the urge to remove their shoes and socks and freely wiggle their toes in its fluffy purple goodness. An old, worn in, overstuffed brown sectional couch creates a semi circle around the edge of the back half of the room. This couch is called the Done-for-the-Day couch because anyone who sits on it is immediately overcome by paralysing waves of comfort and relaxation. They will convince themselves that a quick nap will be okay. This is when they officially become done for the day. They will sleep and sleep and sleep and when they do wake up several hours later, they will feel like they used to on all those cold winter mornings when their alarm clocks would wake them at 6am, forcing them to abandon the warmth of bed for the frigid bedroom and a new day of work. But here they will have a choice, and they will choose more sleep and warmth because:

To the left of the Done-for-the-Day couch is a wooden floor to ceiling bookshelf which runs the entire length of the room, right up to the four steps which lead into the sunken and curved area known as The Cockpit. The Cockpit is lined with computers, microphones and assorted things that light up and beep. A total of twelve chairs sit along the control panel and it is here where all major decisions are made.

To the right of the Done-for-the-Day couch is a small flight of shiny white stairs which lead to the very top of The Robot. This area is called The Brain, but it really has nothing to do with any of the controls or ongoing activities of The Robot. Up here the floor is covered with yet another plush rug; this one red and soft as wool. In the centre of the room is a round bar constructed from bamboo and resembling a sort of thatched hut. Various tacky, hand carved tiki statues are arranged around the bar, against supporting beams, snuggled into the thatched roof itself. Sometimes a monkey, who dresses in jeans and cardigans, sits on the roof and other times he passes us the liquor we crave. Often we have no idea where he is. Aside from this helpful little creature, no one is officially employed as the bartender. We will take turns getting one another drinks, but for the most part, the majority of us drink simple drinks like bourbon or sherry, so there is no need for any sort of advanced mixologist.

There are four large speakers in this room, one in each corner of the ceiling. The music is piped in from The Cockpit and an intercom system attached to one of the bar’s support beams allows those who are mingling in The Brain to communicate their requests for music to those in the cockpit with the touch of a button. Popular selections include John Coltrane and The Band. Various chairs litter the room, most of them featuring unbelievable reclining capabilities and devastating massage functions. There are a few low built coffee tables here and there as well as some coasters.

The roof is one large skylight, which we call The Comb Over because it is retractable. We like to open it when the days are sunny and warm, or when we’re at the beach.

Currently, fifty seven of us live and work in The Robot, but there is room for a total of seven hundred and fifty nine. I don’t want to confuse anyone; we’re not some weirdo cult or collective, trying to shun the outside world. No, no, nothing like that. We’re just a group of people united by the fact that all of us at one point in our lives grew tired of bosses and running to catch packed commuter trains and spending five days or more out of our weeks working jobs that were pointless. So we quit our jobs, built a giant robot and things are much better now.

That’s not to say that things are always perfect, though. Some people have difficulty accepting The Robot. For instance, there was this one time a few months back when the sun was shining brightly and there wasn’t a cloud in sight. A perfect day. We decided to head out to the beach and spend the day there. We had some cocktails, listened to some jazz, smoked a bit of grass and once we got out of the city, we opened The Comb Over to take in the clear blue sky all the way to the beach.

It wasn’t until three weeks later, while Ayumi was watching the morning news that she learned that the Metropolitan police were still not calling it quits in their three week long stand off with a giant robot. Apparently and unbeknownst to us, The Robot had accidentally stepped on a police cruiser on our way back from the beach. No one was hurt – the police officer whom the cruiser belonged to was buying a coffee in a local Dean & Deluca at the time, but he returned to find his vehicle little more than a stain on the street. Backup was called in, along with the SWAT team and riot police, who fired a record number of tear gas canisters and issued repeat warnings to surrender over a loudspeaker system. All of this came as a complete shock to us when Ayumi broke the news, but the more we thought about it, the more we had to admit that maybe the sky had seemed a little hazy lately. So a few of us pressed our faces to the glass of the cockpit windows and looked down on to the street as best we could. Sure enough, there was a sea of little black dots, looking pretty darn threatening, even from that altitude. We weren’t really sure what to do. We discussed the situation as a team (except for the monkey because he was busy trying on some new cardigans that Karen and Omar had ordered for him from J. Crew) and concluded that all we could really do was apologise. We picked Parveen to do the apologising because she has a very nice phone voice and we had all also heard somewhere once that in general, people find women’s voices less stressful than men’s. So Parveen sat down in the cockpit and pulled the microphone toward her. She tapped it a couple of times to make sure that it was on, but tapping it just made it feedback and that spooked the cops and they fired more tear gas which I think bounced off The Robot’s knees. Parveen cleared her throat, licked her lips and nervously leaned into the mic.

“Hello?” We could hear the squeaky slamming sound of The Robot’s mouth opening and closing, purposely out of sync with Parveen’s voice. (This out of sync mouth had been Nigel’s idea when we were building The Robot. It serves no real purpose other than aesthetics.) “We just wanted to say that we didn’t mean to step on the police cruiser. It was an accident. We’re very, very, very sorry… Please stop shooting tear gas at us now…Thank you.” They might have stopped shooting tear gas right then and there, but to be honest, we didn’t really care either way. It was an accident, after all.

As it turned out, the monkey had enjoyed his new cardigans from Omar and Karen so much that he started making Singapore Slings, and no one, absolutely no one makes a Singapore Sling like that goddamned monkey. They are unreal. We still can’t figure out how he does it, but they are perfect in every way possible. So we all forgot about the crushed police cruiser and headed up to The Brain where we had a great time drinking Singapore Slings, playing Twister and listening to Astrud Gilberto.

And that was really the worst thing that has ever happened to us since we built The Robot and moved in, which in retrospect, wasn’t so bad at all.

Anyhow, lately we spend our time working on plans to install four huge booster rockets just below The Robot’s knees. We hope to have these in place by winter because we’d like to head to Cortina. A friend of ours told us that the skiing there is excellent. But who knows. There’s no rush when your days are spent inside a 200 metre (656 foot) Robot, and that’s just the way we like it.

Mike Jones wants you to know that this piece is the second part of his three part "Utopian Trilogy". The first part can be found at Thieves Jargon. The third and final part is still in his brain somewhere. Other online sites where his work can be found are McSweeney's,Opium and Wandering Army. In print his fiction has appeared in The Duck and Herring Co's Fall Pocket Field Guide 2005 and is also forthcoming in Monkeybicycle's comedy issue.