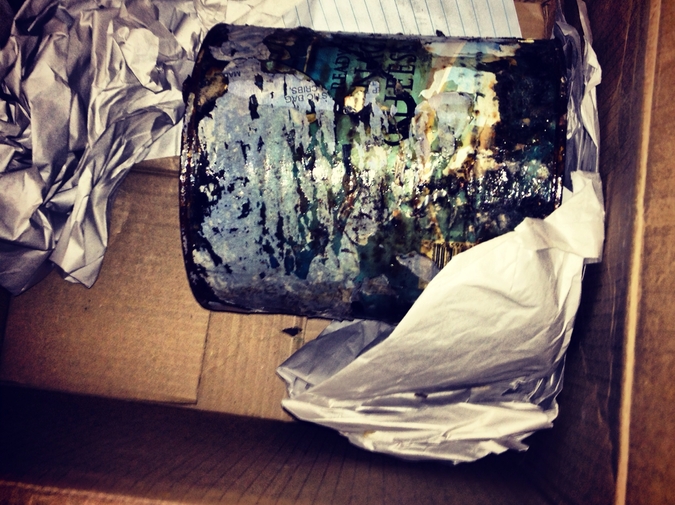 Lyle worked the night shift in a millwork factory, manning a machine nicknamed the Pincher. Everyone hated the Pincher. On the day shift they kept going through operators. Before Lyle, the longest anyone else had lasted on the Pincher was two years. At least that was how the story went. Lyle hated the Pincher too, but he’d learned to live with it. He’d been there nine years and would be there another nine if they let him. By then he’d have enough saved up for a nice house, one with stairs and a workbench and actual carpeting.

The Pincher was a hulking beast of a machine, twenty-two feet long and ten high, but the way the beast worked was simple. Lyle would feed it rough-hewn planks by conveyor belt, and the Pincher would spit back out cut lumber in standard sizes. Then Lyle would sort the lumber and distribute it to other conveyor belts. Simple. Sure, there were computers and buttons involved. He’d been trained on what to do if the Pincher started acting up. But the job wasn’t complicated. Most anyone could run the beast. Decent pay, too, all things considered.

Thing about the Pincher was – the reason turnover was so high – the Pincher ejected its payload sort of randomly, with such inconsistent and occasionally frightening speed that the cut wood had a tendency to pinch however many fingers happened to be overhanging the steel receiving rail. Gloves, especially the padded variety, made Lyle’s fingers sweat, and sweat made his clinically dry hands burn like all get-out. So Lyle didn’t wear gloves.

He’d mentioned it to the foreman, the unpredictable nature of the Pincher. Couple times. How unsafe the beast really was. But no way Management was going to replace the Pincher. He knew it. Money, of course. Thing was old enough to be worthless in terms of trade-in value. Always came down to the bottom line.

What did dull the Pincher’s inevitable pain was liquor. Specifically, three pulls of gin prior to shift, another at each break, and two at dinner. One night, as he washed down his customary driver’s seat dinner of bologna and cheese on Wonder bread with a pull from his flask, the foreman knocked at his window. In a fright Lyle dropped the flask and spilt gin all over the wax paper in his lap.

Like any conscionable man he thought of his poor wife and baby girl, his bad luck, and what would they do after he got fired. He considered ignoring the knock. After all, he was hard of hearing, slightly. But the foreman was the type of man with patience for everything except being ignored. Lyle shielded the flask with his foot, unrolled the window, and awaited his fate.

The foreman leaned down to window-level. His face was pink and pockmarked.

“I still got six minutes on my break,” Lyle said.

“I know, Lyle, I know.” The foreman smiled and gave the cabin a scan. He seemed to fixate not on the smell or Lyle’s lap or the vicinity of the flask but instead on the Jesus bobblehead on the dash. Still, Lyle was not optimistic. In his mind he prepared an inventory of items he could sell to keep the family afloat. The snowmobile, for one. Various taxidermy. His wife’s beat-up Cavalier. If it came down to it, the autographed ’91 Series ball. He really hoped he wouldn’t have to sell the ball.

“Figured you’d want to know we’re shutting down the Pincher tonight.” The foreman blew into his palms and rubbed them together. “Routine maintenance. Be up and running by first shift.” Lyle waited for the subject to gravely change. But: “After break, head over to Line B. They’re short tonight.”

“All right.” The words came out a frog’s hair above a whisper.

The foreman nodded at the Jesus bobblehead. “Didn’t figure you for a Bible banger.”

“No kidding? Huh.” The foreman started to say something, then shook his head. “Well, all right then. Let you get back to your dinner.” With that he tapped the roof of the car and disappeared from view. Lyle was stunned. Cold, too, owing to the blast of January that had invaded the car, a wind so cold it grabbed you by the throat and wouldn’t let go. Also the pool of nature-chilled gin that had saturated his crotch.

All through the rest of the shift he was on edge. He wondered who the hatchet man would be. Probably Silvernale, who so hated getting sawdust on his mirror-black shoes that the only time he ever appeared on the floor was to shitcan someone. But no one came to see him, Silvernale or otherwise. Even the line supervisor gave him his space. Soon as the final bell rang Lyle bolted out the door like a banshee. His heart didn’t stop racing til his tires hit the highway, and that night he slept fitfully, wondering if it wouldn’t be best to call in sick for a couple days.

The next night he was back at The Pincher.

First break he told Bernie all about the gin incident. Hadn’t the balls to mention it to his wife, but he had to tell someone. Bernie was safe, Bernie was a good egg. So just what the hell was the foreman up to, anyway?

“You know he used to be into meth real hard, right?” said Bernie. Lyle didn’t. “Like, bad. One night he tried to cook his own load. You know, like, battery acid and paint thinner and whatever the hell. No idea what he was doing. Boom! Exploded right in his face. Bad deal. Nose opened up like a book. To this day, dude can’t smell cow shit in a phone booth.”

Lyle couldn’t argue with that.

Still, he wondered if maybe the whole nose explosion story was BS and the foreman had just cut him a break. Nine years – he’d earned a break. Always showed up on time, always made quota. Plus the foreman didn’t seem like the addict type. Had a decent-looking woman and a litter of kids, four or five of ‘em. Girls. Though then again, with meth you never could tell.

That shift Lyle ran the Pincher dead sober. He was even able to stop thinking about the foreman for a spell. Stop worrying. The Pincher, the focus it required, helped.

A few more God damn smashed fingers, though, and that flask was bound to come out of retirement.

Ryan Ries lives in St. Paul, Minnesota with his wife and daughter.  His fiction has been published or is forthcoming in Bluestem, Revolver,and Unsaid.  He is currently shopping a novel and revising another.  His favorite color is red.