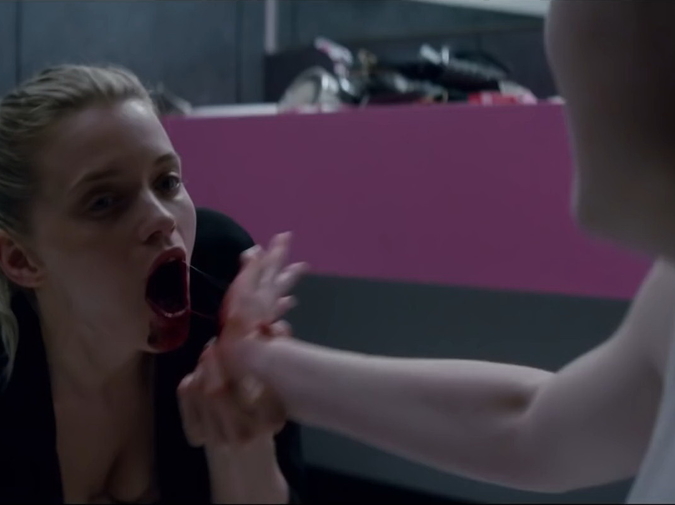 Only God Forgives captured impotence so precisely I had to keep tapping my crotch just to like it. I wondered if my guy would attend himself after the benefit. I think I’m mostly still there. At least I don’t have to break a lamp over it, or close it in a door, in order to sleep now, but that’s because I fucked the nerve endings a bit atrophied, and got old, not because Refn said so. It’s okay, to the great nausea of anyone feminine, The Neon Demon Viagra’d me back into my next divorce, not via the inspiration of actress bodies, those too, but also as a response to another hypnotic masterpiece no one will square themselves away with. Are you repulsed by looking in general and got a tin ear for injurious copulatory staring contests? Be one of two people in the theater with me. I was the guy hang gliding off the question mark of his masculinity. Bout to throw a bunch of movie references at you, because I don’t want women to mistake me for a potential mate. Don’t dress down the spectacle because Kubrick is how you frame most frames. It’s more mainstream Kenneth Anger than the operation capable of Paths of Glory, apples and puked orange bits, my main man. Who’s analogously deriding the dickride of homage to feel taller than the media? I will mouth drag you in the name of sparkles. Let’s not fuck whoever bows out of this one for a week. I’m back in worship mode because my dick is like its own amen again. I’m wallowing in polemical athleticism with the nipple span of a dog litter tied in back of a truck and I call eunuch on whoever shook their finger here. Hell, let’s stick a gun in our drawers and cut us both off. One of one or two things I admire ladies for is their ability to become narcoleptic during the rare events in which I really want to watch a movie together in a way that doesn’t mean sex. Attractive people hate cinema because its mesmerizing nature competes with theirs, but I don’t aim to counter your display with a celluloid proxy of my own! “You think you can fuck the opinion out of me by pressing play and mark it next to yours like we’re boys sharing a questionable night with yardsticks?” she might say, if anyone actually ever touched me. And I’m like: “Shut up” and “count your lucky stars” are the two phrases I understand in bed. No, ha, my dick fell off the second I decided against money. Should we vote for this movie? Internet gonna blast art into another campaign? My stripes are too ugly to promote healthy competition. For example: Liberals (person who tries liking art, unless anything's intense) want to be snug in an entity and are anxious if you talk mean. Conservatives (doesn't see art because: no monetary value) think of themselves as individual entities and speak accordingly. They’re both the type of person who wants you to be terribly involved in life, so involved that they hate even the suggestion that death could be an escape from them. No one left to punish with their views. If you pull this system down, the impact of its landing will replace the air. The need for food makes us inseparable from our feces. Chased forever by reloading caca, death only saves on toilet paper. The difference with film is I can ask the detractors what they prefer and find common ground in ten seconds and our compromise doesn’t impair the endeavor. Notice the curious delivery of these actors, the model monster’s eyes in the bathroom, everything Malone does. Thing about geeks is they’ll let you burn down their houses if you can follow up with a good discussion about cinema. People are just the mares under their craft.