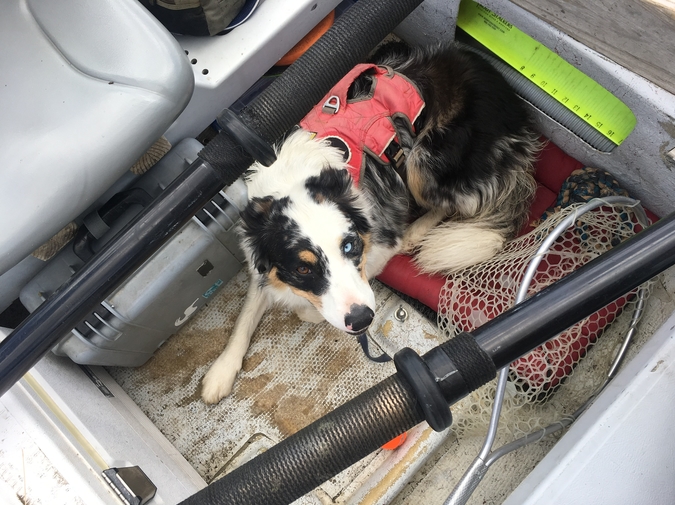 I wanted landscapes I could sink back into. I needed mountains to wrap around, rivers to rest naked upon, fields to drown in, an old snake skin stuck to the bottom of my boot.

We were in Ennis because it was the fly fishing capital of America. Jenn ordered a double-tier chocolate birthday cake from the only grocer in town and tucked it into our boat, its piped blue icing shaded under the boat’s plank bench.

What’s it like being an avalanche dog, I lean down and ask Merrick. What’s it like gaining on death, I say as we nuzzle noses. We all fit neatly in this boat — Tim, Riley, Jenn and I, Merrick laying quiet in the cradle of our tin can.

Tim kills the motor about a mile in and we bob in the current. He rolls a joint and passes it around as Riley ties onto her hook, flicking her wrist into the open mouth of blue sky.

When you’re in this kind of land, you breathe steel-pedal wherever you go. It was all we had on the transistor radio, a Jason Molina wail and a bottle of passed whiskey. It wasn’t like we were trying to laugh over the sounds of a singer slowly killing himself, but it was the most familiar narrative we could occasionally slip into without interrupting. There were talks of heaven, black hens, of getting busted, choruses of dead moons.

In Ennis, there aren’t many women. It’s mostly a town of men all trying to outdo each other. A drinking town with a fishing problem, Tim tells us. Tim feels special as our guide. He wants to take us out after, show us off to the boys. He says, y’all aren’t bad for a group of girls.

We pull to shore and muck through the water, Merrick shaking off his wet fur as we trod to land. It was just us and God in those fields of Montana. The fields have this tint of gold desperation to them. With every roll they take, there’s a patch of green trying to climb toward the sun.

Jenn cupped her hand around the candles and we cut into the cake, its cardboard base sitting atop a fold out table Tim had packed us. One more joint, Tim says. And we oblige.

K Chiucarello is a writer and editor living in the Catskills. Their work can be found in Pithead Chapel, Longleaf Review, them., Maudlin House, Lammergeier, and others. They are a short fiction editor for Barren Magazine and a flash reader at Fractured Lit. One day they'll drive back to Montana.