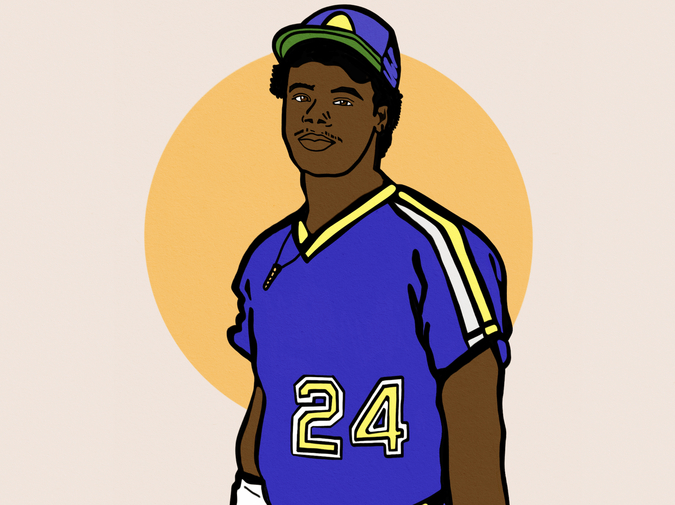 The one and only time I ever met Ken Griffey, Jr. was at a baseball clinic.

I was hitting off a tee when he strolled up behind me. I was 12, and Junior was still in high school, a volunteer, but even then everyone knew he was headed to the Majors. He watched silently as I swung and made contact with a half-dozen balls. Then, he angled himself around to face me in the right-handed batter’s box and asked if I could hit a few toward the shortstop, specifically to the gap between where the shortstop normally plays and the second-base bag. I nodded and tried my best to drive the ball to that very spot.

After I failed to hit the gap 6 or 7 times in a row, I shook my head in frustration.

Griffey, Jr. watched as I went back to my routine, abandoning my efforts to hit the gap he mentioned.

I hadn’t noticed it when he’d first walked up, but he had a bat and almost suddenly he tapped my shoulder and motioned for me to step back from the tee.

“Sure you can,” he belatedly replied, and then proceeded to drive about 20 consecutive balls right into the very space he’d asked me to hit. The balls he hit were rockets that sailed head-high about five or seven feet to the left of second base, consistently. It was as if they ran along some sort of invisible track that extended from my tee to a point about 200 feet from home plate out in left-center field. He stepped away and motioned for me to continue. I swung again and missed the mark. My next ball, though, sailed in a similar trajectory—though not nearly as far—as Junior’s had.

His smile was infectious.

“You just gotta feel it out.”

As he spoke, Junior looked at the spot my ball landed. Maybe, though, he looked beyond it, farther out.

Five years later, Ken Griffey, Jr. was busy establishing himself as one of the best players in the big leagues. My friends and I emulated just about everything he did. We wore our hats backward in the dugout and whipped our bats above our heads like a posse of mad chefs. We brought oversized gloves, straightened up our stances, and pulled our pant legs down to swallow not only our stir-ups but our socks, too.

We were kids who wanted to be The Kid.

But you can’t be anyone but yourself, which makes nearly everything a challenge.

Still, the way Ken Griffey, Jr. played stirred something deep inside me. But I wanted that something to do more than stir. I wanted it to kick and rage.

Unlike Ken Griffey, Jr., I was a contact hitter.

My swing was naturally inside-out. As a left-hander who learned to hit with an aluminum bat against almost exclusively right-handed pitchers, it almost had to be. With most of the pitches hurled my way ending up on the inside third of the plate, I could afford to be slow. In fact, it paid to be slow—contact off of the handle of an aluminum bat was almost a guaranteed base hit.

Wood changed everything. With a wood bat contact off the handle was a broken-bat out. I had to re-learn to hit by unlearning the bad habits of an inside-out swing.

Junior consistently got loads of flat stretch in his arms. He let his rear elbow ride down alligator-style while he somehow managed to keep his back side nearly completely straight all the way up through his core, which generated mammoth amounts of power with minimal resistance.

Ultimately, it was Billy Mesh that taught me to hit with a wood bat. He steered me to a P72 Pro Stock Lite model.

“Skinny handle, medium taper.” He pointed to the bat as he spoke. “Makes it easier to control. And,” he added, “it’s got a massive sweet spot.”

He paused and spit a bunch of sunflower shells.

“What you gotta remember is that hitting effectively is about one thing and one thing only: your hands.”

We were in one of the cages at our practice facility. The rest of the team was long gone. As he spoke, he pulled an L-screen in front of the wooden pitcher’s ramp.

I walked over to the plate and twisted the P72 in my hands. Billy had already taped and tarred it. I stepped up to the plate, got in my stance, and took a few light swings.

“Label up,” Billy barked. “And don’t rush. Nice and easy, into the grain. You just gotta kinda feel it out,” he added.

Back then, most of the things I was told just didn’t take root. They hit and bounced off like seeds on hard soil. But luckily, they didn't blow or wash away. They stayed put until I was ready. The learning somehow came later.

I’ve been thinking about Ken Griffey, Jr. a lot these days, for a number of reasons. Mostly, I wonder if it was his talent that made him so certain of himself or if his certainty made him so talented, if the lack of self-doubt freed him in some tangible manner so that he could operate on a different level and maintain access to heightened faculties that other folks, folks bridled by sensations and instances of uncertainty similar to my own, just couldn’t.

Or maybe he was actually more or less just like me but somehow managed to develop a mechanism for dealing with the uncertainties that swirled around and within him. Maybe he just simply refused to allow them to weigh on or worse, crush him. Maybe Junior was able to play with less pressure, and that’s why he looked so relaxed, so free and easy.

Last Christmas, my son got a wood bat, an ash Louisville Slugger that’s strikingly similar to the bats I used except that his bat is about four inches shorter and a lot lighter with less consideration of the taper and sweet spot. After he opened it, he immediately went out to the garage. I followed him and watched as he swung, absurdly unhitched in his socked feet on the polished concrete floor.

“Label up,” I said almost reflexively. “Label up.”

And in that moment, I felt the weight of my experience suddenly collide with the momentum my eight-year-old son was gathering on his own.

I wondered what it was he’d have to feel out.

Hitting effectively with a wood bat was probably the least of it.

Tommy Vollman is a writer, musician, and painter. For many years, he was a baseball player. He has written a number of things, published a bit, recorded a few records, and toured a lot. Tommy’s work has been nominated for the Pushcart Prize and the “Best of the Net” anthology. His stories and nonfiction have appeared in The Southwest Review, Two Cities Review, The Southeast Review, Palaver, and Per Contra. He has some black-ink tattoos on both of his arms. Tommy really likes A. Moonlight Graham, Kurt Vonnegut, Two Cow Garage, Tillie Olsen, Willy Vlautin, and Albert Camus. He's working on a short story collection and has a new record, Youth or Something Beautiful. He currently teaches English at Milwaukee Area Technical College and prefers to write with pens poached from hotel room cleaning carts.