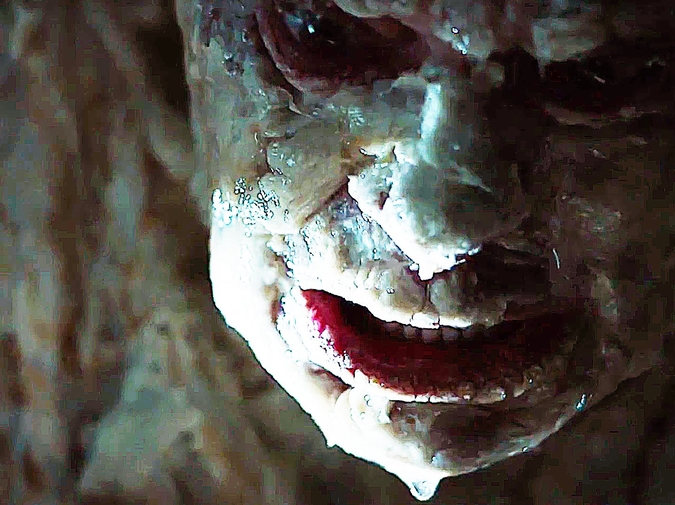 Used to be if I liked a girl a doorbell appeared above her womb only the whole town could trigger. Now I cough so much they’d have to pry apart my bellybutton to castrate me. Lying down causes hiatal spasms. Who knew my esophageal properties had become so acidic as to replace any means of conveyance with the page? A house call recently ended with evisceration from behind. I believe it was character actor Saïd Taghmaoui and he used a bugle with a flashlight scoped on. You can’t really call it swooning if there’s no blood. When taste is abandoned for the gross and zany, we can go one notch beyond cartoon and keep a mannerly distinction, somewhere past Freaked, between Ren and Stimpy and absurdist art. Even a vomitorium could incite a memoir, if an earthquake happened by. Comedians seem to have mistakenly deemed themselves arbiters of quality where the fucked is concerned. The How Did This Get Made podcast just put some half-assed bunny ears on Vampire’s Kiss and I feel about that the way many pretentious citizens and journalist clickbait did about the election. Vampire’s Kiss is a masterpiece of style and performance over relatability, a true palate eradicator. This fear of invisible toxicities invented by pantywaist pot stirrers trying to get laid has continued with a lambasting of Escape from LA. I offer Carpenter’s toilet water in favor of the tone leading to retro action movie masculinity being considered this unintentionally preposterous, this nonchalantly mocked by shrill wiseacres. Yes, mowing down some extras en masse is often worth a giggle at best, but there are still genitals left to salute, all said and dumb. I doubt as many people resent gags in favor of relatability as those who are excessively vocal about their inability to appreciate anything aside from themselves. The yucksters are better adapted to schooling Lindsay Lohan about the abortion she drank her way out of, so chop down that forty-minute autism rap opera that opens the podcast and get back on track. Fucking comedian sneezes and the clouds part. Spotlighting the mediocre became fuck anything unconventional too fast. It’s not satire if you’re enforcing popular opinion to cripple the idiosyncratic. It, like everything of our age, is another competing propaganda. And stop using the word “like” as neurotic punctuation (use “uh” or “ribbit”), Valley Girl. (How about next they hoot against the odd gem A Boy and His Dog, fuck weird movies, right? How about the fun, hyper-stylized Six-String Samurai by the director who got one studio spinoff afterwards and was disappeared from the industry, fuck his strange creative vision, yeah? How and why the fuck would anyone make that singular curiosity? Let’s all point and laugh at the guy who did Hardware, because fuck everything that’s not, like, a hit, I guess.) Same as most love affairs, I am embarrassed and infuriated by how much I require you, but just because your podcast is one of the few conversations I partake in in my exile doesn’t mean I need you to be such proclaimed people. I just need you to be an enticing goddamn voice. Jim Hoskins, same lineage as Tim and Eric, kin to Mr. Oizo, active around their early aughties beginning, employing a similar warping to that zeitgeist while maintaining his own voice, is one of the great short film directors. The difficulty of his genre is how to extend the minimal repetition of an absurdist moment into feature length. He succeeds more in retrospect, as the film becomes another fond growth on my memory. If certain scenes play overly silly, wait out your distaste, dissect your guffaw. He has presented you with every inch of what your interiors once resisted.