The God of the Living Room 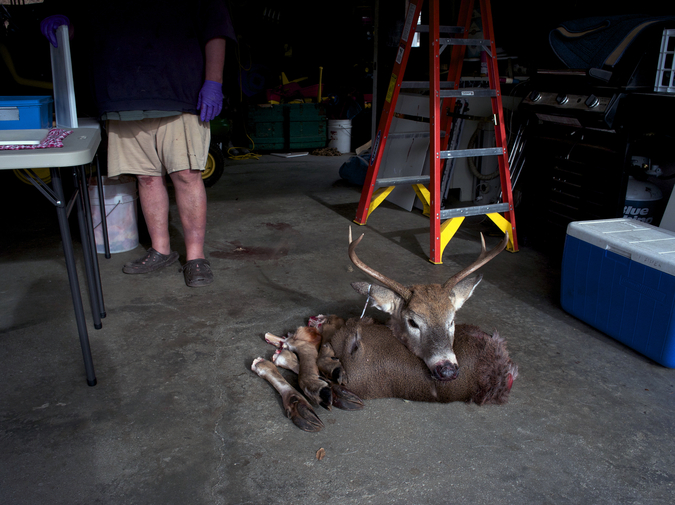 I’m in Tom's apartment staring at the big deer head he has hanging on the wall of his living room. Tom has a small place and the deer head looks enormous. Some kind of giant, mutant deer, like it's god of the living room. It's mounted over the couch so when you sit down to watch TV, the deer is watching TV over your shoulder.

“Where did you get this thing?” I say.

Tom is in the kitchen cooking up some bacon and eggs for dinner for the two of us. He and his wife are separated and I wonder if he eats bacon and eggs every night.

I met Tom at the Twelve Step House. Three months ago I’d showed up drunk as hell and blubbering for help. Really crying. I’m not ashamed of that, of the crying. To tell the truth, the night I washed up on the Twelve Step House’s porch I was homeless. Homeless! I’d drank myself out of my indie barista job downtown, out of my apartment, out of friends’ places. I ended up in a shelter—a human warehouse—on the West Side, getting picked clean by bedbugs every night. It was Tom who poured me some of that awful coffee from the ancient silver urn that sits there in the common room and never seems to be off. He agreed to sponsor me after I kept showing up for the meetings. I was supposed to meet Tom out for coffee tonight actually, but I had an emergency at work and couldn't make it to the coffee shop before it closed. I just got hired on as a route driver for this vending machine company. Some Board of Trade-type got his Snickers bar stuck in a coil and I had to go set it free.

“After you shoot a deer, you have to dress it out. Gut it.” Tom is wiping his hands on a grimy towel that has these little faded flowers printed along the edge.

“You take this special field dressing knife, start at the deer's anus, and cut through his gut. Rip him open right up to his neck.”

“You have to stick your hand in there to hold the carcass down while you slice.”

“There was venison in the house for a year after that little excursion.” Tom points to the deer head with the spatula.

He shows me where the plates and silverware are and tells me to set the table while he finishes cooking up the bacon and eggs. I can't remember the last time I actually set a table, so it kind of amuses me. I get out the juice and find these little juice cups, about a million of them, all stacked neatly way in the back of the cupboard. In a few minutes, Tom has the bacon and eggs on our plates and we sit down.

“Will you bless the food Joey?” he says.

My fork is already hovering above my plate.

Tom starts to talk out loud to God, so I point my head down, but I peek at him. His wrinkly hands are folded, eyes closed tight, bushy eyebrows scrunched together like a couple of wrecked caterpillars. He closes with the Serenity Prayer and I mutter along because I at least know the words to that one now. We amen together.

So I do. I'm hungry. For awhile, Tom and I just sit and eat and don't say anything. When our plates are mostly empty, he wipes his mouth with the back of his hand. He has a white mustache and a scraggly goatee and there are some bits of scrambled egg stuck at the corners of his mouth. I heard somebody say once that alcoholics are perpetually on the path back to civilization, but can’t ever really get there.

I pause with a final pasty wad of food in my mouth. Tom is sitting back in his chair, arms folded now.

I swish some coffee through my teeth and say, “No, Tom. No, I really don’t.”

Tom drums his crooked fingers on the table and stands up. “Done?” He points to my plate. I nod. He whisks both our plates away and I hear them crashland into the sink. I follow him into the little kitchen, but he doesn’t turn around. He starts washing the plates and silverware by hand. No dishwasher.

“I used to pray,” I say, “I used to go to mass. I had this wooden rosary I got at confirmation, but I have no idea where it is now.”

“Dry these dishes, will you?” Tom tosses me a towel, the same grimy, flowery one he was wiping his hands on while he cooked. I make a little game of it, trying to grab the dish, dry it and put it back in the cupboard before Tom can finish washing the next one and set it in the drying rack. Eventually, there are no more dishes.

“You are aware, of course, that recovery involves a Higher Power, as we say?” Tom says, shaking soapy drips from his hands.

“If you don’t pray, my dear boy, how exactly do you plan to communicate with this Higher Power?”

I puff out my cheeks and shrug my shoulders. What a weird question.

“Show me how you prayed,” Tom says.

“How did you pray, the last time you prayed?”

“How should I know,” and I was about to say something else, but Tom interrupts.

“Was it this?” he says, and makes a giant, elaborate sign of the cross on his chest, real big, his hand flopping up and down, and side to side through the motions.

“Yeah, something like that.” I’m standing with my hands in my pockets and I eye the front door.

“Come on, come in here,” he says, and points to the living room, away from the door. I go, hands still in my pockets. “What?” I say.

Tom kneels down in front of the couch. He’s kind of an old guy, so he has to kneel balancing against the couch’s arm, one leg at a time. His joints pop. I hear him grunt a little under his breath and when that first knee clonks on the floor his eyes pop wide, all that loose skin in his cheeks seizing up just for a second. I have no idea what he’s doing.

“Let us pray,” he says, his voice a grimace.

“That’s right. Now, kneel down here beside me.”

I snort a little laugh. “I don’t think God would appreciate that.”

“How do you know what God appreciates?” Tom says, “Will you join me?”

I stare at him for a long time.

He folds his hands in front of him, looks up at the deer. Tom's body compresses a little as he exhales a big breath. Then he gets to his feet.

He disappears into his bedroom and after a few minutes, the skinny, horizontal line of pale light coming from underneath his door turns black.

“Well, then,” I say, “Goodnight to you too.” I head for the front door. I have my hand on the doorknob when I look back at the deer head and say, “Have a good night, deer head.” Its yellow eyes are huge, wide open, giving it a look of surprise—the same look it must have had on its face the instant the bullet ripped through its body, shredding its heart and lungs and liver.

“Tough stuff being a deer, huh?” I say to it. My hand falls off the doorknob.

I was never a hunter, and suddenly I want to touch it. I walk over, step up on the couch and put a hand on its nose. It’s rough like tiny, tiny pebbles, but I imagine it was once cold and wet, like a dog’s nose. I rub the coarse hair on the neck and pinch the knobby antlers between my thumb and forefinger. And I never knew this: deer have eyelashes.

I smile. A twitch of my lips, really.

So now I see that the deer is looking out beyond me, out into the shadows of Tom’s apartment. Then I feel the deer’s gaze. Feel it suddenly looking at me. I suck in a little breath, find myself actually bowing my head, and even though I’m thinking, “What the hell are you doing?” I still do it. I let it look at what I have been as it considers every glass of beer I’ve ever poured down my throat, every bottle of whiskey, knowing even the time I drank the mouthwash at the dentist’s office years ago. I feel the need to make the atmosphere more sacred so I yank the pullcord on the light of the ceiling fan and now, in the dark of Tom’s living room, there is a hazy shiny mellow golden color on the antlers from the streetlight outside. A crown. I kneel.

More sound comes out of me. My lips move but I’m not sure if it’s me talking willfully or if the deer is siphoning words out of my soul, words that describe things I’ve only ever thought but buried, and recollections of my dark sins, the really black ones.

Wishes pour out of me, spilling onto the couch like blood from a bull on an altar. Big wishes for the whole of humanity—world peace and things like that— then, medium wishes—a better job, a wife, kids even, which I’ve never, ever wanted before, and even small wishes I laugh at but still mean—the Cubs in the Series, for example. I wish to hate booze, wish that my stomach would catch fire and burn me to death from the inside out if I ever take another drink. I wish for a better life, for a new me, for a better spirit. Without knowing exactly what that means, I wish for a better spirit. When I get done with all the wishing, I’m exhausted, a kind of exhaustion I’ve never felt before. Like I’ve been vacuumed out or like each piece of my guts has been removed, dunked in a bucket, dried on a line, and stuck back inside me. I can’t think another thought.

The room starts to go dark. Not nighttime darkness, but final-darkness-type-shit, an Armageddon thing. The thought pops into my head, “My god, it’s chosen to end the world,” but I don’t panic. Any fear I have, or even ever had, is absorbed into a blue-colored peace, which is the direction I head when my eyes go closed, when the lights finally go out. But a few minutes later, what seems like a few minutes later at least, I feel a warm, gentle pressure on my shoulder and I pop my eyes open. Sunlight fills the living room. Tom, standing above me, is squeezing my shoulder.