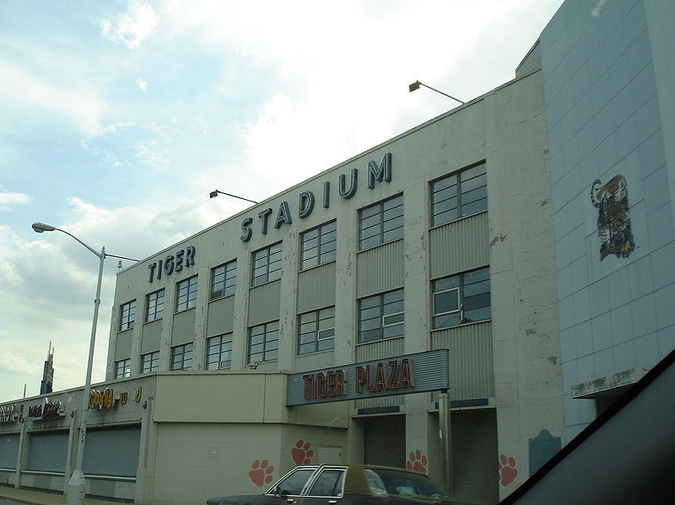 We parked on Michigan Avenue like we always would, walking hand-in-hand through Corktown, the oldest neighborhood in Detroit. We bought peanuts in brown paper bags from vendors on the street. They were more expensive inside the ballpark but I didn’t know that then. “I think these ones taste better,” my dad always said.

It was May 1st, 1988. I was in kindergarten, the Detroit Tigers won 98 games the season before, earned an AL East crown, just four years removed from their most-recent World Series victory.

Our seats were down the left field foul line, where my dad had season tickets that he shared with a group of men and their sons. The vendors shouted back and forth across the massive stadium, from left field to right, a call and response hawking “ice cold Cokes!” for no good reason other than it was almost summer and going to be hot soon and there are eighty-two home games a year and time must be passed somehow.

Tiger Stadium was even then a crumbling masterpiece, all rusted steel and busted concrete, obstructed views from the blue beams that anchored the outfield stands, seats that rose straight up, so you felt close to the action, no matter where you sat.

My dad told me years later that I screamed the whole game, yelling myself hoarse behind this older woman who didn’t seem to mind one bit. Matt Nokes, the Tigers promising young catcher, hit two home runs against the Mariners in a come-from-behind victory but I wasn’t awake for either of them. I guess I cheered so unrelentingly that I knocked myself to sleep. My dad carried me to the car after the game, like he would all those nights of my childhood, when we were out late visiting relatives and we’d pull into my parents’ house in the suburbs, the sound of the garage door jarring me awake in the back seat. “Okay, pal,” my dad would say in his home-grown Michigan accent, “we’re home.”

Other games would leave a mark: missing both of the Cleveland Indians’ DH Jim Thome’s monster home runs because I was searching for all-star ballots; Cecil Fielder’s big blasts that season he hit 51, my aunt Judy visiting from Phoenix, jumping up and down like a little kid because “I just want to see him hit one”; when Ryan Higgins’ step-father made us leave early but then we got boxed in on all sides in the parking lot and had to listen to Mickey Tettleton’s walk-off, extra-inning shot on the radio while sitting directly outside the stadium.

That first game was before I became the kind of person who remembered all of this, before I collected stacks of baseball cards, before I grew to admire and abhor other franchises, before I realized I loved a game of failure that was destined to break my heart, before I catalogued seasons and players and stats in my brain, filing them away for later, when I will meet others like me, baseball obsessives who romanticize the game beyond all reason, sons and daughters, nieces and nephew, who tell stories of their own games, with fathers and mothers and uncles and aunts and friends, which we collect so we can share, like so many other myths of American life.

It will be a decade, maybe longer, before I realize that continuing to love this game means accepting the sport’s tangled history of racism and classism, accepting the wrestling match of corporate greed versus individual greed, accepting an ungodly long regular season followed by a getting-longer-every-year post-season, where the games bookending the year are played by men dressed in winter clothing and paid too much money.

Of course I don’t remember the exact day and opponent and box score of that first game. I was six years old, how could I? But I knew Matt Nokes hit two home runs and my dad insisted the game was in early May. A quick search on Baseball Reference finds that Nokes only once hit two homers as a Tiger in early May and that was on May 1st, 1988, a 3-2 victory against the Seattle Mariners. I like being able to pinpoint this. If everything else is memory--where we parked, the peanuts, that it was just the two of us, the crumbling of that masterful stadium--the game is fixed, recorded and set down for all time, exactly .012% of the games the Tigers played at home that season, the season itself just .011% of all years played at Tiger Stadium. A blip. Another day at the ballpark. But if the box score didn’t exist, it would be like it never happened and we need validation. See, we get to say, we were there. We remember.

These days Tiger Stadium is just a field on the corner of Michigan and Trumbull. It was demolished and sold for scraps almost five years ago. Despite the steel gates that continue to fortress the area, it’s difficult to recall this ground as the hallowed place where the Tigers won four World Series, the last thirty years ago, off a Kirk Gibson bomb in the clinching game; where Cecil knocked his 49th (but not his 50th) that fabled season; where my beloved team finished the second millennium as the worst franchise in baseball. It looks so small now, that patch of land, as if I could get a group of boys together and shag fly balls in the fading afternoon sun. As if I can still hit a baseball. Or know any boys anymore.

Nicholas Ward's writing has appeared in or is forthcoming from Hypertext Magazine, the Eunoia Review, and the 2nd Story podcast, where he has been a company member since 2006. He lives in Chicago, with Amadeus the cat.