The Eyes of the Storm 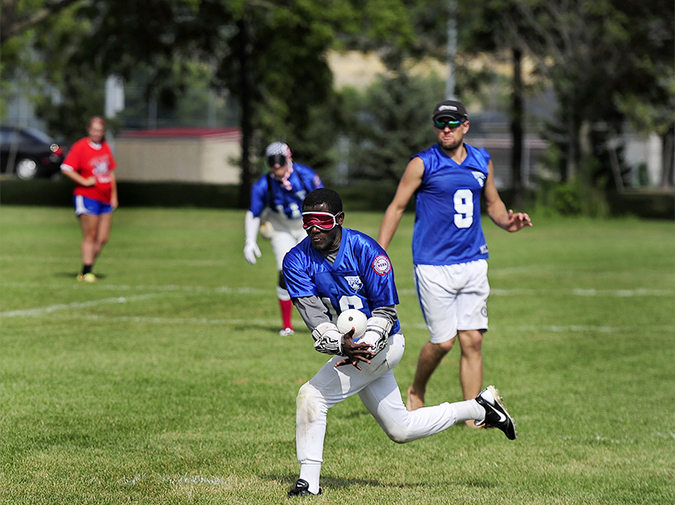 After the ball scooted past him at third base, Ethan Johnston of the Colorado Storm slammed the dirt six times with his fist. By four, five, and six, he’d slowed down, as if anger was gas and he was past empty. Though he was one of the best players at the 2014 Beep Baseball World Series—with a .535 batting average and more than a third of his team’s putouts—Ethan had been baffled by baseball when he arrived in America in the late ‘90s.

“I thought it was boring,” he told me, “partly because I'd just learned English. But learning the language and the terminology and how the game is played was the big change.”

For Ethan, and for the 400 blind and visually-impaired members of the National Beep Baseball Association, baseball is language and sound. They have to listen for the beep of a 16-inch modified softball and pounce on it to record outs. At the plate, they count on spoken cues given by their own team’s pitcher and they swing for contact. When they hit the ball and the fielders scurry to defend, it’s madness.

From the plate, Ethan will fly blind toward a 48-inch buzzing base 100 feet away and the ballplayers in the field—everyone wears a blindfold to eliminate remnants of sight—will shuffle and dive and yell the perceived location of the ball.

Ethan tackles the base before the fielders grab the beep baseball: he scores: he leaps. Out of the 19 teams at the 2014 World Series tournament, Colorado’s just made the final four.

For Ethan, though, there’s no impossibly green infield, no red seams slicing toward the strike zone. There aren’t even any easily executed high-fives. After 13 eye operations, baseball is all imagination for him, all crack of the bat. He grabs for his cane, for his teammates, and they organize a celebration.

Ethan thinks the St. Louis Cardinals won the first time he went to Busch Stadium and soon enough radio play-by-play man, Mike Shannon, became his company. That made a difference, and like many of us growing up on a scratchy AM version of baseball, he closed his eyes and wished for a rally.

“Us Missourians are very diehard Cardinals fans,” he said.

Born Esubalew Truneh in a remote village in Ethiopia, Ethan grew up poor during that country’s civil war. When he was still a little boy, his mother left him in the care of two men—“typical skinny-ass Ethiopians,” Ethan described them—who promised to take him to a school in Addis Ababa. Instead, on the way there, they held him down and attacked him with sticks and a chemical, conniving to blind him so he’d be a more pitiable beggar for their crime ring. They succeeded. Ethan went with them to the city.

Instructed to hold onto the back rail of open-air buses until the riders tossed him a few coins, Ethan would hear the money pinging into the gutter. Sometimes he’d be dragged. One day, though, after two years of this life, Ethan encountered a couple in a café who ran a blind school.

“My guide took me in and this couple—the wife could see, the husband was blind—they heard me begging. The wife saw me and gave me ten cents.”

The two tried to arrange for Ethan and his criminal handlers to come to their school, but his handlers were suspicious and forbade further contact. Coincidentally, Ethan ran into the teachers again on a bus. They helped him get off and his handlers followed. The couple tried to deal, offering to adopt Ethan.

“That's when my guides said they weren't going to let that happen,” Ethan told me. An argument erupted and the couple called in their school’s guards, who flashed guns. The handlers ran. For Ethan, mercifully, there wasn’t going to be any more chasing after the sound of coins. But he’d mostly forgotten his life before the blinding, so instead of going home to his mother, he was relocated through the work of adoption advocates to the town of Ashland, in central Missouri. His adoptive parents eventually had 21 children. He was their 11th.

“At that time,” he said, “I thought America was a small town in Ethiopia that I'd never heard of.”

But Ethan found sports, found a new home in ESPN. He took to calling himself the family’s 11th draft pick and he loved basketball, especially Shaq and Kobe. His family loved the Cardinals, and though it took awhile, his new national pastime grew on him. He liked the sound of it.

When I played cards with Ethan and the Storm in their hotel at the 2014 World Series—Braille cards, the game was “Pitch”—I tried to find out what sports had done for Ethan. I expected this traumatized figure to be constantly reconciling his physical losses with his love of the game. I expected him to teach me something beautiful about baseball, suffering, and the interplay of the two. Instead, we ate cheese cubes and felt for the bumps on the King of Diamonds. He told me my cards were showing and gullible-old-me hurried to cover them up. Much laughter.

I started to tell him I was surprised he could be an everyday-guy, chatting about the Rockies and about his regular route on the D line in Denver to the downtown Chipotle. (His order is corn salsa, extra cheese, emphatically no beans.)

Shouldn’t he be some kind of baseball sage?

But his history doesn’t affect everything, and that was the mistake I’d made about blind baseball in general as I followed the game and tried to write about it. The players don’t have secret wisdom just because of their blindness, and it's much more interesting that way. They’re competitive, they’re salty, they’ll kick you in the teeth for a win, so, please, save the violin music for another day, they say. Nothing inspirational to see here. Move along.

Meanwhile, instead of being a Yoda-like caricature spewing maxims about perseverance, Ethan is a charming patroller of the hot corner who talks like he’s had a media-preparedness lesson from Crash Davis of Bull Durham. “You’re going to have to learn your clichés,” Kevin Costner’s Crash tells Tim Robbins’s Meat LaLoosh, the rookie pitcher, and Ethan’s learned his. He talks about giving “110 percent,” believes that you can’t worry about the past, and thinks “things happen for a reason.” Coming from him, the platitude seems to mean more. So even though his injury doesn’t always insert itself into the conversation, his baseball patter does. It’s a repeated prayer, his gratitude for a new life and for the invisible game.

A few years ago, Esubalew “Ethan Johnston” Truneh listened to the MLB World Series from his apartment in Colorado. He’d moved there from Missouri for an education program and met a guy named “TwoLegs” Morrow who took him to a Colorado Storm practice. When Ethan came home with bruised hips, he knew the sport was rough enough for him. He could play this game he’d heard for so long.

On the radio, David Freese came to the plate in Game 6 representing the St. Louis Cardinals’ last chance. Down in the count, 1-2, Freese took a 98-mph fastball deep to right for a two-run, game-tying triple. In the 11th, he homered to win the game and the Cardinals, Ethan's Cardinals, came back to take the series in seven. Ethan screamed and jumped around his apartment, and he’s since memorized Mike Shannon’s radio call.

“Get up, baby, get up. David Freese has done it again!” he says.

“No one gave us a shot,” Ethan told me. “But that's the thing about baseball. You never know what's going to happen until the last strike, the last out.”

The Colorado Storm failed to make the final of the World Series in 2014, losing on the second-to-last day to a team called the Rehab Hospital of Indiana X-Treme; but Ethan has started spring training and will compete in Rochester, New York, this year, seeking his first championship. He wants that ring. And it could happen. If third-ranked Colorado gets all the bounces, and if Ethan can slam the ground with his fist, put that anger behind him—four, five, six—and get up to chase the elusive sound of the beeping ball again.

He’s perched at third, waiting. He turns his ear to the plate.

David Wanczyk grew up with the Red Sox in Western Massachusetts and once gave up 27 runs in an inning before realizing he’d never make it to Fenway, or varsity. He’s made up for that by writing on Beep Baseball for theclassical.org, the Boston Globe Magazine, and Texas Monthly. (A book is in the works, too, as are relevant and irrelevant tweets—@DavidWanczyk.) He lives in Athens, Ohio, with his wife Megan (CF), their daughter Natalie (LHP), and the family heirloom—an autographed Pedro Martinez hat.