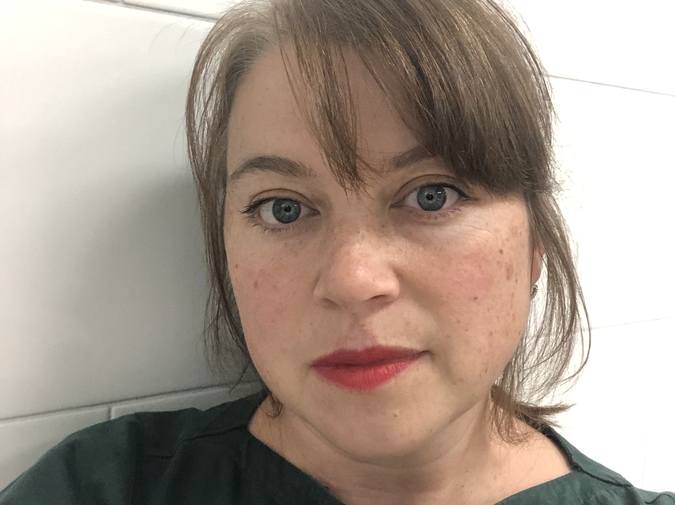 We beat Brock Shamos every day. We beat him with jump ropes we stole from Mr. Randall’s P.E. class, hidden in Allison’s backpack and replaced in the plastic milk crate the next day. We beat him with a steady rhythm, our little arms pulling back and springing forth as if leading a blind team of horses through the furious wilderness of a run-down elementary school playground.

The teachers never seemed to notice our activities under the pine, and if they heard us, it was only our surprisingly upbeat renditions of a New Kids on the Block song, “Hangin’ Tough.” Brock did not sing, of course, but instead stood silently gripping the tree, steadying for a barrage of white and blue beads to crash down upon his back, handles held by two insane, crooning bullies.

The ritual was simple. We would hit him until I saw the first few lines of wetness dance down Brock’s cheeks. The noise of the plastic beads hitting his heaving back often caused me goosebumps, a memory that stays with me decades later. The sickening slapping. The silence. But I could not, and did not stop, and he did not utter a sound.

Brock merely looked in my direction with a wise solemnity until I begged off Allison. “He’s had enough,” I said. “He’s in ‘The Club’ for sure now.”

Allison would let go of the handles of the jump rope and we’d watch it fall into the dirt and matted grass beneath us. Brock would retrieve the jump rope, coil it, and place it into Allison’s backpack. We all knew what roles we played, and we executed them with a perfect precision.

“Being in The Club,” as we called this particular activity, consisted of the three of us and started within the first few weeks of school. We continued the routine day in, day out, and avoided the typical playground escapes such as soccer and tag, opting to instead beat the Hell out of Brock with a cheap jump rope. Stoic perhaps, or just accustomed to these sadist experiences, Brock didn’t protest. Not even once.

Even on days that we weren’t allowed to play outside due to paltry Oklahoma rains or Ms. “Fatty-fat” White’s ongoing gout condition, we were isolated together. Brock would sit in corner of the cafeteria and hug his knees and pretend to sleep and Allison and I would run over to him and mercilessly tickle him. Other times, I would pinch his folded, protesting arms until Brock could contain himself no longer and screamed out, summoning the attention of gouty old White, who constantly threatened to call our mothers.

Once, I kissed his quaking forehead during Allison’s tickle attack and Brock, ever-the-victim, became silent and looked at me with a scowl. “What?,” I replied. “I was going to bite you instead, but didn’t want to get in trouble from Missus fatty-fat.”

Allison and I grew bored after several months of abuse because it honestly seemed that Brock was too easy of a target. He never fought back, never looked us straight into the eyes, never said no, all of the things I learned in my college women’s studies course to be “oppositional tactics” when fighting off would-be rapists. I was in love with Brock’s jagged dirty-blonde hair, a mom special. I loved the way a single toe-headed strand would fall forward when he laughed in music class. The delicate hairs highlighted his beautiful, effeminate cheekbones. I wanted to hold him in my arms until he learned to love me too. But mostly, I was sure that more than anyone else in the world, Brock merely knew what took me years of therapy to understand.

Approximately one year earlier, I had been to Brock’s house to play with his stepsister Gennifer after Girl Scouts. My mother dropped us off in front of her house and hurried home to get dinner started before my stepfather would return from the tire plant.

It was then that I saw Brock for the first time, and I saw his father. The silent glare, the broken down car in the driveway matched by a variety of filled ashtrays littering the interior of the house. There I saw the jagged wood opening where a knob was missing from Gennifer’s bedroom door, askew pictures adorning the cramped hallway, and the strange, rugged holes in the wall. The familiarity of looking through someone else’s snapshots and realize you were the photographer all along. Your story, amplified into images.

Not yet eight and already immune to her environment, Gennifer proceeded to direct me into her room and handed me a naked doll with semi-matted, strawberry-blonde hair. She held the Midge doll up with a reverence that I usually reserved for birthday cake or my own can of Easy Cheese, a holiday tradition in my house.

“Midge is dirty, but she’s the best because she isn’t married,” she explained. I feigned interest in her invented story of a “Sexy Thang,” (Midge) and her “boyfriend” (Ken) who liked to take her for walks and numerous trips to Wal-Mart for cigarettes. We moved Midge’s legs back and forth on her bed, and even had her carry Ken by balancing his naked torso in her forever outstretched, plastic arms.

“He’s had a bad day,” I said. “He’s probably drunk and needs some help to get around.” Gennifer agreed, and gingerly laid him down on the pillow. “He needs to rest, or he’s gonna whoop some ass!” she said, flashing a crooked smile and displaying an angular, erupting new front tooth. I smiled back and meant it. “Finally,” I thought, “weirdo Gennifer seems so completely normal.”

Suddenly, my stomach twinged with hunger. It was nearing dinner time and I prayed it wouldn’t include another night of deer stew. “Delicious, delicious meat that we got ourselves,” my mother would say as she stirred the simmering pot of tomato sauce, gelatinous vegetables and game.

After one last pretend trip to “get smokes for my baby,” I handed Midge back to Gennifer and left her house, waving once to beautiful Brock. He didn’t look up in my direction, but kept his eyes peeled on his father’s face as he watched the news. He seemed quiet, shrunken, and distantly younger than he really was.

I never played with Gennifer again. I began to ignore her at Girl Scouts too, and began sitting and socializing with a set of overweight black twins. They were loud, and fun, and more importantly, didn’t want to come over to play. Simply put, I felt too weird over at Gennifer’s house. I knew from days and nights of experience that it was just a matter of time before someone was going to yell. Someone was going to cry. Someone was going to need to hide.

Though Brock had promised to come over to my place during the first few months of school, he never reached my front door. The borderlands between my home and his stretched beyond the three blocks between us. I asked him about it one day at school, but he didn’t respond. That afternoon on the bus ride home from school, Brock sat next to me and started to talk quickly, nervously.

“I wanted to come in, but you know, I didn’t want to get in trouble,” he said. “Does that car, um, run, or does your dad have to fix it a lot too?,” He asked, referring to the ever-presently-broken Ford littering our yard.

I felt my stomach begin to clinch and my shame, a distinct combination of nausea and terror, emanating upwards, radiating my entire torso in a searing redness. I looked down to the floor of the bus and watched my dirty plastic thermos roll back and forth between my shabby canvas shoes, and I knew. I knew even if I never touched Brock Shamos again, we’d share a membership in the club, now and forever.

Melissa Wabnitz Pumayugra is a writer based out of central Texas who enjoys a great tall tale and an iced black coffee. Her work centers around identity, religion, cultural phenomena, and embracing one’s past. Her photography and writing can be found in Sybil Journal, Oklahoma Today, Red Door Magazine, Vox Poetica and in many obscure publications scattered throughout the globe.