The Bottom of the Order: Overrunning It 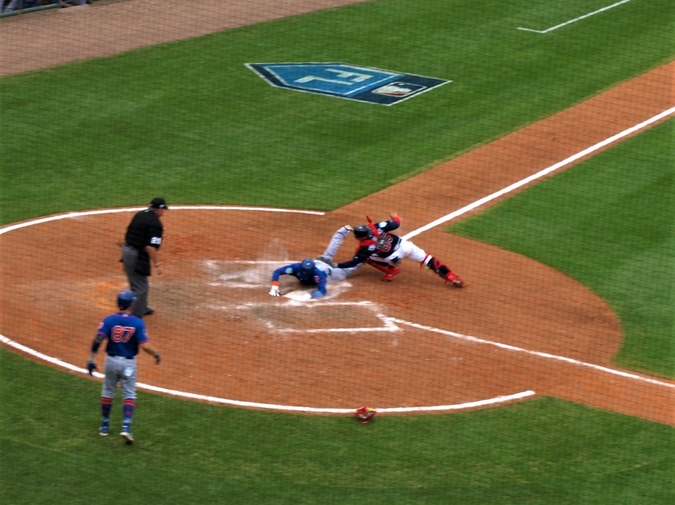 Late February on the Space Coast is a good time and place to duck out of the cold weather back home for a while and soak in a bit of sunshine along with the deep Floridian weirdness. Take the kids to see the rockets at Kennedy, sit in a low chair on a brown sugar beach and get gradually day-sozzled on Guatemalan beer, duck into Moe's Lounge in New Smyrna Beach to drink $2 Lites and watch televised golf with the local retirees. Then maybe head over to the State Park near Orange City to rent a canoe and paddle gator-infested waters, strafed by black vultures and large, fictional-looking birds, for the chance to see some manatees, large and stationary in the gentle current of a warm, clear river.

When that fun's all used up, though, you might as well make the drive into the greater Orlando metropolitan region to take in a Spring Training game.

I recently did just that, with my wife and our three kids, on a day which threatened to dump rain onto the vast paved expanses and prehistoric vegetal tangle of Lake Buena Vista, including Champion Stadium, site of the game between the Mets and the Atlantas. The afternoon was mellow in all the right ways, and things broke in our favor: the parking was free, the rain held off, the saxophone quartet absolutely nailed “Take Me Out to the Ballgame,” and a kindly usher handed one of my boys a retrieved foul ball on our way out.

In the ninth inning a rail-thin infielder none of us have ever heard of stepped up for New York, down two runs, and he stung a line drive up the middle. The likewise nameless player occupying center for Atlanta raced in toward second, and you could tell he was thinking, “This is my chance! Here's where I do something amazing and make the brass take notice!” Only he'd broken too early, and he realized this too late, and the ball sailed over his head, though he stretched out and leapt skyward to try and spear it. By this time the runner was cruising toward second, and the center fielder knew he'd blown it, that all he could do was watch the ball skitter all the way to the wall and hope his right fielder could get to it and heave it back to the infield in time to limit the damage to a triple.

The throw reached the catcher a split second after the runner slid in, head first, dust flying, safe as Fort Knox. An inside-the-park homer.

I was cheering for the Mets, both because of old grievances, and because you can't cheer for a team whose name you refuse to say. And I was genuinely thrilled that I got to see an inside-the-parker for what I think was the first time in my life. I've been to a lot of ballgames, in a lot of places, but in scanning the memory banks, I can't come up with a single incidence of having witnessed one in person. It's among the rarest of plays in baseball, after all.

As the likelihood of it grew, I kept checking the progress of the runner against the location of the ball. When the runner rounded third, I placed my hands on my head in an unconscious gesture of disbelief. And how often in life do you actually experience such a feeling? Like, I cannot believe what I'm seeing? I have to think that's pretty rare.

I was also just plain overjoyed that my kids got to witness it, for all the reasons I just listed. I've got a twelve year-old and a pair of 9 year-olds, which means I'm in the position of counting down until the day they won't be so open to the experiences I expectantly and hopefully place in front of them. My reign as curator of their worlds is winding down. As it is, where baseball is concerned, they all remain pretty soft targets, but a large part of me senses that the clock's ticking on that, especially when it comes to the nearly-teenaged girl.

So if I was maybe overly-excited for a sloppy play in a Spring Training game, my excitement was genuine. And yet for all my excitement I felt the greatest sense of connection with that center fielder, walking out to his position with his back to the plate even while the ump signalled 'safe,' recognizing that he'd fucked up, and trying hard to figure out how he was going to erase that boner in the minds of the coaches, in the little bit of time he had left before he was shipped down to the Gwinnett Stripers, or back to the AA squad in Rome, Mississippi, to fart away another season, far from the first class trains and the brass spittoons of Major League Baseball.

Every writer's got to hone an angle, the thing that's theirs, unmistakably. Or to put it another way, and to steal from Richard Ford, to find and write about that thing which causes “a commotion in the heart,” and I have just betrayed mine. I cheer for the runner rounding third and chugging into home, but I identify with the guy who overran the ball.

Because I've overrun a few balls. I've taken my shot only to realize that my aim is off, that my gut instincts have led me astray. I've felt that pang of sudden terror while recognizing that the ball is about to sail over my head and that there's not a damn thing I can do but try to minimize the damage. This is metaphorical, you understand. The instances in question have tended to have to do with books, and writing; the stuff I broadly identify as “the work.” I've brazenly introduced myself to heroes, misquoting their words in the process, sent awkward and fawning emails to people whose work I've admired. I've made too-confident pitches. I've read truly shitty pieces in public.

After the terror has passed, and the regret has lost its initial sting, I've been glad I did. Overrunning, I think, is a way to see where you stand, to measure yourself against your own expectations, and those of the world. The trial-and-error of self-definition. It can be embarrassing, and chastening, and damaging to the ego in the short term, but ultimately I think it contributes to the development of the sort of knotty, fibrous hide required to survive the act of putting yourself out there.

Our fuckups help us to grow, is what I'm saying, and I'm going to steer into that; that's what this semi-regular thing – which we have called The Bottom of the Order in reference to those light-hitting members of the team of whom less is expected, and who are therefore buried in the batting order in the seventh, or eighth, or ninth spots – is going to be. I'm going to stare hard at the moments that collapse the distance between the rarefied ballplayer and the rest of us; the human moments, and acts, and desires. Bryce Harper is great, Manny Machado is fine. I really believe that Mike Trout is among the greatest ever to play the game; Mickey Mantle if the Mick had never wrecked his knees or seen a bottle. Ichiro Suzuki is my all-time guy, followed by Ken Griffey, Jr., even though neither one of them ever played for the Blue Jays, my lifelong team, which only demonstrates the complexity of these matters of the heart. But I'm really interested in the player at the next locker, or the one who was drafted one spot later, or who was on track to be great but made a bad choice somewhere along the line, was dealt a bad hand, got knocked or nudged or pulled off course. And I want to look at the oddballs, too, the strange fits, the ballplayers who don't look like ballplayers, the square pegs, because I have great affection for them, and believe they too have a lot to say about who we are and why we watch baseball as much (or as little) as we do.

The failures are more interesting because without a thousand of those, that slim moment of victory wouldn't mean a damn thing. And I'm hoping that you – whether you're a diehard ball fan, or a person who has no interest in sports whatsoever – feel a kinship with those athletes, that you feel your routine struggles and concerns are reflected through the dignity of their labor, as they toil on fields and TV screens for six months at a stretch, day in and day out, to perfect a notoriously difficult game.

His name was Isranel Wilson, by the way. The center fielder. He goes by Izzy. He's a twenty-one year old from Sint Maarten, signed by Atlanta in 2015. He's bounced around in the low minors since then – the Gulf Coast League, the Appalachian League – and his role here is to stand in for all of us, because in his miscalculation of the ball's trajectory and his hasty decision to sprint toward the infield, he transcended his position as a late-inning substitution in the most meaningless of all baseball games, and became an emblem. He's me, he's you, on what we hope are our best days, charging in, oversure and underprepared, damn the torpedoes, putting all the likely consequences out of our minds for a moment, taking our best shots, even if history tells us that some measure of caution is in order. Suspecting it might be the last shot we get, we're gonna charge forward, even as we come to fear in the very next heartbeat that this will prove to be something from which we will be forced to learn.

Andrew Forbes is the author of the story collections Lands and Forests (Invisible Publishing, 2019) and What You Need (2015), which was shortlisted for the Danuta Gleed Literary Award, and named a finalist for the Trillium Book Prize. He is also the author of The Utility of Boredom: Baseball Essays (2016). Forbes lives in Peterborough, Ontario.