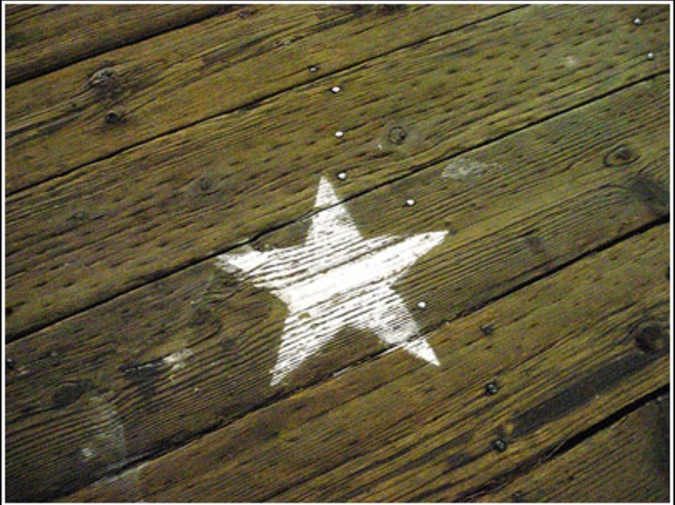 And the earth died screaming
While I lay dreaming
--Tom Waits

He came from Wal-Mart. Some fellow was loitering by the automatic doors with a stink my wife described as rotten apples and urine. His eyes, she said, reminded her of the hamster we'd bought our son because the goldfish died the night he scooped it out of a plastic pool at the carnival. The kid in tears, my wife wondering if everybody knew they couldn't swim in regular water.

She got her degree in social work with a focus in chemical dependency, and she's a bleeding heart. I really don't know if he was on drugs. In any case, she had only 30 minutes for lunch, and his dilated pupils got her thinking about Floyd, in his plastic ball, and our son Daniel: all sad-eyed, getting scolded for rolling the hamster around the living room. He always got a sincere kick out of that.

So she took the plant. Never dreaming she'd walk in on her husband, covered in potting soil.

Dirt falling off his naked body.

After cyber-sex, I wanted to rewrite the Bible and have it translated into Korean, for her. She was fanatical, and I was fortunate to have been laid off. I could whittle the day away listening: how she was going to donate her eggs to Dr. Hwang Woo-suk, or how she last experienced infinity through sensual meditation and had gotten her cherry popped by a member of the movement. I believe she was 23.

She made me feel like God on Day 0. I know that's hokey. In any case, that was the reason I signed up for the creative writing class. I was going to give her my Ulysses or fill-in-the-blank doorstop classic. I was going to woo her with my words.

Yu-jin, however, wasn't as supportive as I'd imagined: "Why would you try to improve what our prophet already told us?"

"Raël just reinterpreted the Bible," I said. "He barely touched the New Testament."

The Hebrew word 'Elohim,' Yu-jin said, has been mistranslated as 'God,' since it includes the plural suffix -IM. 'Beings from the sky who will return in 2035' is a more accurate translation, she says. I didn't ask about the royal 'we.'

I love my wife. She's peculiar -- she didn't speak to her father until she was five, or anybody else besides her mother -- and she has a phenomenal memory. I used to sit on the couch and watch her flip through the pages, putting to memory the names of bones and muscles, Latin declination tables, bibliographies, and whatnot. I couldn't help but love her.

I'd watch her for hours, hair up, pen in mouth, reading the newspaper, doing her Sudoku. She was always supportive. It's embarrassing.

I'd fix Daniel's lunches and pick him up from preschool, browse the job listings. And Marci would kiss me when she came home. I thought about that when she picked the plant up off the look-alike mahogany from the Philippines.

"Daniel," she said. I am also Daniel.

Then she walked out of the office, opened the sliding glass door, and threw the ficus off the balcony and onto the asphalt. The pot breaking into pieces, her going inside to find something else.

Yu-jin had asked me, that same day, what I'd do if I went to where the Elohim lived and the constructs of my enculturation didn't apply. In so many words. "Me. I'd fuck a tiger," she said. Her facial expression was out of sink with her words because of the slow Internet connection. Her hair parted down the middle, over the front of each shoulder, so that her areolae peaked out between strands of hair.

Yu-jin covered her mouth and laughed.

"Then that's what you should do now," she said.

I wasn't expecting her before six o'clock. She never gets home before then. So I went to the kitchen for a glass of water (in order to water the plant), and Marci walked in shortly thereafter. They were removing asbestos from the center.

"It's not about the plant," she said. "It's not about that at all." And she gave the neighbors something to talk about, then went to her mother's. And I went to clean up the carport. I didn't bother with the potting soil or the lawn chairs. I just put the ficus in a cardboard box with the smaller household items. The rest was left outside. And I called her mother, Reba, and waited, and three days later, she came back to the apartment and saw him in the office amongst my stacks of papers.

Marci, however, wasn't angry. She just put her finger over my mouth and wiggled out of her underwear. "It's not about that at all," she said. Then she brushed her body against his shiny leaves.

Richard D. Treat lives in Seoul, South Korea, where he teaches English at Korea University. His short stories have also appeared in Flashquake, Verbsap, and elsewhere.