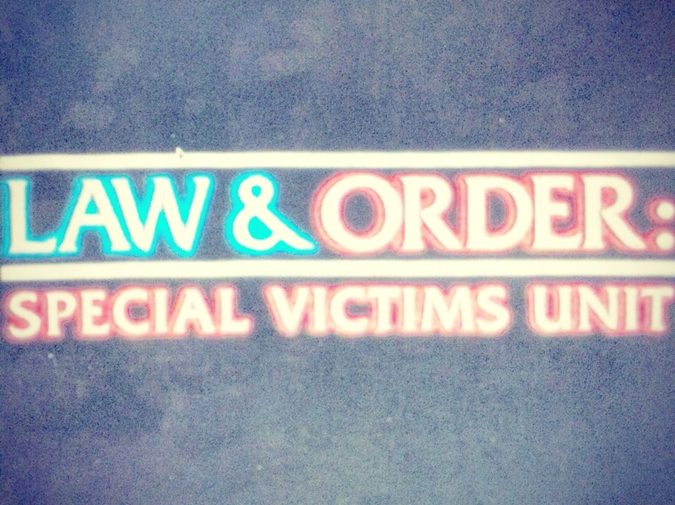 I imagine Temperance Brennan's annual
gynecological     exam
might go something like mine:
If you're not finding time to eat, you must not be having a lot of...
Are you seeing anyone right now?

See him, knew him. Women have a lot
to keep     their eyes on lately.

In the lab, empty body on the lighted table,
Temperance spots a mark on a bone
that leads to a killer. That hunk, Seeley Booth, surprises her
later in her office—Oh, what's this? she asks.
He replies, What does it look like?

She can hardly look away from him. An egg,
she answers.

And when was the last time you recently talked about an egg?
Booth asked,     suit jacket open.
He might as well have asked, as he seems to,
often, How could we drink up the sea?
She considers

a man, the one she kissed last night. She
looks as if she's swallowed a fly.

I'm distracted, tizzied, by Seeley, fingers
spread     on her desk. I'm picturing the leather
strap across his back that runs
to hold his standard issue glock between his
not-so-standard arm and chest, a place

she’s slipped (I’d like to slip)
her hand. Hand along the lining of his jacket.

At the diner, Temperance says something to remind
Seeley of her round-house kick.
He's honoring her with his broad shoulders,
shoulders     of giants,
goddamn, goddamn, under his suit.


Gretchen is cutting Claire's hand
and Claire
is leaving her blood everywhere.

I thought Claire would cut her own
hand. I thought these teenage girls liked
how the cuts did not
heal. Quickly.

I know how girls, in private, bare
an upper arm, a shining thigh.

After a leave of absence, a girl returned
to my school in the middle
of the year, feeling better. She wore
tank tops again
and her arms,
near her shoulders, were covered in scars,
thin and overlapping, almost like birds.

A nine-year-old boy knows about cutting,
showed me
in an improv game
how it jumps to mind. I couldn't tell if
the other children understood.

I, maybe as a teacher, think, Gretchen
has cut someone,
oh my god.
But it's not hard to see what's going on here.

Claire, once full of her secret, and fearing
the shape of a lonely woman, moved
to fill the bed
beside her
in her dorm, her room away from home.
This cut to keep a woman.

Gretchen, more grown up than I thought,
accepted the bed
how all women do,
this will be better than what
I have already.

I think she might ask to cut Claire again.


Charlie wants to kill Olivia after
he finds out what she knows.
All she has is her gun; Charlie has
women to threaten: her sister, her
niece. And while Olivia often needs
Peter to save her, a man outside
the law and good with his fists,
Charlie can keep him at bay.
Charlie’s not distracted by Olivia’s
breasts and blonde hair. He could
kill her in her sleep if he did not want
what she forgets she knows.
No wonder
men are mutating, putting their hands
through walls, spitting out colorful
creatures. The world can hardly
contain itself, so enamored with
Olivia, how she might pass through
its dimensions like a pressing
tongue. The world is just ready
to collapse! Breathless. And men like
Charlie know it, feel it, are trained
to deal with it, push the world
one way and not the other.
Thank god
the past repeats itself for the good doctor,
Walter, Peter's father. Like a father
for Olivia, almost. Walter has seen all
these miracles of science before, knows
where to start his research, knows
when to get Olivia involved, get her
into the tank like a woman who needs
a new body. The doctor can do what
he wants because lovely Olivia wants
the truth and the doctor, paired
with her body, is like
the shortest
distance between two points. And
someone needs to catch Charlie.
Olivia is going to want to shoot him
dead with every bullet in her gun.
She will tighten her neck for
a second and touch that soft hair
of hers. She will drive that big, black
SUV of hers. That protective look
from Peter is one to envy. Even
that longing from Charlie, even
his sweat, how he talks about her
when she’s not around.


When Cameron went blonde, I thought
of the sun. She sleeps on a bed five shades of goldenrod.
House, Foreman, and Chase are her Papa Bears. And if
anyone's porridge is too hot it's Chase's, soft-jawed
Australian, surgeon, her husband.

Cameron probably thinks about how Chase
is a funny name for someone who didn't need much
convincing. Cameron probably would like
to know what I know, how she looks
waking up alone in that giant bed, sun all over her.

There was a man who discovered the sun had a lifespan
and if he were ever able to stop thinking
that new thought, that first-time-ever-thought-by-mankind
thought, well he might stop thinking it
at the sight of Cameron's arm crossing the bed.


At home, I watched Eliot Stabler
lose his son for a few hours.

to help Stabler find him, boy whose
credit card was stolen, whose car

was abandoned in a bad part of
New York City. A mother started

grieving early. A community ready
to mourn together, lamenting like

a rising bread, or turning milk.
It has almost been a year since

two fire trucks crashed a hundred
feet from me, since I was hit by

a piece of metal, perfectly round,
that flew from the center

of the intersection, accident, and
my mother was taking time

to thank God it wasn't worse.
Could anyone resent us for our good

fortune, for my black and blue leg?
Stabler, so familiar with his city,

of the highways that enter
the city like poured wine.

Other anniversaries approach me,
my siblings, my parents. Two years

since the loss of my grandfather, two
since the doctors cut my mother's

tumor from her brain and we
taught her how to walk again.

Stabler sees families band together,
but maybe doesn’t see us how

I do, along some mountainside
grazing on what the mountain

grows for us, the mountain we
keep naming, loss, grief, torment,

breast, big howl, dragon tooth.
Whatever it can grow, anything

Sarah Blake lives outside of Philadelphia with her husband and son. She is the author of Mr. West, an unauthorized lyric biography of Kanye West, forthcoming from Wesleyan University Press in February 2015. Her poems have appeared in Boston Review, The Los Angeles Review of Books, The Awl, and elsewhere. She was awarded an NEA fellowship for poetry in 2013, and she’s Assistant Editor at Saturnalia Books and co-founder of Submittrs. More of her TV poems can be found in FreezeRay.