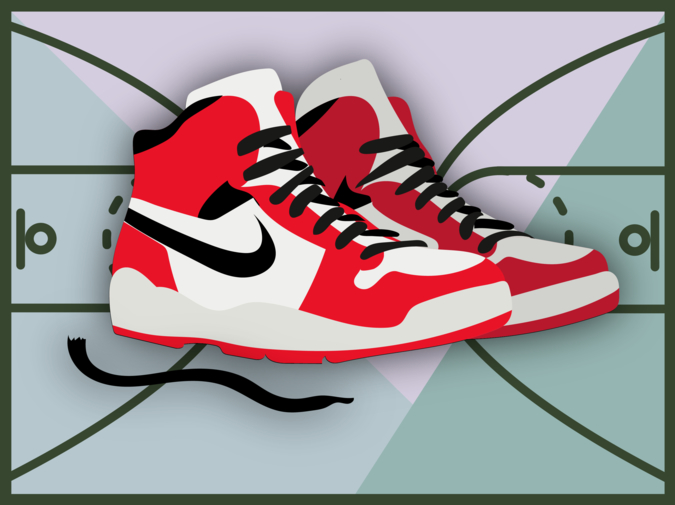 The first doctor who called said I couldn’t play. The scan showed stress fractures and the only remedy was rest. It would have been a blessing the diagnosis came between seasons but, for me, basketball wasn’t a season. Break carried multiple meanings. So when the second doctor called to say there had been a mistake—just some shin splints, just get some better shoes—I went that day to the nearest Foot Locker, tried on nearly every pair of kicks in my size, settled on the red and white Jordan’s for their style, sure, but more for their narrow cut and overall comfort, more because they meant I could keep going.

I was still wearing those same Jordan’s five years later. The shoes accompanied me to college—one year at the first school, two years at the next. Then, I got the apartment I thought I wanted outside D.C., but broke my lease and moved to San Francisco. I broke the shoe laces on my Jordan’s too, but I just re-tied them. The girls I coached in California laughed and told me J’s were just for style but when my feet ached again, I bought another pair anyway—same shoe, this time in gray.

Then I lost them. I can see the gym I was playing basketball in that night, can picture my friend and I sitting in the back-right corner of the bus on the ride home after, could draw you its precise route. I remember the season had just ended for the girls I coached, that another was about to end for me too. I knew I was leaving San Francisco but I can’t figure out where I left the shoes, don’t know why I didn’t just put them in my bag, have no clue as to where they are now.

I lived in a beach town next, worked as a bartender. I told myself I’d write a book that summer but I still bought blue Nike’s at the outlet mall nearby. The new shoes were wide and ill-fitting, though. I only wore them once. It was me, a group of guys from the bar and a bunch of senior week kids playing something that could maybe be called basketball. When the season ended and I left the beach for good, I didn’t put the shoes in my bag on purpose. I haven’t played since.

A few months after my next move, my mom, who recently quit her job, called to tell me she had quit another thing, this time, a rowing club. I was in a grocery store, looking for limes. You’re taking a page out of my book, I said, finding the fruit and balancing three in my palm. But why are we so hard on quitters? No one can carry everything. So I revised my response. You’re not quitting, I said. You’re choosing.

Basketball helped me grow when my world was small and it grounded me when my world was growing, but even that doesn't spell forever. Besides, I could tell the whole story so differently, cross it all out. (Everyone likes to talk about narrative arcs, but when I think arc, I think incomplete.) I could un-romanticize my attachment to a pair of shoes, romanticize my commitment to change. I could tell you that seasons and suitcases can be endings and beginnings, that sometimes what we think of as loss is really opportunity, that no one can carry everything, that it's okay to choose.