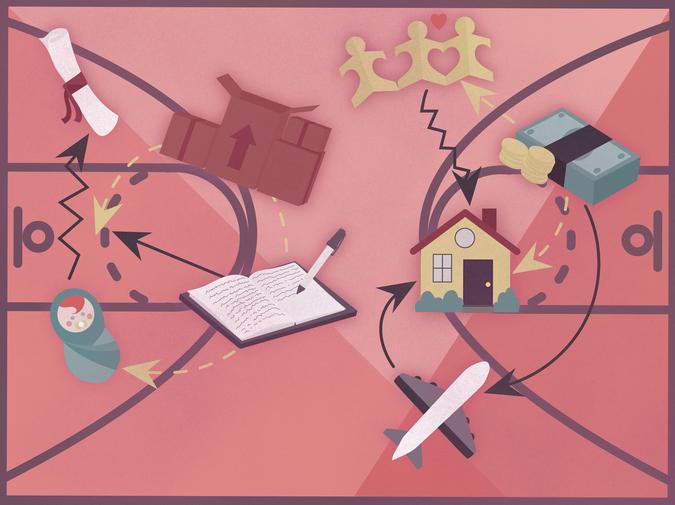 In my favorite bookstore in a city where I no longer live, there’s a sign for sale that says: when in doubt, turn left. I don’t remember the name of the gym where I spent my adolescence, but I could drive you there: up Main Street, over the mountain, onto the highway. The gym is visible from the interstate but tucked away, like most of my favorite places are. You take the exit for the movie theater, the one where I had my first date, but you drive past the cinema and the Chipotle and the parked cars, turn right instead.

The thing I hate most about sports are their metaphors. Sports offer false narratives, false dichotomies, false meritocracy, false simplicity. Their lies are their only life lesson. But the thing I miss most about sports are their metaphors. I miss those lies, miss wearing them like a uniform, miss lacing them up inside an empty gym in the early morning, miss building my identity around them, around something. I didn’t question the fact that I had to shoot, had to lift, had to get better. I didn’t ask why. I just tossed a basketball into the passenger’s seat of my Jetta and headed up Main Street, over the mountain, onto the highway.

Sometimes I think I miss having a blueprint. Coaches handing me plays and lifting programs. Pistol Pete, on the TV, teaching me to follow through. My dad, post-win, critiquing my shot selection. There being good shots and bad shots, wins and losses, seasons and off-seasons. But then I remember I’m offered blueprints all the time so I guess I just miss believing in one.

I would start under the basket, spin the ball out to the baseline, follow it there, pivot on my left foot for a shot on the left side. Then, I’d chase the ball down and repeat the routine on the right. Ten on each side, move to the wing. Ten on each side, move to the elbow. Two foul shots between each set, while you’re tired, so it’s game-like. Move to the three-point line. Add a ball fake. Exaggerate each fake the way my dad taught me. Follow through like Pete.

I’ve lived in five cities in the last two years. When in doubt, leave. People keep calling me a free spirit but I can feel myself grasping for some certainty. Every few months or so I try to find it through basketball again, but it always falls short. I try to apply basketball’s blueprint to other things. I try a new sport, try to make writing a daily practice, pretend the coffee shop where I sit and study for grad school is a gym. But the new sport is packed with the same old lies, while writing and grad school are the antithesis to certainty. There are no good shots. There are no winners.