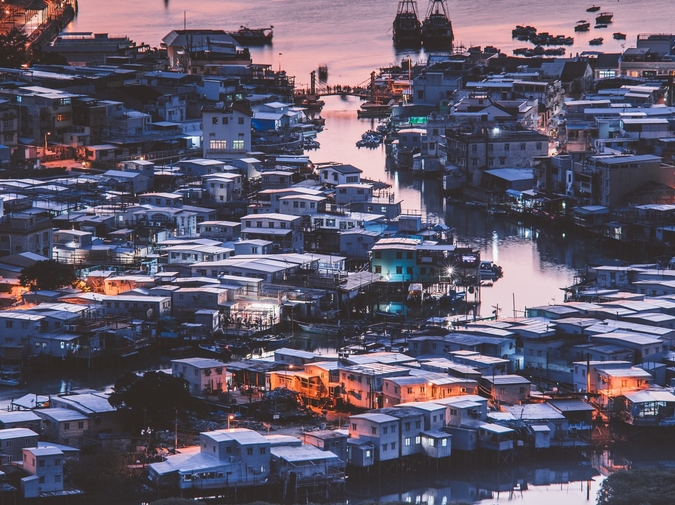 Lee and Aiko made a deal; one last trip together. They deserved that much. They could make it feel like the end of something, if that’s what it was going to be. Both wanted tropical heat, a dense and complex city. They broke themselves on boat tickets. Shenyang to Hong Kong. They stepped off dry land in darkness. Aiko slept on Lee’s arm. The waves were ferocious. The captain spoke through the intercom. He reassured everyone, storms were nothing special. He was experienced.

“I’m like a mighty fish,” the captain said, “I smell dark water.”

Lee wondered if fish could smell. Lee and Aiko huddled together. They ate spray as Hong Kong came at them like a fever.

Aiko asked if they could stay in the Chungking Mansions, because of the film. Lee paid for a double, windowless room. In the room was a holographic painting of a waterfall. Lee tried to turn it off, but only shifted the colours from turquoise to red. The mansions sold electronic remedies. Pillars of wires, fairy lights and plastic casings. Each store screamed like Christmas. The sound of currency beat you unconscious. Outside, watches begged to be sold. Palm trees hustled street corners.

Aiko bought them breakfast. They ate roti with goat.

“Have you eaten it before?”

Lee watched as Aiko tore the bread into smaller and smaller pieces until floury dandruff littered the table.

“What do you want? The goat to come and tell you itself?”

They left the food on the table. Lee promised to come straight back and bought a bottle of Original Choice, then hid it in a pocket.

They walked to the ocean. Lee found two meters of sand. Aiko said the water was poisonous. With rolled up trousers, Lee misspelt Aiko’s name. They argued about dolphins. Aiko said they were kind. Lee replied that this was commonly accepted bullshit. They sat apart and pretended to watch the waves. Aiko played on a phone. Lee feigned interest in the horizon, taking secretive sips of whisky. Lee said the boats had not lived up to expectations.

Lee wondered what it was they were talking about.

“Is this still about the fucking dolphins?” Lee replied.

They walked aimlessly. Lee took them to a night market where they picked up small plastic solutions and tried to entertain each other. Small plastic cars, plastic glasses. A plastic fish with a magnet for a nose. Lee tried to remember if fish had noses. Lee bought the fish and gave it to Aiko. When they separated down the aisles, Lee drank more. When the bottle was finished, Lee hid it on the street and felt secretively proud. Aiko took pictures of the lights above them.

Lee threw up in their windowless bathroom. Aiko lay on the bed with the TV on and played on a phone. Lee begged forgiveness. Aiko flicked the switches behind the holographic waterfall, turning the colours back to turquoise. Lee asked for forgiveness. Aiko said that it was fine and that it didn’t matter. On the TV, a contestant answered correctly and won, but there didn’t seem to be any prizes. Aiko wished that there was a place to throw the plastic fish away. The sounds of Lee being sick carried through the room.

They promised themselves one more day. If that didn’t work, they’d find a boat back to Shenyang. They took a ride out to one of the islands. The island was made of Styrofoam. Shellfish struggled and drowned. People ran up and offered them handfuls of dead shrimp. The island had few, lonely visitors. They sat on plastic stools and joylessly ate crab. Lee found a store that sold whisky and bought more.

“Why even hide it?” Aiko asked. So Lee drank on the little plastic stool while they cleaned the last of the shells.

Aiko asked the store owner what they should do, and he gave them directions to a mountain path. They walked though jungle and saw no one for hours. Mosquitos attacked Aiko’s feet.  When they reached the top, they sat down and ate chicken heads out of transparent bags. They spat oily bones into the jungle. Lee continued to drink.

“I guess we just go back down,” Aiko said.

“I can totally see your house from here,” Lee said

“I can see your future from here.”

They stood and started down a different path, returning to the ocean.

The path led to a clearing in the forest. The clearing was filled with water soaked, plush toys. There were hundreds. The plush toys had been arranged mostly without order. There was foam and felt and button-nosed chaos. Plush faces lay on top of each other. Paws jutted out, desperate for help. In the middle of the plush mountain was a children’s garden house. The house was plastic and multicoloured. It had a blue plastic door, little pink plastic windows and a red plastic roof. The house was overflowing with decomposing plush figures.

“See,” Lee said, pointing to the house, “Renting here’s a bitch.” Aiko leaned over several of the plush piles and took photos.

“Hell of a coincidence if they all just found their way here.”

Lee squeezed a plush limb with his shoe. Dark water leaked out.

“Can we leave?” Aiko asked.

“We should find somewhere. Eat lots of food, and then not leave the mansion for 24 hours.” Aiko said.

They found a restaurant serving dishes of brown meat. Aiko uploaded the photos of the plush graveyard, which Lee immediately liked. Lee messaged roommates back in Shenyang. They shared the pictures of the plastic house, the rivers of plush, even the hanging bears with as many people as they could think of.

“You are having an adventure,” people wrote. Lee and Aiko shared their responses. They swapped phones enthusiastically. The restaurant began to close so they took their food and walked back to the Chunking Mansions. Outside, watches still begged to be sold before the storm caved in.

Aiko washed, then lay on the bed next to Lee. They turned the lights off, leaving only the TV and the holographic waterfall running. A new contestant won. They hugged the other guests. They hugged their mother, who was waiting in the dark wings of the stage. Lee asked if when the storm cleared, did Aiko want to get a boat back to Shenyang.

The contestant began a speech about the pride they were experiencing. Their mother explained the hardships they’d all endured to get this far. The storm outside could have been tearing Hong Kong apart. Cars could have been overturned, buildings collapsed. No sound penetrated the Mansion walls, only the echo of other people’s TVs, other people’s showers. Numerous phones alerting. Lee looked down at the end of the bed, and saw two pairs of feet glowing. An advertisement for milk depicted a ponytailed girl running towards a cow in a yellow-green field.

“When did you fix the waterfall?”

Aiko took a picture of the running water and posted it online.

The last day in Hong Kong, the caption read.

James Kramer is a writer straddling irrelevancy like a champ. He’s appeared in various magazines made of paper and internet and is sometimes at @JamesAKramer1.