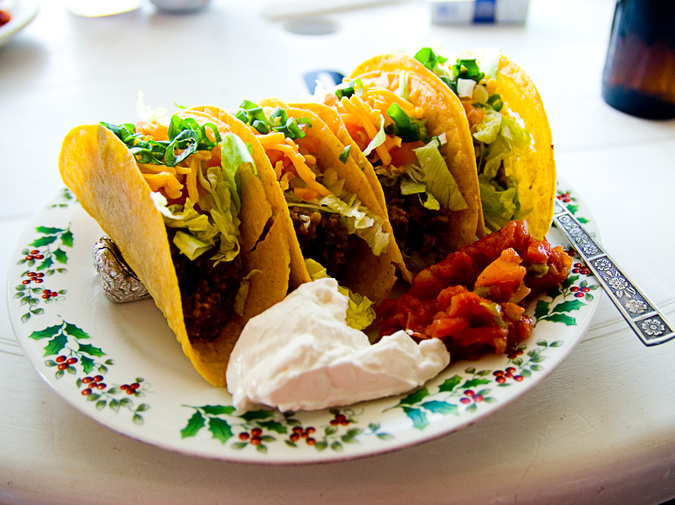 “I’m helping you get in touch with your heritage,” Susana said to Tom, foisting the grocery bag onto the counter.  She pulled the tub of sour cream out, along with a ziploc bag of cheddar cheese shreds.  Then she took out the piece de resistance: a deluxe taco kit, containing a packet of powdered seasoning, mini packets of hot sauce, and extra long taco shells, perfectly stacked and identically sized.

“I’m making these especially for you.  Surely the entire city of Patzcuaro, Michoacan is joining my grandmother as she tsk-s us tonight, wailing from her grave.  She is rising in the middle of the night to pound a ball of corn masa with the calloused palm of her hand, frying the tortillas on her trusty rusty griddle, just to make a point.”

“Could there be anything whiter than the boxed taco kit?” Tom asked, peering over Susana’s shoulder, arms wrapped around her waist, staring at the ground beef sizzling in the skillet below.  “Well in fact, yes,” Susana answered, shaking the spicy orange powder evenly onto the crumbles.  She added water and together they watched the powder dissolve into a comforting technicolor glow.  “I could melt you a vat of Velveeta, fold in buttermilk ranch dressing, and we could bathe in it, pouring ourselves goblets of purple kool aid, toasting to our good American fortune.”  Tom squeezed her around the middle and lifted her, spun her around, her feet flying like a pinwheel.

In Susana’s short dating life, the other two white men had chosen to take her to a Mexican restaurant within the first two dates.  They were different restaurants entirely but had similar music soundtracks and blue-stemmed margarita glasses.  “Do you like this restaurant?” each had asked, stopping her mid-bite into a nacho chip smothered in guacamole, chipotle salsa dribbling off her lip.  They had expectant looks, like owls with binocular vision perched on tree branches in the dark, heads spinning too far, too fast, in both directions.  Later, one gave her a Rick Bayless cookbook for Christmas, Fiesta at Rick’s, Fabulous Food for Great Times with Friends, with the chef on the cover clapping, grinning with an open jaw.

At age fifteen, Susana had turned down her mother’s offer to throw her a Quinceañera debutante ball.   She wanted a Sweet Sixteen instead.  In arguing with her mother, she had blurted out her new personal manifesto, stolen from her classmate Namratha, who refused to wear a Sari to her eighth grade graduation.  She announced, as if it were written into the U.S. Constitution, “it’s an immigrant child’s right to choose.”  Susana’s mother’s eyes darted around, then went downcast, just like Namratha’s mother’s did.  Namratha’s mother had later cried in secret.  They could not stand to be responsible for having reared daughters that were dead ends, living funerals, where traditions that trudged across continents and oceans came home to die.

Tom knew she’d only ever lived in Tuscaloosa.  Thomas Henderson had thought to ask Susana Hernandez, “Do you like Mexican?,” acknowledging that perhaps she might rather eat barbecued ribs and biscuits.  Which was why Susana Hernandez was making Tom Henderson this taco kit, a favorite meal of his from his childhood in Alabama.  His mother had made it for him every Tuesday, based on a Good Housekeeping magazine “Taco Tuesdays” idea that landed through her mailbox slot in 1976.   Tom had given Susana the right to choose.  In return, she gladly assembled him tacos from a kit, the way he remembered them.  Susana was extra careful not to break the fragile shells when removing them from the thin plastic film.

Claudia Cadavid is a student at the University of Chicago Writers Studio with a concentration in short story.