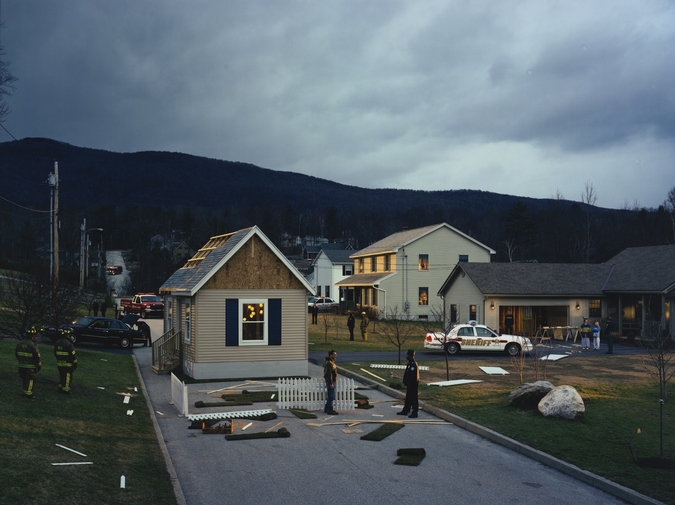 On the last day of a writers’ conference I stopped at the candy store to buy fudge for my husband, saltwater taffy for my daughter and a little something for myself, a jumbo box of Lemonheads. That night the attendees gathered in a dimly lit pub for libations and readings from our professors. I sat across from a petite woman with enviable hair. A barmaid hefted an armload of steamy platters past our table.

“Everything is so large,” my dinner companion said.

Though I could have polished off a whole entree easily enough, I offered to split. We agreed on the shepherd’s pie. I shoveled half of the bubbling, potato-crusted stew onto a plate and dug in, famished after a day reviewing manuscripts. She told me she’d been a child actress in television situation comedies and movies. She’d published short stories and novels. Been a circus performer.

I swallowed a big bite and said that I’d retired to write after thirty years as a civil servant. “Worked my way up through the ranks,” I added, with a humble shrug, “from clerk typist to executive director.” I paused to smear butter on my bread.

“Ah, so you’ve had an ordinary life,” she said.

I held my butter knife aloft. She turned to someone else.

Back in my hotel room, I cracked open the Lemonheads and consulted the dictionary. “Ordinary,” was as I’d feared:

Normal or usual, as in, not unusual, different or special, and;

Neither very good nor very bad, as in, not very impressive.

I scribbled lists of synonyms. Conventional. Average. Boring. The “un” words, the “not something” words, were the worst. I popped another handful of Lemonheads. My taste buds were chaffed. I ignored them. Does anyone aspire to be unexceptional? Unmemorable? Who says something like that? Bitch.

To have enjoyed a normal life is not a bad thing. We want our babies to have ten fingers and ten toes. In literature, ordinary characters are universal embodiments of the human experience. Who has not thought, if only I had a normal life—a lover, a job, to be married? There are those who wish for things others take for granted—two functioning legs, cancer-free breasts, the ability to conceive.

Ordinariness is relative and relational. My loved ones are not ordinary to me, nor am I to them. They see past the plain words. Wife. Mother. Government drone. They see me. I poured the last of the Lemonheads into my mouth and ripped the plastic wrap from my husband’s fudge.

And what of YouTube sensations and reality TV show stars. What is the allure of the tattered People magazine in the dentist’s office? Why must I know what’s up with the prolific Duggar family, with Kanye and Kim? Will any of it matter in five years? Does it matter now? Are these extraordinary lives? Fudge thick on my tongue I reached for a palate cleanser, the saltwater taffy.

With a sick stomach, it dawned on me that this chafing against being deemed average, inconsequential, goes to the heart of the most basic human fear, the inevitability of our mortality. Billions will live and die and leave little perceptible trace. They may have led notable lives. They may even have ridden elephants in the circus and been on television. And what of it?

Still. Yet. Regardless. There will always be art and literature, thought and expression, the effort to make sense of the human experience, to frame the ordinary in ways that make people think, feel and wonder.

Like Marlon Brando’s character in the 1950’s classic, On the Waterfront, I want to be a contender. I want to be somebody. Indeed. Not wanting to be ordinary, not wanting to perish as if I never was, is ordinary. I am ordinary. She was right, and ordinary too in her desperate need to appear not to be.

Taffy wrappers littered the bedspread like wax paper fortune cookies. Ah, the wonders of the writers’ workshop, of words, how they are meant and taken. To be moved by a single word to fritter away the hours before dawn, pen to page, sucking on something sour and sweet, struggling to extract its essence.

Dorothy Rice lives in Sacramento, California with her husband and the youngest of five children. Following a career in environmental protection, she received an MFA in Creative Writing from the University of California, Riverside. Her writing has appeared or is forthcoming in publications including The Rumpus, Still Point Arts Quarterly, Brain, Child Magazine, the Louisville Review andThe Saturday Evening Post online. Her first book, The Reluctant Artist, about her father (Joseph Rice, 1918-2011), an unknown artist, will be published this year.