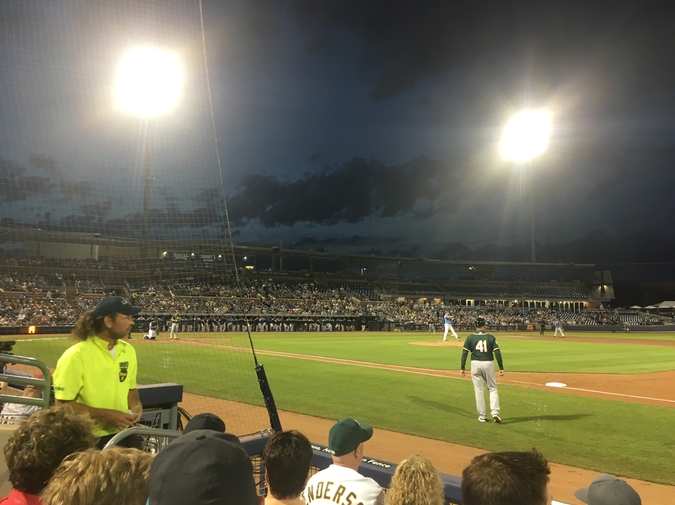 Bucking modern trends, the ballpark remained nameless. From the day it opened in 1984 to its closure in fall 1996, the naming rights were never sold, or considered for sale. No aspect of its marketability was discussed in any boardroom. Memorabilia was not available for purchase. There were zero replica helmets, zero foam fingers. Concessions were nonexistent. The playing field was not defined by a single iconic feature. There was no long-enduring hand-operated scoreboard. Ivy did not cling to the outfield walls. If anything, the venue was defined by its near-constant evolution.

In the early days, a bigleaf maple stood in foul territory down the third-base line, casting shadows over much of the infield. The tree was removed in 1991 because the maintenance crew was tired of raking leaves. The playing surface was of good quality, grass, flat and lush, except in the left field corner where a steep berm rose toward the foul pole.

The foul poles were essential. They were fashioned from scrap wood found in the garage and sawed to the appropriate length and nailed together in the customary shape. Cheese cloth netting was then stretched across the wooden frame before the completed apparatus was nailed, without permission from the ballpark owner, to the existing fence.

Visiting players laughed at the amount of care that had been put into the foul poles' construction. It was only whiffle ball, they said. They were told the foul poles were for fairness, but the unarticulated and more salient truth was that foul poles are one of life's few distinct boundaries, and a child coming to grips with the malleability of the world might, without knowing it at the time, find comfort in something that so clearly delineates one side from the other. Fair or foul can be debated, but there is always an objective truth when it comes to this issue, however obscured by a player's vantage point or the shadows cast by the maple tree.

Removal of the tree, along with the continuing physical maturation of the players, brought the home run increasingly into play. Retrieving home run balls was perilous. The neighboring yard beyond the center field fence was radically unkempt. Waist-high weeds had long ago entangled random junk strewn about by the home's careless but seemingly kind owner. A large dog patrolled a patch of dirt behind a second smaller, less trustworthy fence. Near the dog pen was a poorly constructed latticed deck with a clandestine hot tub that had no view of the disorder lurking beyond its shores. Standing in center field at certain hours of the evening, well after dark, when play had long since ceased for the day, a player could occasionally hear suggestive laughter emanating from the hot tub area.

In the early years, with the exception of the raised portion in left field atop the berm, the outfield fences were of uniform height. In the early 1990s, as the owner of the ballpark became increasingly interested in golf, a makeshift net was erected above the center field fence. The owner hit golf-sized whiffle balls, one after the other, into the net, which was framed by two-by-fours and screwed to the existing fence posts so that the fence effectively doubled in height.

The addition of the net caused considerable discord among players. Was a ball that struck the net in play or was it a home run? The argument simmered for weeks. It was initially determined that the net was in play, and no one was happy because it was harder to hit home runs and playing balls off the net was gimmicky, like contending with a lesser version of the Green Monster at Fenway Park. Thus, the rule was never consistently applied. It changed day to day, game to game, based on the whims of the players.

Each base was unique. First base was a worn section of the patio, which was really just a concrete slab next to the the owner's prized lace-leaf maple (there was a zero-tolerance policy for damage to the tree). Second base was one of 10,000 bleacher cushions given to fans in attendance at a Mariners game at the Kingdome. It was mustard yellow with a navy-blue triton logo, and it deflated audibly each time a player's shoe landed on it. The cushion was a liability because it was not anchored like a real base. It just rested on top of the grass. Because of this, a player sliding into the base would end up knocking it halfway across the fucking yard, and a player trying to round second for a rare triple was likely to lose his or her footing and end up flat on his or her back in the grass.

Third base was the center boulder in a small rock wall at the base of the maple tree/stump. Players fortunate enough to make it that far could not stand on the base due to its irregular shape. Rather, they placed their right foot on top of the boulder while their left foot stayed in the grass, so that they looked like a miniature version of the pirate on a bottle of Captain Morgan's. Home plate was any number of flat, portable objects brought in over the years. The plate had to be portable because the owner prohibited batters from standing in one place for more than a few days at a time, a rule that was put in place to protect the grass from long-term damage. Nonetheless, the grass near home plate was always brown.

In the summer of 1992, following the death of the family cat, a gravesite was erected in the right field corner. The memorial consisted of a small rock and a wooden placard bearing the deceased cat's name. A batted ball that landed in the area was, charitably, for hitters, an automatic ground rule double forever after.

Like the field, the bats evolved through the years. Actual bats – that is to say plastic bats manufactured for the purpose of playing whiffle ball – were rarely used. The players favored makeshift bats, fashioned from an old shovel handle or broomstick and partially taped for improved grip. They were more compact, quicker.

Players in the league emulated every notable player of the day, but none more than Ken Griffey Jr., who was not just a local revelation but a bonified generational superstar whose swing, it turned out, was inimitable. Still, all players in the league, as a result of this left-handed mimicry, became serviceable hitters from both sides of the plate.

The calendar turned. Seasons passed. The players moved on. Their idols retired; some were enshrined, others were disgraced by scandal. The hometown Mariners hobbled along in predictable futility. It is believed that no game has been played at the ballpark since its sale in September 1996. In the intervening years, the grass around home plate has, presumably, grown back.

Today, across town or across the country, the players spend hours alone in their respective garages, listening to ballgames while performing rote household tasks. Surrounding them are objects commonly found in garages, including scraps of lumber, some long and cylindrical. In name these objects are broomsticks or closet rods, but in the minds of the players they are, as ever, potential bats. They are periodically lifted and waggled by the players, now stiff and out of practice but no less enthused as they stand in an oil spot, measuring the object's weight, staring down the barrel. They imagine wrapping it at one end with electrical tape and swinging it with force in an open field, smacking a white plastic ball with holes that whistle when launched through the air toward tangled weeds and refuse and skeezy hot tubs. Invariably, there is mystery beyond the fence, any fence.

There is also, for the players standing in garages, the comfort of knowing that a game is happening, maybe not here but somewhere, on some improvised, shape-shifting diamond. Right now, with screaming velocity, batted balls are exiting nameless ballparks for unkempt spaces stalked by frantically barking beasts. The solidity of contact is registered first in the hands. The knowledge radiates outward from there. You know it's gone the instant you connect. The only question is where the thing will finally, mercifully, land.

Chad Schuster's fiction has appeared in Glimmer Train, Potomac Review, Barrelhouse and elsewhere. Find him at www.chadschuster.com or on Twitter.