Stir It Up: Katie Gutierrez talks about family recipes, writing with limited childcare, and her new novel More Than You’ll Ever Know 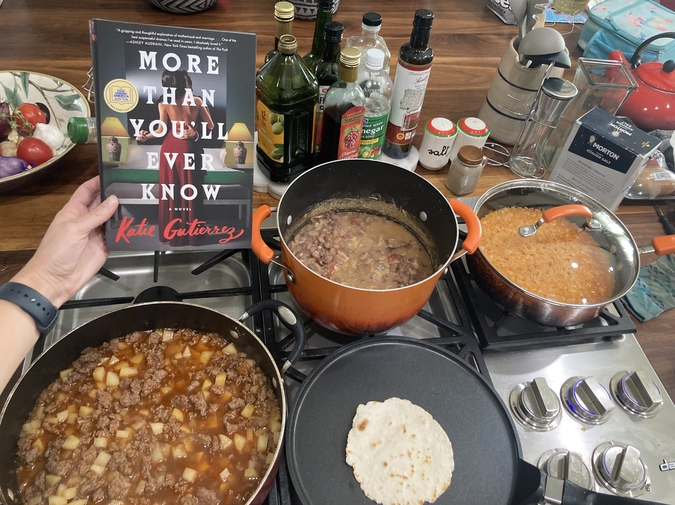 Once upon a time, long before she was on Good Morning America, I met the kindest writer on Twitter. Not only was she a relatable mother-writer, but she also understood Scrivener. This was absolutely wild to me. Until that moment, in fact, I was convinced Scrivener was a money laundering internet scam. However, this writer promised me that it was a real, actual writing tool. That it could be mastered! Then she sent a tutorial video that she made herself, despite not really knowing me at all. Who does that?

And she was right! It’s pretty great, actually!

So that’s how I “met” Katie, before I’d even read her work. After that, I dove into her incredible essays, and even had the privilege of publishing one at JMWW. (Which became a Best American Essay Notable!) She’s a remarkable storyteller, her voice convincing and distinctive no matter what genre she’s writing in. And her new book More Than You’ll Ever Know takes that gift and runs with it! It’s a fast-paced, yet gorgeously-written mystery that perfectly bridges the literary and commercial book worlds. It was my pleasure to interview Katie about her writing, her favorite foods, and the challenge of living in Texas as a woman right now.

Katie Gutierrez: I have a lukewarm cup of coffee that I’ll probably go microwave, and I’m hoping by the smell of bacon that my husband made enough for me. (We usually fend for ourselves for breakfast based on who’s up first with the kids, who takes our oldest to preschool, etc.; today was his morning.) If the bacon doesn’t pan out, I’ll heat up a flour tortilla left over from our last run to Taco Palenque, our favorite 24-hour Mexican place.

Now tell us about More Than You’ll Ever Know!

It’s about Lore Rivera, a South Texas woman—and mother—who is secretly married to two men at the same time in the 1980s, and Cassie Bowman, the aspiring true crime writer in 2017 who becomes determined to tell Lore’s story. It’s an exploration of marriage, motherhood, female ambition and desire, and our cultural obsession with true crime. (Can you tell I’ve got my elevator pitch down at this point?)

If More Than You’ll Ever Know were a metaphorical recipe, what would the ingredients be?

It would have to be hearty, with a mix of ingredients; spicy, but also comforting. Passed down from your grandmother, maybe, with cultural roots and stories attached to it, but shifted a little for your particular tastes. I’m thinking of Tlalpeño soup, which originated near Mexico City, where much of the novel takes place.

I am . . . not good in the kitchen. My husband is the one who knows his way around a good recipe. But when I think about my book, I think of Sunday lunches at my grandpa’s house. My dad has three brothers, and all four families would go over every Sunday at two, without exception. We each brought a side or dessert: rice, beans, pan dulce, birthday cake. (With up to 20 of us there each week, it was often somebody’s birthday.) My grandpa spent hours at the barbecue pit before we got there, making platters of fajitas, sausage, chicharónes, and chicken. He made enough meat that each family took home leftovers in Ziplock bags, and they were repurposed into several different meals throughout the week. There’s a scene in the book inspired by these Sundays, so when I think about a recipe or meal that feels like my book, this is it—a South Texas carne asada made with love.

Every single thing you're telling me sounds so delicious! What was your favorite family recipe growing up? Any chance you could share it?

Hands down, my ñaña's tortillas. (I've written about my ñaña, who is my daughter's namesake, here.) The recipe is approximated from my sister watching her, because she never took measurements. And, despite having the recipe, which seems deceptively simple, I've never been able to get them right. But here it is, the recipe for Josefina Arellano's flour tortillas:

Mix until well blended. Add 3/4 cup warm water little by little--NOT all at once. Add more flour if dough feels too soft. Cover with plastic wrap and let sit for 2 hours. Shape into 2-inch balls and roll out onto a floured surface until very thin, almost translucent. Heat preferably on a cast iron tortilla comal, medium heat. Wait for bubbles to rise, then flip to other side. Don't pop bubbles or flip again. About 45 seconds for first side and 20 for second side.

If anyone gets them right, please let me know!

Okay, and most importantly: what do you eat while you write?

I find it difficult to eat while I write! Maybe I choose the wrong foods, but I end up greasing the keyboard too much with my fingers or getting so distracted that it becomes a complete break. BUT each time I make a fresh cup of coffee, I’ll grab something from the fridge or pantry. Usually it’s something like a piece of ham I’ll wrap around string cheddar cheese, or maybe a quick peanut butter sandwich—something to tide me over until the inevitable moment my husband comes into my office and asks what I want for lunch. We eat lunch together every day.

Lunch together every day! That's amazing! So...this means you write for big chunks of each day, yes? What does your typical writing schedule look like?

Hahahaha. Definitely not. It just means we're both home full-time, passing our four-year-old and two-year-old back and forth all day while the other person does what they need to do for work. My writing schedule has never been more chaotic, and that's saying something. My husband and I switch off mornings with the kids, so on my mornings "off", or when we have our 9 hours a week of childcare, I try to work, which means switching between book promotion (at the moment), freelance essays, and drafting my new novel. I also try to work when the kids nap/have quiet time between about 2-4, but often I'm so tired that I'll nap myself. Lately I've been trying to work on the novel after the kids are in bed, from about 9-11 p.m., but this is new and I'm not sure it's sustainable. There are plenty of days I don't write at all, and that has to be okay right now.

I can’t resist good flour tortillas. The “good” part is important—I have very high standards. My ñaña, who lived with us since I was born, made tortillas several times a week. We ate them in the morning with butter or baloney, or chorizo con huevo or frijoles; as a snack after school, just by themselves; and with any number of dinners. Her tortillas were light, dusted with flour, perfectly round and pliable. They were a mainstay of my childhood, the ultimate comfort food. A good flour tortilla is home to me, even if none will ever taste like hers.

A food I hate—I’m not a fan of mayo or mustard, so anything like potato salad or coleslaw is always a pass for me. As an aside, both my kids love mayo; they will dip their fingers into it and lick it off, and I can’t even watch.

Okay, we’re all expecting More Than You’ll Ever Know to get optioned for the screen. Fast forward and tell us: Who would be your dream cast for this film? And what do you think each one would demand to have on the Craft Services table?

Fabian: I’ve always like Ricardo Antonio Chavira for him, but he’s right in the middle of Fabian’s two age ranges! Pork rinds.

2017 Lore: Veronica Falcón—I can see this so clearly! I think she’d want something elegant and sharp, like a charcuterie board.

Duke: Not Chris Pratt, but someone with a Christ Pratt vibe; beef jerky.

What’s next for you, in terms of your writing?

I’m in the early stages of my next novel, which is about three South Texas women who are connected over 20 years by a teenager’s forced birth and the kidnapping that follows. I’ve been mulling over the idea for a long time and didn’t expect for it to become so timely, in such a terrible way, but living in Texas, I’m also ready to confront the ways our culture and government fail people who both do and don’t want to become mothers.

Oof, this sounds incredible and so very timely. Can you talk a little about what it's like to write on this topic, in all its political and social (and deeply personal) significance, in Texas right now?

I went through a phrase when I didn't think I wanted to write this book and threw several pretty bad alternate ideas at my agent, who gently guided me away from them. Ha! But the last few years have been pretty brutal from a parenting perspective. The pandemic has shown us the social burdens mothers, in particular, are expected to carry, while that same essential work is unsupported and devalued. I wasn't sure I wanted to spend my time away from mothering writing about motherhood. But I've been such a fireball of rage since Roe was overturned and even before that, since abortion was effectively banned after six weeks in Texas in 2021, that the story feels urgent and alive, which means it's developing in me whether I like it or not. I'm sort of not looking forward to the places I'll need to go with this book, but when I start hearing the characters' voices in my mind before I fall asleep at night, it's over. It's the book I need to write.