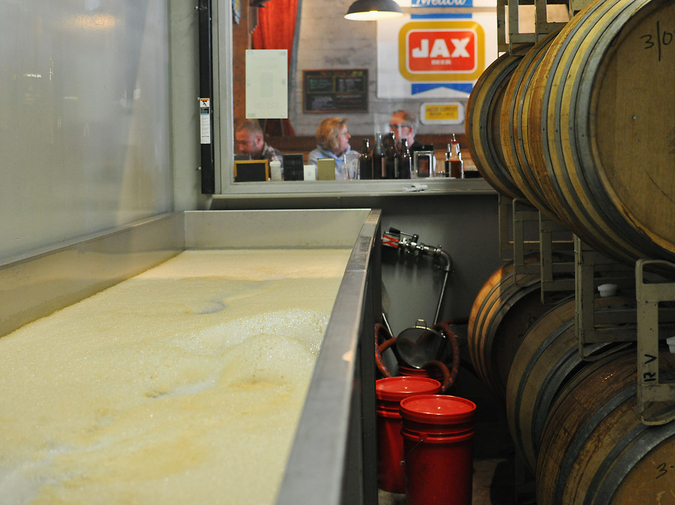 The Ship: Behind the bar is a small window, and behind the window, a small room. On the left side, stacked within metal lattices, are wooden barrels tilted on their sides and filled with unknown substances. Markings cover the near ends—multicolor stickers, handwritten dates, five-digit numbers starting with “0”—while just below are what appear to be small corks, no wider than a pinkie finger. The clustered barrels are stacked three or four high. They look, to the untrained eye, like a stack of barrels. They look, to a trained eye, like a stack of barrels. If you squint really hard and rock back and forth, you can imagine yourself in the hold of a tiny pirate ship. Stay there. To the right of the stacked barrels are two red buckets, half-filled with a frothy liquid suggesting either beer or soap. Tangles of red and grey hoses clutter the space between. For a pirate ship’s hold, it is poorly appointed. The only additional fixture, pressing against the right wall and filling most of the remaining visible space, appears to be the largest and most useless sink in the world. 19 feet long, four feet wide, and three feet deep. There is no faucet. There are no dishes. There is nothing that seems to warrant cleaning, and the hold itself is generally spotless. The metal basin is filled nearly to its top with a hazy, golden liquid. Above the window containing these things—the barrels, buckets, hoses, and sink—is a worn wooden sign shaped like a fluttering jib. The sign says “New Albion,” but it’s a false signifier. This is not New Albion. There is no New Albion, at least not anymore. There is a bar, a sign, and a ship’s hold. Yet New Albion still exists, and to understand this picture is to know why.

The Gremlins: In the distant past, brewing yeast were provided by the surrounding air. The precise origins of brewing and beer making are unknown (as in, we don’t have any particular prehistoric cave to flock to, no one name to build statues and throw parties for), and one has to instead imagine it as a necessary accident: poorly stored ancient grains left to the elements, half-cooked bread temporarily set aside, barley or wheat or rye or whatever preceded them—the certain elements being time and ambient air. From the perspective of yeast…who knows. It was probably like landing on the moon. For the un-statued and un-partied-for first person to discover what had occurred, it was probably like landing on the moon drunk. Eventually it became possible to encourage fermentation—“spontaneous fermentation,” as it were—more effectively, with wooden brewing sticks and wet walls and (much later) red buckets in a small room. Back when airborne yeast remained unnamed and unseen, they were god’s touch, they were gremlins, they were good fortune in physical effect. Brewers learned to coax them and control them and crop them selectively. To reuse them. Scientists learned to isolate them and create uniform colonies of them—which may have also felt like modest lunar landings. They most often arrive today in vials and tubes and carefully tuned monocultures. But they are still gremlins, and fortunate, and suggestive of greater things. In certain locations in the U.S. and Brussels and farther abroad, they are still coaxed from thin air and treated as such.

The Jedi: There is both a linear and cyclic nature to the craft-beer movement. Should one look back 30 years: exponential growth. To the beginning of the 20th century: numerically, at least, we’re back where we started. Should one look to Northern California, things all started (give or take) with Fritz Maytag’s purchase and revitalization of Anchor Brewing in the mid-1960s. The first modern “microbrewery” followed the decade after: a makeshift operation in Sonoma named after Sir Francis Drake’s nearby Nova Albion. Jack McAuliffe’s backup name for New Albion Brewing Company had been, apparently, Barbary Coast Brewing Company. From a particular angle, we’re all pirates. The breweries that did survive, and grew—Anchor, Sierra Nevada in Chico, Russian River in Santa Rosa, many others—shared an inclination to bitterness, of all things. Pale ales, India pale ales, double or imperial India pale ales. Perfected here, one could argue. Linear progressions of higher hop utilization, in a part of the country previously known for hop cultivation a century before. This past February, on his way to the historical society to research gremlins and Sonoma County’s hop-growing history, the author walks past a line of people snaking from the front doors of Russian River Brewing Company to the end of the block and around the far corner. One could imagine a line leaving from the back doors of the brewery, turning the corner, connecting with the other line to continue it: an endless procession through the brewpub. The people are waiting for a beer made with an excess of hops and named after Pliny the Younger, which would circle us back even further. The author has, under other circumstances, heard the head brewer of Russian River referred to in Jedi terms, with utmost reverence, on a panel with the same Brussels brewer who’d first inspired him. Behind the bar at Russian River is a window, a small room, and a wooden sign.

The Horse Blanket: While bitterness is a challenge, sourness is a taunt. Smoked beers, for a brief tangent, are not dissimilar, both in their seeming siren’s call and their harkening to past realities of brewing. Before indirect kilning: smoke. Before controlled fermentation: sour. It’s not for everyone. The entire point is that it’s not for everyone. There’s less artistry in widget-making. In a glass, from a distance: the outcome—gremlins to single-strain fermentation and back; farmhouse to industrial brewing and back; barrels to kegs and back; inevitably sour to reliability and back—is something golden topped with a glistening foam. It hearkens back to the wet walls and good fortune. It speaks of a willful disobedience, in as much as fermenting can convey a message. It speaks of vanillins, of wood, of chaos, of grapefruit rinds, of lemon juice, of salt, of artisanship and the stables. It’s both venerated and off-putting, in turn. It’s a request to approach curiously, to evolve cautiously, to sip and savor and stop for a moment.

The Above: In a small room behind the bar, atop golden liquid in a spacious sink, invisibly and without discernible impact, the first gremlin arrives. The sink is a coolship. The coolship is traditional: wide and shallow with intent. The sink is a sink to the degree that the gremlins are legitimate gremlins: carried by air currents, sniffing out sugar, cannonballing the decks of pirate ships, landing in sinks that aren’t. First one, then another. Time passes. Then foam.

Ken Weaver is a freelance writer and editor based in Sonoma County, California. He's the author of The Northern California Craft Beer Guide with photographer Anneliese Schmidt, published this summer by Cameron + Company. More at www.kenweaver.com.