Soul Retrieval in the Southwest 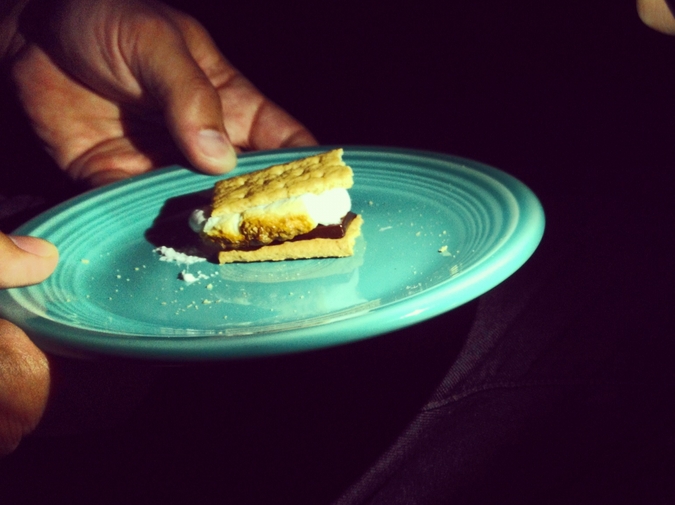 At my friend’s bonfire on a chilly Southwestern night, a blond woman in Birkenstocks approached me and said that her name was Singing Humyn.

“Singing Humyn, with a ‘y,’” she said. She was a shaman, she explained.

Questions sprang up inside me like mushrooms after a rain.

“Oh, why don’t we sit down and talk?” she said. Grabbing my arm, she pulled me to some chairs.

People stood and sat around us, sipping cold beer and chatting. Singing Humyn and I began to discuss interpersonal relationships, and I divulged that I was sensitive to the emotional states of others. She told me that I could be a healer then as well. If only I channeled my energies in the right way. The thinker in me flinched at the idea of “energies,” but deep down I was pleased to no end. I imagined myself as a sturdy woman in skirts and silver earrings, pounding the earth with my bare feet in dance. In the fantasy, dark skies churned above my head.

Singing Humyn tightened her shawl around her shoulders and leaned in. Her eyes sparkled like the eyes of wild children. She told me that her father had been an alcoholic and that she had come to terms with her lesbianism in the seventies and that she had once stood inside a chalk circle until she had faced all her fears. This last bit struck me as absurd but intriguing, because secretly, I had always wanted to face my deepest fears as well. The goal of standing bravely before my own emotional abyss, however, often escaped my grasp. I did what I could to conjure up fear. I journaled in bed by lamplight in order to lure hidden anxieties out of their corners. I walked the night streets alone and looked at stars and thought about the nature of gravity and the brevity of life and about how all the benches and trees looked like stage props when no one was around. But in these controlled environments, when I was alone, little emotion sprang up. What emerged instead was a philosophical fascination with the workings of the world. Fear overtook me at inopportune times instead, as I sat in business meetings or chattered away before interview committees. And when this fear arose, it rolled down the slope like the giant boulder from Indiana Jones, and then there was no facing it with open arms. But this woman had done it, she said. She had faced the boulder and then walked out of her chalk circle with her chin up high. One had to admire that.

So I told her everything about myself. I told her about being a war refugee from Bosnia and about then moving to Spain at the age of seven. I seldom spoke so quickly, but this was one of those rare occasions when my mind and my mouth were in total sync and I was understanding myself better and better as my words poured out. I was even starting to admire my eloquence. And then she said something I could have never predicted.

“Why don’t we go inside the cabin and do some soul retrieval work?”

The intellectual in me sank like a bad soufflé. But she looked so earnest in her request and she had listened to me so well and had paraphrased all I said with care, that I found myself saying, “You have to understand that I don’t see the world in the same way you do, but I admire how genuine and present you are, so okay.”

So we entered my friend’s cabin—cats lounged in corners, one leapt down from a chair—and we settled on the old sofa and faced each other and held hands. The place smelled like a toolshed, and a bear’s head hung above the television set. I am an affectionate person—I touch people’s arms and backs in conversation—so when Singing Humyn squeezed my hands and said, “I’m going to hypnotize you, but we can keep on touching if you’d like,” the whole thing felt like a comfort and a soft bed. I felt cradled by the great fingers of the world, and I thought it lovely that people as direct and caring as her wandered the earth.

So she asked me to close my eyes and think back to the first time I felt fear. I ran through my history—countries I traversed as a child and walks through parks and sunshine and long women’s hair—and I settled on a scene of a little girl sitting on a bus, twenty years ago perhaps, gazing at her father through the window. It was the moment my mother, my brother, and I were leaving Bosnia. My father was going to stay behind. We did not know then that the capital would fall under siege and that he would remain stranded in the city for three years.

My mind zoomed into the scene of the departure. I became aware of the overhead lights inside the bus, of the tall metal-framed windows, of the reflections of people’s faces and bodies in the glass. It was as if the whole world had shrunk in size and condensed itself into the space of that small bus station.

I heard Singing Humyn’s voice say, “Ask the little girl to tell you her story.”

I retreated in embarrassment—this suddenly felt like a children’s game—but after a moment, I dutifully pushed myself to do what she said. I pictured the little girl standing before me, inside a small room now, plucked from the setting of the bus station, and I asked for her story.

But she did not want to participate. She looked at me with distrust, lowered her chin, and clasped her little hands behind her back. I waited, Singing Humyn waited, and then, when the silence had stretched into discomfort, I apologized out loud.

Yet her voice seemed to hit a note of impatience, although it was hard to tell if she was indeed impatient since I could not look at her face. Self-conscious, I focused my attention laser-sharp on the girl. After a moment, the child finally said something nebulous about waiting and darkness and questions and closed spaces. I reported all this back to Singing Humyn. I asked if this was okay.

“Yes, it’s fine,” she said. “Now open your arms wide and ask the little girl into your embrace.”

I was quiet. Then, “You mean physically? Or in my mind?”

So I opened my arms wide—they were a little shaky and uncertain; hugging the air was new for me—and I waited for the girl to come. She walked into my arms, looking as reluctant and distrustful as at the beginning. Her form pressed against mine and then merged into my body. Faint warmth stirred inside my chest. Was this a sign that I was doing this right? I suddenly felt sure that it was. A little quiver of pride raised its flag somewhere deep inside.

We turned to another point in my history—I was an adolescent in Spain now, fighting in screams with my mom—and when Singing Humyn asked me to open my arms so that the young woman could come into my embrace, I flung them open like the sails of a ship. I was an experienced soul retriever now, and I felt the self-assurance that came with it. But instead of the adolescent walking into my embrace, my friend’s cat plopped onto my lap. My eyes opened wide and I turned to Singing Humyn and laughed. She gave me a dead stare. My laughter ceased. I shut my eyes again.

We visited another episode in my life and then another, each one ending with a hug to the air. Then, Singing Humyn told me that I could open my eyes. When I did, she looked as flushed and happy as someone who’d just had sex. She said that soon, very soon, everything in my life would change. That people had emailed her and called her in the past to say that when she’d done this for them, they’d turned a corner, they’d started new lives. Then she fell silent and stared into my eyes as if we were the oldest of friends.

I didn’t know what to say. It felt like a long shot that my whole life would change. But I felt hesitant to let her down, to make her feel that after all this, I wasn’t emotionally right there with her. I sometimes had a difficult time being as emotionally open to the moment as other people were, and I wondered if this was one of those times. So I said something about the warmth I felt when the little girl walked into my embrace and I asked whether people usually felt that way—it was my way of turning the spotlight back on her—but she just nodded eagerly, like a thirsty man eyeing a cold drink, and waited for me to say more.

Cheers exploded by the bonfire outside. Someone had just finished a tune on a guitar, and people were laughing and hooting and hurling jokes into the air. I became very conscious of our seclusion within the four walls of the cabin. I felt a grain of guilt in not feeling connected to her. I knew, intellectually, that we simply had different worldviews, but my guilt persisted like a pea beneath the mattress. And part of me—some deeper, younger part—felt not just guilty but inadequate in not being able to emotionally meet her head-to-head.

“I know the people out there are your friends, and I feel kind of self-conscious,” I said. “I hope I’m not taking you away from them.”

A gate seemed to fall shut within her eyes—one of those old-time castle gates—and she sat up straight and dropped my hands. “I wouldn’t have invited you inside unless I wanted to do this.”

But she continued: “Now I’m going to go to the restroom, and then I’m going to return to the party.” She tightened her lips into a fake smile.

She rose to her feet, and I stood too so that she could pass. When she was gone and I could hear the pipes in the bathroom, I dawdled inside the cabin a bit, by the door. It felt as if hundreds of eyes watched me from every direction. It felt as if I had been bad in some horribly embarrassing way. And yet I could not quite understand what I had done.

I returned to the party, and I sat among the circle of people around the fire and downed some cold pizza on a paper plate. My friend played guitar to her admirers across the way. People—most of whom I did not know—sang along or smiled. My childhood, a cloud of discomfort and fear and guilt, floated above me. I felt helpless and alone and a thousand miles away.

The shaman emerged from the cabin—radiant, smiling, relaxed—and sat with another woman and held her hand.

Lana Spendl’s work has appeared in The Cortland Review, Greensboro Review, Quarter After Eight, Atticus Review, Monkeybicycle, Prick of the Spindle, and other journals. She holds an MFA in creative writing and an MA in Hispanic literatures from Indiana University.