Someone Could Mean Anyone 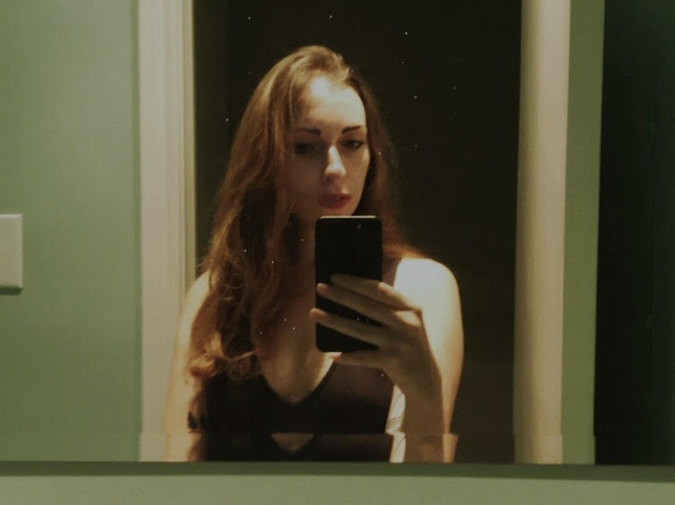 Last night I stood outside the party store in the rain while I waited for S to smoke a cigarette. He bought another half gallon of rum because he says nothing gets him drunk anymore.

I don’t mind the rain so much when I’m with S. Like me, S has a sad past that haunts him. He hates when this happens, so he texts me at 3 am, 4 am, sometimes 5 am, begging me to keep him company.

You can write from my apartment. I have good wifi, I promise. I won’t bother you. I just want to watch cartoons and sit next to someone. I don’t want to be alone, he says.

But someone is the key word I excavate from his request.

Someone could mean anyone.

There is nothing unique about me except that I listen. I’ve been surrounded by alcoholics my entire life. I know the ways in which their selfishness fuels their actions, demands attention at the most inconvenient times, the way it feels good to be needed by them, even if you know at the end you’ll probably be burned.

By the time I arrive at his small studio apartment, with its half empty paint cans outside on the porch steps next to empty PBR bottles and the neighborhood orange cat watching us from the shadows of S’s ‘94 Toyota Corolla in the driveway, I can tell he’s in one of his moods. He wants to get sober almost as much as he does not want to get sober and the contradiction is particularly bittersweet this evening.

S invites me in, acts as if we were already in mid-conversation, talking about growing up as a “mostly white” kid in Argentina, about selling drugs in El Paso, and about the addict he was as a teenager. He opens the bottle of cheap red wine I got at 7-11 before coming over and he pours us both a glass, filling up matching neon pink plastic cups that say “I LOVE Cancun!” S hands me my cup, continuing the flow of conversation without missing a beat. He tells me what it was like when his father would coach him on how to talk to tourists, how easy it was to sell himself to strangers, how proud he was when he’d come back with dope money for his dad.

I take a seat at the kitchen table, listening intently, surprised he still has the piece of furniture I helped him pick up off the side of the road when we were newly friends several springs ago after all the K College students moved out for the year and left their used Target furniture to rot in the Midwest sun or find a new home with thrifters and townies.

In the kitchen I notice something’s different. His usually tall and skinny-wire framed body now looks bloated, heavy in the middle, soft like a dumpling. I think of a text he sent me last summer that read, Dad bods. Have you heard? They’re in!

The frayed red and gold Ukrainian wallpaper adorning the room is peeling off and there’s an overflow of beer cans and empty wine bottles piling up in the bin next to the fridge along with a stack of unopened mail, books, and records piled up on the table. I hear the warmth in S’s voice as he talks about the past, the way his brown eyes become kinder, lighter as he reflects on moments of nostalgia, even though every story is just as fucked up as the last. Then I let him cook for me – as always, a big, ridiculous meal in the middle of the night, because that’s the only way he knows how to care for someone.

Tonight it’s stacks of chocolate chip pancakes, a sizzling pan of Polish sausage, lightly scrambled eggs with onion and green pepper, and a side of freshly made salsa verde and guacamole just for the hell of it. I watch specs of grease hit his knuckles and the front of his black and white Hellraiser t-shirt as he stands next to the stove moving from one mismatched pot and pan to the next, adjusting the flames for just the right temperature, flipping on cue, aligning everything to come out at just the right time.

As he hums to himself, moving in rhythm with the flow of the kitchen, I ask the last time he talked to his mom. Oh, you know how it is with family, I don’t really talk to any of those people anymore. What is there to say anyway? I take a sip of wine and nod. Yeah, I feel that.

And what about you? You ever talk to your mom after what she did to you? That was fucked up what you told me. He shakes his head. Leaving you like that, when you were just a little girl.

Still though, that’s fucked up.

I pause for a moment, feeling a lump forming in the back of my throat. I take another drink of wine. Anyway, I continue. Yeah, we talk. We went a few years without speaking but we’re close now…I guess…if you can say that.

Man, I don’t know. He shakes his head again, flips the sausage in the pan onto its other side. I couldn’t bring myself to be around those people ever again. I get it, though. I get it. That’s why we became friends, you know? Real sees real.

I nod in agreement. More wine. The sounds of the sausage crackling on the stove fills up the distance between us.

I think when it comes to family it’s about forgiveness, I say. Maybe. What do you think?

S considers my words for a moment as he takes the pan of scrambled eggs and sausage off the stove, collects the plate of pancakes, and sets everything on the table.

Forgiveness, eh? Yeah, maybe. I always thought of forgiveness as something only suckers had. But maybe you’re just a better person than me.

Looking around at the array of food together now he’s suddenly uninterested in eating. You need some rum? Some whiskey? I think I need something else, he says. This wine ain’t doing shit! He turns around, quickly grabbing two fifths off the top of the fridge. This definitely won’t be enough, he says. You should eat though. Also, where the fuck is the music!?

I eat a small plate of scrambled eggs, topping them with salsa verde and guacamole while S pulls out his iPhone and plugs it into the aux cord, queuing up a playlist he made of old salsa and merengue songs he grew up listening to with his father.

We dance for a little bit while drinking cups now filled with whiskey and rum. I laugh and I smile because I’m having fun and I think maybe he’s having fun too but there is something about all of this I know is just a facade, a way to keep himself distracted. He keeps it up, frantic almost, suggesting different activities we could do – video games, movies, watching reruns of our favorite shows. But it feels like it’s nearly 2 am now and I am weary and ready to call it a night.

He pleads for me to stay. At least until the sun comes up, he says.

I say yes to him, despite the fact I can envision the soft comforts of my bed at home, knowing my alarm is set for 7, and I’ll regret the lack of sleep later.

He asks if we can walk up to the party store because it’s actually only 1:30 and they haven’t closed yet. I say sure, that sounds good.

He says, even in the rain?

I say yes, even in the rain.

S smiles and hands me an oversized black hoodie to borrow. You know some people don’t know what a party store means? he asks as we head out. They think it’s like, you know, one of those places you buy balloons. But I’m like, no man, it’s where you go buy things to PARTY with.

I nod my head. Yeah, I think it’s just a Michigan thing. He likes that. He smiles. Yeah, it’s a fucking MICHIGAN thing! he yells out to a world that’s mostly asleep.

The walk to the store is short, quiet. Fat drops of sky land on our shoulders. We let the darkness of the night consume the space between us. He asks what I want to drink and I say nothing, I’m okay. Really? he asks, surprised. Yeah, I still have some wine left. I don’t need anything else. You’re a good girl, he murmurs.

After S gets the bottle of Castillo and smokes a fresh cigarette from his yellow pack of American Spirits we start walking back. Your house is closer than mine now, I think. Let’s just go there. It feels more like a home. I feel warm there, he tells me as he begins to drink from the bottle. I nod and say nothing. In unison, we turn our bodies left towards my house.

While we walk along broken sidewalks the smell of earth and decay linger between our steps. More sky falls and lands on our shoulders. We talk about movies and the last time we saw the stars in the desert sky and did you see that photo of the northern lights from last night on the news and can you believe it’s finally spring oh yeah, oh yeah, time is flying by.

We get back to my house and the half gallon of rum looks like it’s already about half way empty. I want to question his drinking, the circles under his eyes that look like they’ve taken up permanent residency, but instead I say nothing.

We go to the couch and he collapses immediately. He grabs my hand and closes his eyes, mumbles something in Spanish until he falls asleep. I grab a blanket off the back of the couch and gently lay it over him wondering the last time he felt fully rested. Deep in slumber I give him a soft kiss on his cheek before retiring to my bedroom, knowing he’ll be safe until the morning and will likely be gone before I wake. Changing from damp clothes into a warm, dry oversized Smashing Pumpkins t-shirt I pull the blinds down on my windows and double check the alarm on my phone is set before settling into bed. Tired but content, the sounds of the sparrows starting their dawn chorus outside in the distance soothe me to sleep.

Koty Neelis is a writer based in Austin, Texas but has lived all over—Michigan, West Texas, France, Chicago, LA, maybe someday the moon. Her work has been published in Autostraddle, No Cinema!, Vice, Dazed Magazine, and elsewhere. She is currently working on a novel. Find her on Twitter and Instagram @kotyneelis.