Some Kind of Memorial 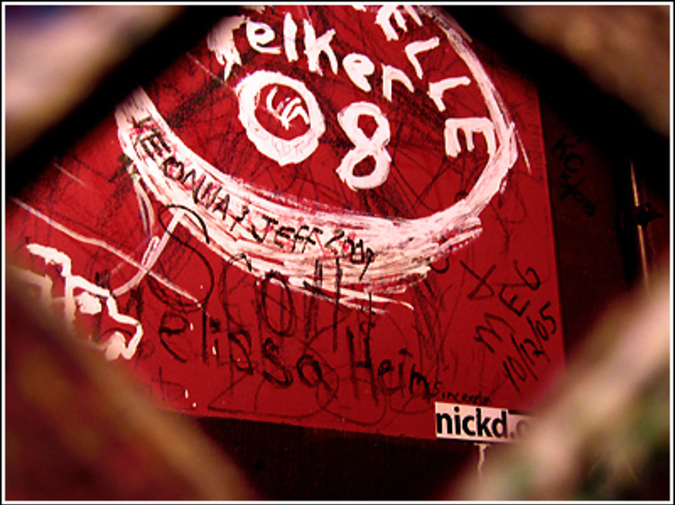 Georgia Ambler used to jog on Thursdays while Jake and I shot baskets in the drive. "You're outta shape, old man," Jake laughed, doubled over himself. Locking his hands to his knees, Jake spit something into the grass. Those days, we called each other names whether we missed the shot or not. Asshat. Shit bag. I could've called him any number of things. Told him his marriage had made him weak. Asked if it hurt when she tugged on his balls. Ever since the big day, he'd forgotten all about our early morning workouts. The real ones &mdash weights and fast laps. He gave them up. Traded them in. We shot baskets twice a week. I took what I could get.

On Thursdays, Georgia went for runs of her own, returning with a final lope down the long block, dragging herself in all that spandex. It looked like she was about two steps away from spilling out onto the sidewalk. It wasn't much to look at. She had some weight on her then, so I just focused on keeping my elbows in for the free throw. Jake usually met her half way down the block. One day she collapsed in his arms &mdash from the run I guessed &mdash and when she did, he kissed the life back in her.

I can't figure out when I got it in my head she was worth it. Those days she probably wasn't. She looked &mdash and even felt &mdash a little bloated. In high school, I would've fucked anything that walked. Back then Georgia just never came into the picture.

Most everyone was invited to their wedding. The starting five, the sixth man, even the guys who never played. We pinched together for a group shot like it'd been decades since we'd seen each other. We hadn't been out of school a year. Maybe we were just bored, but we loved giving Jake all the shit that we could. "What the fuck are you doing, man?" we cried. Georgia was looking better then. "You're only eighteen!"

Jake's cop-uncle was polite and said he couldn't make it when we knew he could. It was nice of him. He told Jake to be careful. We were. We opened the bar and drank discreetly in the KC Hall, in front of our parents like we'd finally become adults. In this place where our mothers and fathers pooled their money for our shared graduation bash. Where the Boosters had auctioned us off on dates — just the varsity. Where Jake, without fail, always brought in the most cash.

Georgia never did try to buy him. Maybe it's because she knew she could never afford it. I'd heard him tell her a couple times since then, "Listen, you won't need to afford anything anymore. You've got me."

It wasn't exactly true, but close. His parents weren't well off, and neither was her mom. None of our folks were. Jake worked his ass off that spring, pulling in what he could to get her a little diamond — a real one — and put money down on the hall. We knew how things were, so we pitched in where we could. When they played the dollar dance at the wedding I killed four or five singles just dancing with her, over and over. All I could say was how the dinner was great, her dress, her husband.

It all seems indistinguishable now. The weddings and graduations. Regional victories, sectional losses. I can't remember your girlfriend from his girlfriend from mine. They all end up looking alike, don't they? And now, I'm wondering: Who had the double-double in Pickneyville, and who was the assistant Junior Varsity coach? Things fall away. There are different kids on the auction block now. They're even selling our old jerseys. I bought my lucky number 4. Twenty bucks, but it's for a good cause. Jake was overseas then, but we knew he'd want his too. So we split it, Jimbo, Grapes, and me. We gave it to Georgia one night over at The Studebaker. She cried.

I got there early. Same fucking church they got married in. The lot was empty but I parked in back. I remember they'd packed the place for their wedding, so I eased the truck into one of the far spots and let the family and close friends fill in the rest.

It was a beautiful day. I'd been to a funeral a while back when it was raining and the minister said something about how it was appropriate, how God was crying. I wondered what that meant for Jake.

Inside, all the early arrivals were there like I expected: Georgia, her parents, his parents, basically all of the family within driving distance. And then me.

I never got that chance to explain, to confront his dead, disappointed eyes. The casket was closed. I hadn't expected that. I guess I figured an IED would be smarter somehow. It would go for the heart and lungs and leave the head intact. So instead of the real Jake, there was a photo of him propped up on the casket. The way he was supposed to look — intact — smiling like the goofy young punk that he was. He wore dull fatigues and was framed by himself. No wife or parents to crop out. Georgia sat by some flowers. By the way she was crying, I can tell you with absolute certainty that I'm the one she wants dead.

Jake's gone. What does he have left to carry? Georgia and me, we're still stuck with the memories of our bare selves together, and somewhere mixed in, the bare images we have of him — bedroom or after-practice showers. He bled out into a desert in a country I couldn't point out on a map. And we were there on his couch pouring ourselves into each other because of it. Because that was our grief. Now we're left shouldering the load. The only hard thing he ever had to do was die.

Georgia established a memorial of some kind in his honor. Got his name in the gymnasium and framed the jersey we bought for her. But it's not his jersey or the sectional championship banners that keep me away. It's not her face, either; she doesn't miss a single game. It's the clash of the brass in the pep band that keeps me away. It's Mr. Feyer leading the band, smashing his cymbals at random. It's the trombones and tubas. The shrill officials' whistles. The substitution horn. The sharp squeak of a shoe and the clock meting backward. These sounds hang heavy in the air beneath the vaulted ceilings. They're there and then they're gone.

B.J. Hollars is an MFA candidate at the University of Alabama where he's served as nonfiction editor and assistant fiction editor forBlack Warrior Review. He is also the editor of You Must Be This Tall To Ride forthcoming by Writer's Digest Books in May 2009. He's published or has work forthcoming in Barrelhouse, Mid-American Review, DIAGRAM, Fugue, The Bellingham Review, among others.

Brendan Todt is a 2006 graduate of Knox College. If all goes well, by the time of this publication, he will have married his beautiful fiance, moved to sunny South Carolina, and been gainfully employed there. His poems have appeared in After Hours and Beeswax Magazine.