So We Bought A Hearse 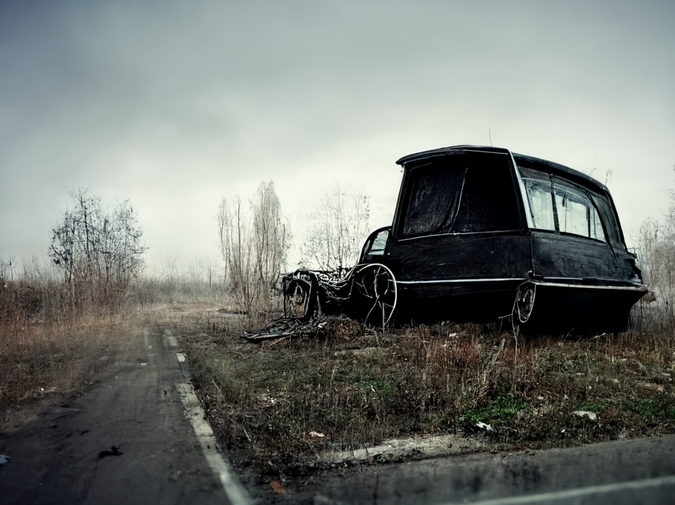 So we bought a hearse. Our pooled $800 included what Chip could steal from his musclebound stepmom – the roller-derby training - and we showed up at the designated spot with wads of crumpled bills like green loofas. Ruben smelled like ass that summer, and we stood around in the beating sun as his ass-odor wafted in waves. The guy from the Craigslist post drove into the parking lot, the rusted chassis banging like hell on potholes. It looked like some freak animal – platypus or anteater or pufferfish. The name “Ricky” was stenciled on the side, but the seller’s name was Alfonse and he didn’t give a shit what we did with it. It was so perfect we forgot to haggle.

We only ended up driving to three places, and one of them was Arby’s, before it stranded us on the shoulder, engine smoking. Chip and I looked for an owner’s manual while Ruben snored in the coffin-slot - after Albuquerque we didn’t let him sit up front. We told him to talk to us after a shower.

It ended up being money well spent by my count - Ricky had gotten us within spitting distance of Gila National Forest. Chip complained that we were 100 miles from cell service and were probably going to die out here and if we didn’t his stepmom would murder us scrum-fashion anyway and how, how in lord jesus’s name would we get home? Chip was making some excellent points here, but I countered that we had 25 French Dips and a handle of bad vodka and wasn’t he thinking of rugby, not roller-derby? And the sky would be so dark tonight that we would see first the Milky Way and then, later, a waxing gibbous, and he was welcome to view my waxing gibbous anytime. And maybe we could get drunk enough to curl up next to Ruben and not mind the odor. Maybe we could get so drunk that stars and comets and planets would wheel and crash all around us. Chip said he liked the getting drunk part, so we did that next, and soon we were staggering up one of those mesas looking over the rolling desert. Down there, Ruben was belching and giggling inside the hearse, and the hearse was smoking and giggling outside of Ruben, and Chip put his arm around me, and I put my arm around him, and we swayed and the moon swayed as if everything was about to give way to something best-yet.

“Don’t you see, don’t you see!” Chip repeated. “What?” I said. But he just kept saying it. Then I did see – across the desert, little lights were twinkling and fading like fireflies. I rubbed the vodka out of my eyes, but it was still there. As lovely a little city as you might hope for. “What is it, Chip?” and for a moment I was afraid, but he shook me roughly and laughed like a fucking maniac. “We’re already home!”

Robert Herbst is a writer and violinist based in Chicago. His work has been published or it forthcoming at HAD, The Offing, Scoundrel Time, New World Writing, and others. He is a member of the Civic Orchestra of Chicago, and he enjoys the company of his dog, Reba, who is a very good girl. You can read more fiction at robbieherbst.com and some dumb jokes on twitter @rickarob.