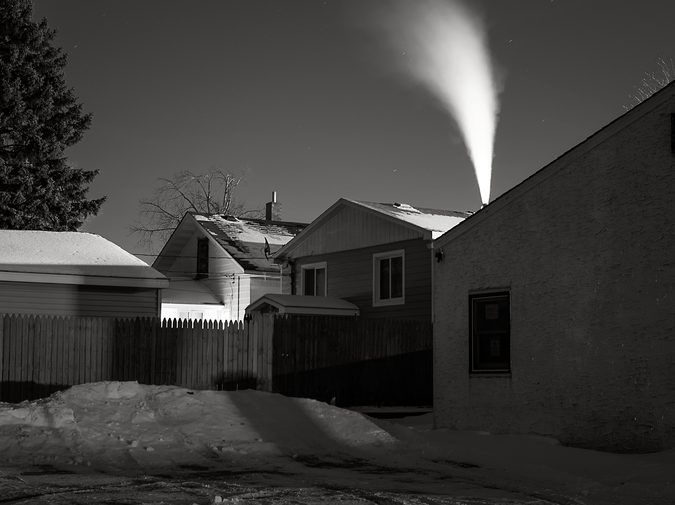 The hottest day of summer so far falls on a Sunday. My boyfriend and I get groceries: fixings for burrito night, hummus, swiss cheese, micro greens and pita bread, soy milk and coffee, cereal, apples, bananas; that sort of thing. When we get home I put the food away.

“Thank you,” Dominic says, then goes to the bedroom.

I open the fridge and the cool air falls on my feet. It feels good to sit in front of the cool air of the fridge. My dad died when I was twenty-eight. Now I’m thirty-one. It doesn’t feel like three years. Some days it feels like more time has passed. Other days it feels like yesterday. I’m not sure how it feels today. Dominic’s dad is still alive, but his parents divorced when he was ten.

When I’m done putting away food I go to the bedroom too. The blinds are drawn and there he is, Dominic, naked on his back in bed, the fan whirring away. My younger brother washed our dad’s body. I wonder what it must have been like, but I have never asked. I never saw my dad without clothes on.

“What are you doing?” I ask Dominic.

“It’s too hot for clothes.”

Dominic is hairy, but not too hairy. His chest is broad, and he has a small pouch of a tummy. I strip down to my underwear and join him side by side on the bed. Where our shoulders, arms and legs touch it is too warm and I can feel our skin beginning to stick. The fan blows hot air over us, and this is how I fall into a light sleep next to him. When I wake, Dominic is not next to me anymore. The air blown by the fan has not cooled, and I am reminded of the desert. I can hear the shower running from the bathroom. In the final wash of his body, camphor was used. I tried to comfort my mom during those days, but it was impossible. Mainly she just argued with me until I got so exhausted I couldn’t speak. The shower is off now, and pretty soon Dominic comes out of the bathroom with a towel wrapped around his waist. It is white. I think of how my younger brother must have dried off the body. I think of my dad’s shroud.

“Is that the last towel?”

I wait for him to finish that thought but he doesn’t. I get up, and Dominic takes his towel off and hands it to me. I go to the bathroom. I turn on the hot water, then slowly let it run cooler until it is cold and the air comes out of my chest with a shiver. I use soap, and then rinse. When I come back out, Dominic is back on the bed on his stomach, his eyes shut tight and his face in a grimace like he’s having a bad dream or like he’s trying to fight off sleep.

“I probably should,” he says and then rolls onto his stomach.

I touch his back and it is warm and damp. “We’ll have to wash the sheets.”

“I love watching you get dressed.”

“More than you love watching me undress?”

“Let’s take turns riding the skateboard there,” I say.

I put on my shoes, and he puts on flip-flops. “Aren’t you gonna ride?”

It’s like he deliberately tries not to have fun. Outside the air is still and hot. I drop the board and pump, pump my leg and then put both feet on the deck. The wheels are big and green and the trucks are low to the ground. The deck bows in the middle, but the ride is smooth, like I’m suspended a few inches above the pavement, floating on air. The brush of the wind feels good on my legs, face, and shoulders. I’m a half block ahead of Dominic at Telegraph when I stop and turn around. I can see him smiling from here.

“I wanna try,” he says when he catches up.

I get off the board and nudge it toward him. He picks it up, turns it around, and gets on. He pumps his leg once, twice then gets both legs on the deck in a fluid motion. He rides to the end of the block where he stops and waits for me. He’s smiling when I get there.

“We should bomb pill hill.”

“After I get my prescriptions.”

When we get to Walgreen’s I wait outside for him. I kind of like how hot and still everything is out here. The light Sunday traffic seems to float past, up and down Telegraph. Dominic is back out in five minutes.

“You get everything you need?”

“One more thing,” he says, then leans in and kisses me on the cheek.

We head back a different way so Dominic can ride pill hill. He gets on the board and rolls ahead quickly. “Careful,” I say, but I can tell he’s happy and so it makes me happy.

“Shit,” he says, turning around. “I forgot to do my mood chart this morning.”

“It’s just that I should do it in the morning because that’s when I do it.”

I catch up to him and take over. I push myself slowly on the board along side of him. Now we are climbing pill hill—it is a steady and gentle slope on both sides, and green trees line the sidewalk. On Sundays the street that bisects the hill is empty, perfect for my skateboard. At the top of the hill is an old wing of the hospital and on top of it is a giant white cross.

“My best friend growing up,” Dominic says, “Me and him used to play—have you ever heard of Skate Or Die? After my parents divorced we used to play that video game until our eyeballs fell out.”

“Aweseome,” I say, but I can’t ever tell if he’s happy or sad when he’s talking about the past. I mean, it doesn’t have to be one or the other I guess. “I’ll keep going down to the bottom and you wait until I’m there and then you can go. I’ll record you on my phone.”

“You go,” I say. So I walk down and think of my dad the whole way, how he lay in the hospital bed. He’d lost so much weight. His face was a pale mask. I could barely find him in it. When I’m close to the bottom, I get into the middle of the street, turn and wave. “Ready!”

I hear the rolling of the wheels and Dominic’s getting bigger and bigger. I have my phone fixed on him, and he has a look of deep concentration and he’s picking up speed as he gets closer, closer.

“Skater die!” He shouts as he passes me and his face of deep concentration has transformed into one of childlike joy. He sails past me and I feel the whoosh of air that comes with him cut through the still, hot afternoon—it is a brief moment—and I track him with my phone until the very bottom where he slows himself down and he raises his arms and pumps his fists in victory. I don’t notice that he forgot to give me his prescriptions to hold until now and the three bags are flopping around in his right hand above his head.

The whole way home he talks about how fun that was and how good it felt to feel the wind on his face and against his ears.

In the middle of the night our apartment rattles and shakes me out of a dream of my dad. He is shaking me with frightened eyes and I am pleading with him, and then I am awake, and the apartment’s movement has stopped. I touch Dominic’s back. It is cool and dry, and he is still asleep.

“Dominic,” I say. “There was an earthquake.”

“We are fine,” I say, and take his head into the crook of my neck where it feels safe and everything feels close, and I remember him bombing pill hill and yelling skater die! just like that, skater die.

Joel Tomfohr has an MA in English with an emphasis in Creative Writing from the University of Nebraska-Lincoln, and an MFA from Mills College in Oakland, CA. He has held residencies at the Vermont Studio Center in Johnson, Vermont (2013), The Cultural Center in New York Mills, Minnesota (2014), and the Headlands Center for the Arts (2014-2015). Most recently, he was the Emerging Writer in Residence at the Wellstone Center in the Redwoods in Soquel, CA. His fiction has appeared in 580 Split, sPARKLE & bLINK, and Your Impossible Voice.