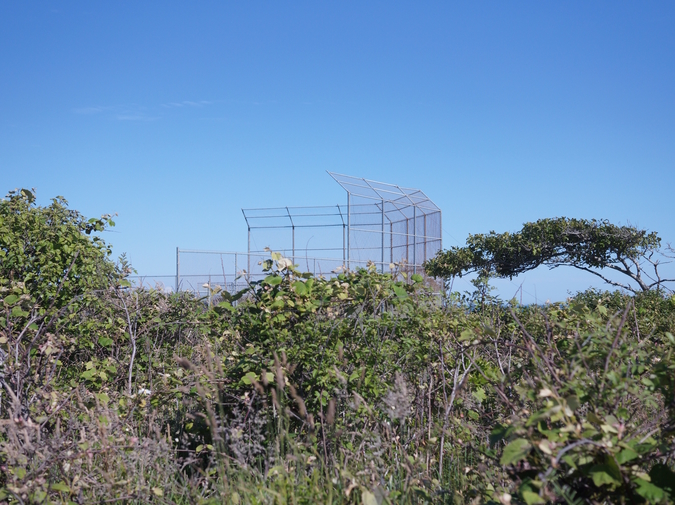 She grips the bat the proper way, the way Dad taught her. Right over left, the knuckles lined up like railroad tracks or piano keys, two of Dad’s many analogies thought up on the fly. Yet another: imagine holding a bird. Grip too hard you squash it, too loose it flies away. She has been known to get lost in the piano and the birds, in his many metaphors.

She doesn’t choke up on the bat. She is now fourteen. She’s a big girl.

She is quite small. Compared to girls who are good at sports, the athletic girls, she is very small. At her last physical, the nurse bumped her up. Four-eleven and…call it five even (play-by-play). She seems even smaller—she plays small (color commentary)—because she walks with a hunch. She leans forward, cranes her neck, to make up for the poor eyesight. It has become a habit, but such things have hardened to physical deformities. Zach Stefano, that six-foot-four bassoonist, walks with his shoulders rolled in, practically tucked under his chin. He intrigues her. She talks to him twice a week after orchestra. When they pass in the hallway, she waves rather, for her, exaggeratedly. In return he does a limp-wristed thing. She has not decided how she really feels about him, whether he is crush material or merely intriguing. She mimics his hunch.

She gets the grip right and not much else. This after all is only gym, she after all is small and, by most accounts, shy. She plays the viola, and not well. She has one good friend who has many good friends. Her hair is treated to two daily cycles: wash, towel dry.

Dr. Palmer, standing behind home plate, gave her the smaller bat. The double-wall DeMarini is an easy bat for her. He had given it to all the boys and the athletic girls, but tossed it aside as she walked up. Instead she was handed a stunted tee-ball bat.

She takes no practice swings. She doesn’t stretch her shoulders or back, the signature portion of her pre-at-bat routine. Once in the box, her knees aren’t soft, her neck sticks out, and the bat rests on her shoulder. No wonder she misses wildly on the first pitch, a slowpitch.

Dr. Palmer tells the boy on the mound to get closer, as if that was the problem and is now the solution. The boy obliges with two giant steps, but not before groaning, That was puurr—fect.

The second pitch comes. She tracks its slow parabolic path. She is accustomed to fast balls, darts intent on transfixing. Slowpitch is for men Dad’s age, perhaps older, for men who bumble about chasing sac flies, men bent on recreation. She, however, has plans in the majors. The pitch has no shot staying over the plate, well outside, a no-brainer to lay off. She steps out. Oh, soooo puuurr—fect. She wonders why the boy groans.

Without calling time Dr. Palmer jogs over to the mound. Inexplicably yet assuredly a man-boy on first also starts toward the mound, but Dr. Palmer quickly waves him off. He gives the pitcher boy a smart ruffle on the head and sends him to squat behind home plate. The boy, sensing the demotion, groans some more. Meanwhile she scurries over to the DeMarini leaning against the backstop, grabs it, and tosses the tee-ball stick. Dr. Palmer has decided to take over on the mound, except he isn’t on it. He stands close to the batter. He takes no caution.

The DeMarini feels right in her hands. She only wishes for her worn batting gloves. She spits into her palms for tack. A languid practice swing tells her that it has plenty of plow-through, easy power. She takes another swing, hard and fast, just to hear the whoosh. Back in the batter’s box, two taps on the home plate, she assumes an aggressive stance: knees bent, shoulders turned, hands relaxed as if holding a bird.

Dr. Palmer’s slowpitch comes in a bit high, still hittable. She considers giving it a rip. But she has been taught to play the game the right way. Only one way the pitcher beats you—three perfect pitches. But a million ways to beat yourself, chasing a pitch the first of those million ways. No clock in baseball. Come with your brown bag of PB&J, banana, and frozen pouch of Capri-Sun for nine innings, extra innings, double-, triple-header, muddy infield or hot bright sun. What you have in baseball is all day. Wait all day if need be for the ball you want to hit. The good batter lives to see another pitch.

She snags Dr. Palmer’s high ball with her hand. She is used to doing this with Dad’s fastball. She sidearms it back with velocity, returns it with compounding interest, some zip of dijon mustard on it.

One summer she and Dad drove down I-71 to see the Reds—the 1990 Cincinnati Reds!—play the struggling Braves who, for the simple fact of being in the same division, still had to be dealt with competitive respect. She kept on the mitt the whole drive from Columbus. Hers was a new love for baseball, a new love that had yet to understand the game’s intricacies and fatal traps. Dad lectured on the virtue of single up the middle. Aim for the 4-5 hole between second and shortstop, the softest gap in the ballpark. Get by the pitcher and you got a base hit. The power hitter thinks fences; the smart hitter, single up the middle. It gets you on base, which scores runs, the foundation of small ball.

They arrived two hours early to scour for free street parking. She didn’t ask, but Dad bought a Major-League cup of Coca-Cola and All-Star bag of popcorn, stadium food coming in sizes of Minor League, Major League, and All Star. He topped the popcorn with three pumps of clarified butter at the condiment stand. She insisted on carrying the Coca-Cola in the mitted hand and the popcorn tucked in the other arm. She found Section 123, Row 34, Seats 4 and 5, whose vantage offered a clean sightline to the action at third base, then stretched out to the astroturf, its color the pine green of the Alps. There they sat alone, together, a speck among the empty blue seats. He talked baseball, she talked baseball back. The ballpark organist warmed up her fingers with liturgical Bach.

Seeing Barry Larkin walk on for batting practice, she left the popcorn, Coca-Cola, and Dad, and ran to the front row. Barry Larkin had his cap on backwards, a move she would copy the very next day. To begin he laid down soft bunts. He’s feeling the ball. Dad, of course, had followed. Barry began opening up his hips and shoulders, stepping into the ball, getting short in his stance, taking bigger cuts. He gashed the field with one line drive after another. His swings came in quick, graceful succession, but the moment of contact was violent and gave her a little jolt. You see where he’s hitting?

She doesn’t hit weak grounders or dinky bloopers that barely clear the infield. Her balls are hard straight up the gut. Pitchers duck. They had better.

Her days are planned around baseball. She finishes homework first thing after school. Then she practices the D major scale on the viola. She races through it, ignoring the ticks and tocks of the metronome, even though her teacher had instructed her to play it slowly with the metronome; she wants everything played slowly and with the metronome. She stops when she hears Dad’s green Nissan in the driveway. He stays in the car, as he is wont to do, for some time, the car in idle, its engine grumbling, with frequent lurching hiccups. She wonders what he does in the car, but she knows he in fact sits there doing nothing. She plays the opening of a Telemann before he comes in.

Dr. Palmer winds back for a lob. She will hit a single up the middle. She will hit with such force that the black smudge of the DeMarini will be left on the ball’s supple white leather. Its red seam-threads might fray. The kid out center won’t field it even after two bounces, opting instead to get the hell out of the way. She aims for Dr. Palmer’s nutsack, for he stands in the way of a single up the middle.

Jon Lee-Casco lives in St. Louis with his wife and son.  A righty, he once batted left in rec league softball in homage to Ken Griffey Jr.