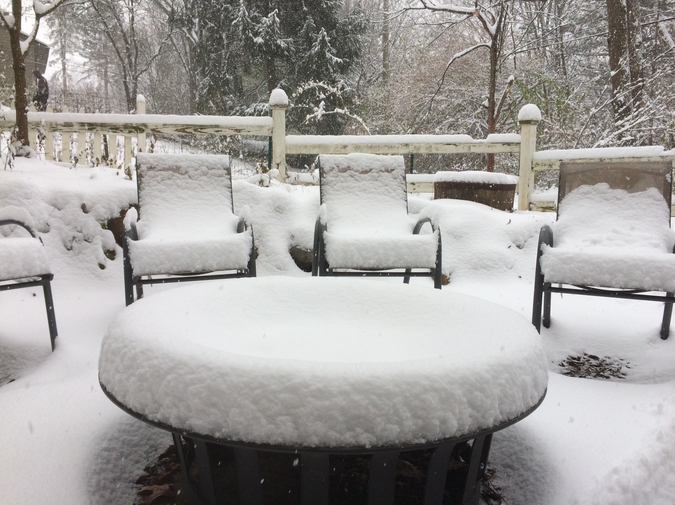 You think that winter is a thing you can hide from under clothes and down coats, inside warm houses, next to fireplaces and eating tomato soup with crackers after you come in from the cold. But sometimes you can’t keep it out and sometimes it goes on so long that it wears everything down, finds a way into every place and piece of skin you thought you had covered. Sometimes winter is the whole fucking world.

Like the winter after my parents separated and Dad quit teaching at the university and both of them moved out of the nice house on Transylvania Park and into other places that were probably a bad idea. Dad moved into an ancient cabin on a horse farm that he was supposed to be half fixing it up (even though he had no idea how) and half being a sort of writer-in-residence. Everyone warned my Dad about us spending time with the half-wild herd of brood mares or on top of the back roof. By the end of summer, I knew all of the horses by name: Tara Blue, the leader, always running out front; Double Guns, the wildest; People’s Parties who’d had so many foals for the farm that her knees were swollen huge and she was always lagging behind. I knew when there were new horses in the herd. We could see a lot of the farm from that back roof, all of those fields rolling green away from us, the black barns that could have been parking lots or ships.

But summer was no warning or even a hint of how hard winter could hit and we had only ever lived in houses that huddled together for warmth, insulated and kept. At first it was snow days and finally getting a break from the stupid school we had to go to now that Mom had moved to the middle of nowhere too. Then, after the mountains of snow, the cold hardened all of it into cement-hard ice. It was too dangerous to go outside for more than a few minutes, and putting on all those clothes (three layers of socks, two sweaters, a down coat and scarf and hat until we could barely move) just for a few minutes got to be too much work. In the house the cold had driven us from all the rest of the house until we lived in one room around that wood stove, reading, watching TV, listening to music, arguing until we couldn’t stand the sight of each other. So we explored the rest of the house like it was new arctic territory with coats and hats on. We could see our breath in the bedrooms, our unmade beds and abandoned dressers like a ghost town. The kitchen we used only when we had to. Same with the bathroom. I don’t remember if the pipes froze, but they did in the farmhouse where Mom was living and we ended up shitting in a bucket that had to be emptied on the frozen drifts outside.

We were supposed to go back to Mom’s house, which wasn’t really her house, but where she was staying now. We had already been at Dad’s too long because of the snow and we were dressed in too many clothes with our backpacks by the door waiting for Dad to come and tell us that the car was warmed up and we could go, but he hadn’t and we could hear him yelling even through all that cloudy plastic taped over the windows and the blankets on top of that.

My brother looked at me then out to the small barn where Dad had put the car to protect it from the cold and he charged out the front door like Dad was in trouble and we could actually do anything about it if he was.

When I got there, wheezing from the air that burned all the way down, Dad was on his knees just inside the barn door where it was darkest, his head hanging down, leather gloves sticking out of his pocket like a lolling tongue. The car and all the cows from the pasture were crammed into that small building that was really more of an oversized, falling-down shed than a barn. Frozen cow shit covered the light blue paint on his old Toyota, the windows and even the tires, like the car had been driven through it. Dad called his car ‘Powder Blue’ as if it was some kind of special car that deserved a name, but it was just an old two door Toyota that creaked when you opened and shut the doors. Powder Blue got bit and kicked when it stalled on Dad, which it did frequently. Now Powder Blue was covered in greenish brown shit and straw, the cows’ breath fogging the interior of the barn, covering the car in a slick layer of ruminant ice. The sunlight reflected off all of that white and the clear cold sky outside made the place look haunted. A ghostly cloud of mist and dust and breath floated in the air around us.

Now Dad would have to drive us to Mom’s in the shit-mobile, which probably wouldn’t start even if he could get the car doors open. Cows were standing pinned between the car and the wall and the doors had been frozen shut since the storm even without all the extra ice and frozen manure. Dad had tried pouring boiling water over the handles days ago, but the doors only worked while the handle was still too hot then froze solid again, worse than before. He’d carefully wrapped the battery in a blanket too, which I could see sticking out of the hood like a scarf badly tucked in, but it probably was frozen too.

Dad yelled again, his arms flailing like he was drowning, but the cows didn’t move or even act like they’d heard. They looked like they were already frozen just like the world outside. Like the donkeys in the field near us that had all starved to death in the cold. Dad and one of the field hands had taken some hay to them when the worst of the storms had passed, but the cold was too much, the hay too late. There weren’t enough trees in the fields for shelter and the thoroughbreds had all been taken to the barns. Dad said he could hear the crunch of his eyes every time he blinked because his tears were freezing it was so cold and those poor damn donkeys were fucked from the get-go.

There were hay bales on the ground outside for these cows, but they had obviously chosen the shelter of the barn over food. The only time I’d seen my parents fight was about Dad wanting to keep us with him full-time and visit with her. I didn’t want to see them fight again, but it wasn’t like there was anything Dad could do about the weather, this cold that had frozen everything.

But somehow Dad’s ex-girlfriend had managed to get out with all of her stuff. Probably another one of Dad’s old students helped her, loading her stuff into some old car left running so it wouldn’t die in the cold. I listened to Dad plead with her on the phone when he thought I was asleep. It was hard to remember that he was my Dad talking like that. He sounded like someone on TV. Someone not quite real or even more real the way TV characters are fake but also more like people than people are.

“Please,” he said and it sounded just like him on the phone only he was talking to the cows now, but they just shifted their hooves or stood there staring. Their big soft eyes were somehow still liquid when everything else was frozen into rock.

My brother started making fake karate noises at the cows and slashing and kicking the air like he was going to hurt them, but they didn’t even move. He was making everything worse as usual. That was his gift. He either made everything so much better, got everybody laughing and smiling, or he made it a million times worse and uncomfortable, no in-between. And he had no clue when it was one or the other so he kept going even when it was just a wreck, thinking he was eventually going to make it change states. But if I’d learned anything in the past year since their divorce, once it’s gone bad, it’s almost impossible to turn it around. The problem was that I could always see all the ways it could go bad so I didn’t even try, which is already its own kind of wreck. I always thought about that book A Wrinkle In Time, how they’d crossed the universe to rescue their Dad, but I couldn’t even tell where he’d gone and there were no witches, no one to even give us a hint.

Instead, I stared at those cows and felt my toes going numb, my fingers tingling, my nose burning and running and I imagined how cold those cows must be out here in this shed you could see the light shining through in wide lines and circles on the gravel floor. I thought about how everything just seemed to get colder and harder even when you did everything right or at least didn’t do anything wrong. I turned away from Dad and dragged and kicked as much of a hay bail as I could into the sunniest place outside the shed so maybe it would thaw enough to make them feel like eating, so maybe even if they didn’t leave the barn they wouldn’t starve to death like the donkeys. Dad still knelt there with his back to the open door, tears freezing in his beard watching the cows and my brother like he wasn’t even seeing them so I went back to the house to call Mom and tell her we were stuck and wouldn’t
be there for a while.

Melissa Moorer's work has been published in luminous journals such as Electric Literature, Hobart, The Offing , Fireside Fiction, FLAPPERHOUSE, Vestal Review. She was Assistant-Editor at The Butter/The Toast where she wrote "This Writer's On Fire" for Roxane Gay.