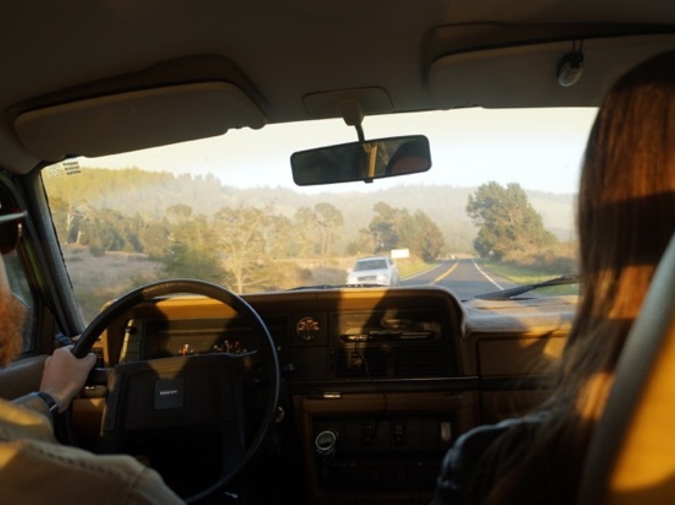 Obviously the place is unsafe – it’s an unused, unusable warehouse, its viscera cleanly removed, its walls torn off in ragged sections as if eaten – but it’s a large expanse of flat concrete out of the sun, so the boys go there to skateboard. Usually, Dylan’s older brother crams all five of them into his dusty blue Corolla in exchange for weed or gas money, because moms do not need to know about the warehouse, and they roll away the long dog days after school out here, surrounded by loose desert and abandoned equipment, the wind stirring sand into their hair. Yesterday, Dylan’s brother brought his girlfriend along in the passenger seat when he came to pick them up, so Ray and Colin got left behind.

Ray’d been holding out on them, weed-wise, and he and Colin got high and babbled about the nature of the universe for a while. Then they came down and got hungry and pieced together that Dylan’s brother wasn’t coming back for them.

“I can call my sister,” Colin offered.

“Her best friend’s sixteen. She has a car.”

Ray said “Don’t you ever,” and stopped.

Ray lives with his father on a long dead-end street. The brick-red paint on their house has been stripped off in brushing arcs by the windblown grit from neighboring vacant lots. Colin lives with his parents, his twin sister, and his baby brother in a cul-de-sac near the Springdale 16 movie theater, the one with IMAX.

Colin spread his left hand out over the ground. Shadow-fingers stretched long. The light gilded the concrete and brought out the vermilion in the rusty, half-eaten walls of the warehouse.

“It’s not that late,” said Ray. His skateboard lay wheels-up on the hardpack. It depicted a skull that had been broken into fragments and reassembled. Blood glowed in all the crevices.

Colin got out his phone. “Imma call my sister,” he said.

Ray got up. “Whatever,” he said. “I’m walking.” He lifted his shipwrecked board and set off down the road, kicking at the gravel.

“Wait, what?” said Colin, but Ray didn’t look back.

Colin had lied and told Tasha that Ray wasn’t into girls, but then the Samantha Watkins thing got all over school. He told her that Ray didn’t like animals, which would have broken the deal for sure, but then Ray spent half of his first visit to their house playing with Dino in the yard. He told her that Ray was really boring when you got to know him, but she just laughed. All this, and more, because he couldn’t tell Tasha the real reasons he wanted her to stop crushing on Ray. None of it stopped her from hanging around and asking Ray about bands he liked and even texting him occasionally, even though Colin told her (not lying, this time) that Ray’s plan charged per text and he was always bitching about that, his dad on his back about the expense, and reminding them all not to text him, to call him instead, like an old person.

“Silvercrest,” said Colin and Tasha together.

“We didn’t see him on the way here,” said Tasha.

The police found him sometime in the middle of the night. He’d tried skating on a downhill section of hardpack, but his board had hit a rock and he’d fallen badly and broken his right ankle and couldn’t walk, so he tried to wad himself up onto the board and roll along like a legless man but he’d slipped on a hill leading into one of the abandoned building sites that surrounded their warehouse like enormous moons around a small, sheltered planet, and he’d tumbled ass over teakettle down and into a terrible pit dug for a long-forgotten foundation with a rocky bottom full of small dead creatures who got in and couldn’t get out; a half-rotted dog was in there and Ray’s hand sank into its putrid chest first thing when he tried to stand and he shrieked and dropped down again and he lay there half the night, his ankle full of ground glass, sweating and shivering in a thin TAPOUT t-shirt, shouting himself hoarse when he saw headlights, and they got him to the hospital and gave him blankets and sips of water and x-rays and codeine, and his dad didn’t come to pick him up at all, in fact hung up on Sergeant Kleinman when she called to say how his son had passed the night.

So it was Colin’s mom who came. Colin’s mom had listened, after dinner, when he told about Ray and him getting left behind, and Ray walking off on his own. Worry had broken his part of the pact about their warehouse. Her lips went thin and white and terrifying, but she just got up and called the police and told Colin to go do his homework.

Tasha was sitting in his desk chair. “Do you think Ray’s all right?”

“Get outta my room, derpy.”

“Do you think he’s gonna get home okay?”

It turned out that Ray hadn’t even headed for Silvercrest Drive. He’d gone in the other direction, toward Dylan’s house. Dylan lived on a ranch way out of town. There was a barn, kept warm at night for the horses.

“I’m glad you told Mom.” She peeled half a nail’s worth of rust-colored polish off her thumb. “Is she gonna kill you?”

“Get out of my room,” he repeated.

He did his homework and went to bed, and in the morning, there was Ray, sleeping soundless in the other twin bed in his room. Gingko branches whispered against the bedroom window in the breeze. He stared at Ray’s curly head. What did that feel like, what Samantha did under the bleachers, he asked himself, or Ray’s sleeping ears, or whoever was listening. What did that feel like, a girl’s mouth there. Why did she do that for him. Why not me. Why not me.

Katharine Coldiron's work has appeared in the Southern California Review, the Normal School, Monkeybicycle, and elsewhere. She lives in California and blogs at The Fictator (fictator.blogspot.com).