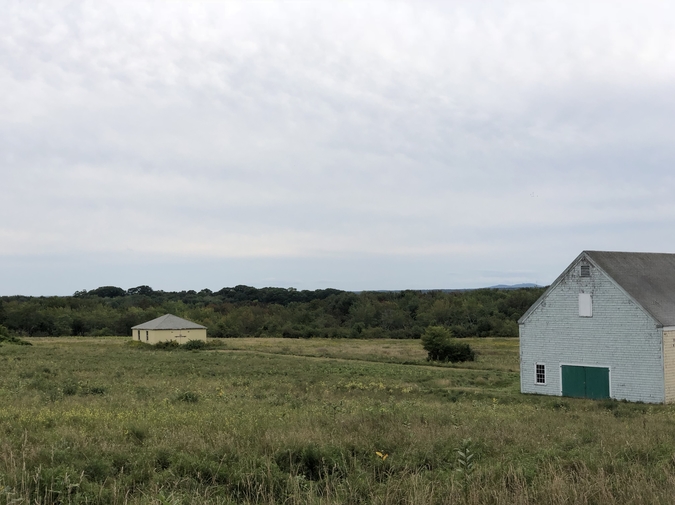 I’m driving a rental through the potato fields of South-Central Wisconsin, trying to remember the exact location of my mother’s grave. Harvesters on both sides: metal insect hulks crawling. At an intersection, dimly familiar, I turn left. More potato fields. I recognize nothing. I mistake, for a moment, flurries for lint. Flummoxed, I pull into an A&W. Inside, no customers, no music. From the back, fryer baskets crackle. I order cheese curds; curly fries; a Pepsi, extra ice. I sit down, breathe. The russet tabletops soothe me, their low-level warm horizon. A stillness expands. The stillness snaps: a Packers green-gold knit cap shoots up from underneath a swivel stool. The cap is worn by a boy (five, maybe six), no sign of his keepers. On his feet, one green-gold galosh, the other galosh missing. He stares me down—saucer-eyed, silent—then his mission calls him back. He’s climbing over/under every table, searching high and low, landscape of Formica and hamburger wraps.

Another visit to Wisconsin. Years earlier or years later? One of those. Maybe neither. Maybe the same trip. The nursing-home cat keeps sneaking into my grandmother’s room. I see the cat. A nurse sees the cat. We look at each other, never say a word. Happens again and again. Cat as harbinger, cat on a death-watch. I dream up a peer-reviewed paper. Something about a metric for legends. Their hold on us measured by per capita silence units produced.

One outlier for the metric: Patricia. (To every new visitor every time: "I’m not a nurse, but I do everything else. How can I help you?") I’m walking toward the nursing-home entrance and Patricia is walking out, carrying a plastic-potted, foot-high brown stalk toward a dumpster by the side of the building. The cat zips by, a blur, almost trips Patricia, then disappears into the lobby just before the door swings shut. We’ve both stopped. Eye contact. Wordless. But Patricia, who does everything else, does something more again: “Clara’s great. Lots of love for that lady in this place.” Zero units of performative, knowing dread in her voice. Just a workaday truth: my grandmother, loved.

Several days later, I’m surprised to see the potted stalk on the reception desk. "You kept it," I say. Patricia, briefly looking up from a stack of purchase orders: “Won’t quit till I find what it needs. This week it’s more light, less water.”

At some point during the boy’s second tour around the A&W, I begin to wonder if he’s searching at all. Maybe he’s just having fun climbing over/under russet tabletops. Maybe I’ve invented a mission, but there is no mission. I’m sitting with this thought when in walks a woman, 30ish. Her bottom lip is swollen, some blood on it. She’s coatless. Sweatpants. A T-shirt with a slogan that I no longer remember. But I do remember how the letters of the slogan looked: metallic and sparkly, flecks of them missing. The woman grabs for the boy. He wriggles, escapes, becomes a boulder on the floor. "Get up," she says. "He’s looking for us."

The boy remains rigid, keeps staring down into the center of the earth. She scoops him up. He’s kicking, screaming. They’re out the door, out of view. I’m still sitting at a table; then I’m not. I’m outside in the parking lot. I’m looking for her car. Then up ahead, by the side of the road: Packers green and gold. One galosh bouncing as the woman carries the boy toward who knows where. I can see only the boy’s arms and his legs. It’s as if the woman’s back has grown an extra set of limbs. Around them: nothing and no one and farmland for miles. I take one step; I hesitate. Soon it’s too late. A pick-up slows beside the boy and the woman. There’s a man inside the truck. He shouts something I can’t make out. The woman keeps walking. The man shouts again. She stops, looks at him, says nothing, climbs inside with the boy. The truck drives on.

My grandmother keeps breathing, keeps touching my hand, keeps finding her glasses every morning, keeps pressing the button on the top of her talking clock, and then, one-by-one—my grandmother, me, the nurses, the other residents—we all first note privately the creature’s absence. Before long, it’s general knowledge, a news item on daily repeat: the cat has run away. No one can find it. Though I don’t think anyone much looked. Farm country rule: cats show up or they don’t. You let them live their own lives.

Another outlier. Partial outlier. Patricia sets out a bowl of food every morning for the cat. Clears the bowl away every night. "Raccoons," she says. "Skunks." Did the cat have a name? I think I remember specifically that the cat did not have a name. Which, I suppose, could be some other type of metric, though I’m not sure what it would measure: when you let a cat give comfort to the dying, but you do not give that cat a name.

Years later, in Los Angeles, I’m being Google-mapped to my new job near the ocean. I am lost but for the invisible British robot woman stuck inside my iPhone 5c. She guides me past the Inglewood Oil Field—I’d never seen it before—the derricks—that seesaw village—up/down, up/down—drinking and drinking. I slam on the brakes, and on Slauson, on Cienega, on Stocker, on Blixen, we good reindeer all stop and shake our antlers, our hooves. We kick aside our slaying sleighs. We rampage and bellow, our joyous stampede leaving metal-limbed corpses, razed wires arcing.

In truth, I spotted the seesaws, then found a gravelly refuge to watch the sunrise. Glitzy clouds striped across the sky, pink and orange. Every derrick perfect: workers on a hillside. Beauty, the sneaky colonizer.

Beautiful, the flat-forever fields of Wisconsin as I barrel on through flurries, gobbling cheese curds, until, through the fluff, the end appears: the cemetery, where inside, somewhere, my mother’s granite waits.

I stay in the rental, sipping Pepsi. Beyond the gate: no crows; no wintry swirl; no iron tips of frozen leaves; no ghosts to fret the salted lane.

Jeff Hoffman’s first book of poems, Journal of American Foreign Policy, won the New Issues Poetry Prize and was a finalist for the California Book Award in poetry. Recent and forthcoming work at Barrelhouse, Bellingham Review, Smartish Pace, and Terrain.org.