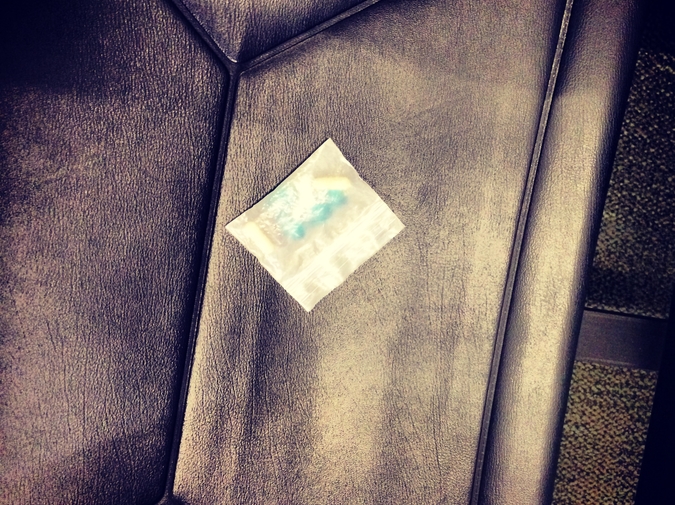 The guy from class calls me the most beautiful looking incel. He offers to pay for my dinner, but I decline. The guy from class comes back home with me and I tell him I’d invite him out but its girls only. He watches as I take off my makeup in the mirror and reapply it. We didn’t do our project at all. Instead we hung out for five hours, and now I’m late to meet friends. He asks if he can see my room. Of course you can see my room. He tells me he bought an ex girlfriend a $500 original copy of The Bell Jar. I say oh wow.

The guy from class is older than me. His most recent ex girlfriend works for the Tennis Channel. She travels around covering tennis tournaments. He flew to LA to break up with her in person.

The guy from class makes me feel like the universal woman. He tells me he wants to walk me to the train. It’s raining. I’m wearing a bucket hat and platform heels. I think he might kiss me, but he doesn’t. For some reason I wish he had tried to.

I take the train and then the bus. I walk to meet my friends. They’re just coming out of the bar. The bar was lame. We walk downtown and wait in line for another bar. The line is filled with women. Two men hand the bouncer one thousand dollars. He shoos them away. My friend is holding her purse under the awning. It’s real leather and brand new. She’s a little drunk. A group of seven women try to cut us, but the bouncer lets us in first. We look good tonight.

We go to a dive bar in Soho - the same one we went to the night before. My ex boyfriend showed me this dive bar months ago, but I don’t say that to them. I think he found it off of Google Maps.

I tell my friends that I accidentally went on a date with the guy from class. They say oh really. They say, how did you accidentally go on a date with him. I feel annoying for bringing it up. I don’t know how to explain to them who I become around men. I’m a little drunk. We’re drinking Coronas. A short college graduate approaches us. He throws his arms around our shoulders and calls us beautiful. We say thank you. He doesn’t offer to buy us drinks.

Another short man approaches us. He seems to be almost forty. He asks me if I like to read and I say yes I do. He asks me who my favorite author is. I don’t know how to respond. I ask him who his favorite author is. He says Hemingway because he really relates to the whole lifestyle. I ask him what his favorite Hemingway novel is and he says that he can’t think of the name but that it might be set in Florida.

My crush is looking through the window. I wave. I text him come save me because I know it looks like I’m really flirting with the Hemingway guy. He walks into the bar and hugs me. He introduces me to his friend who is visiting from home. His friend from home is attractive. I try not to look at him for too long. His friend from home just graduated with a masters degree in history from Yale. I wonder how this is so, I think they are both 21. I’ve never been to New Haven, I tell them.

The friend from home tells me he’s heard a lot about me. I ask him what he’s heard and he says all bad things. They both laugh. He says he’s kidding. I go to caress my crush’s face and forget my phone is in my hand. My crush winces and I apologize so much. The friend watches us. My crush tells me he has to leave soon. They are tired. The night before, my crush and I kissed in the park across the street until 4 AM. That night I sighed and said it was so sad I wasn’t looking for a relationship. My crush said but we are in a relationship though. He told me he wasn’t talking to anyone else. I sighed again. I reminded him that he’s going home for the summer and that I don’t want a boyfriend. We kissed. Sometimes I don’t know if I like the way my crush kisses. It makes me so sad.

Tonight he makes it clear that this won’t happen. We will not be going to the park tonight. My friends get into their Uber. They have to get to a brunch in the morning. My crush and his friend from home say they want to leave too. I lead the way out of the bar. The men turn to look at me. The men try to get out of the way but not really. I bump into them. My crush says that they are walking the other way. I pull a cigarette from my purse and put it in my mouth. I ask them if they want any jolly ranchers and they say sure. They search around for a blue but they don’t find any so they take a couple greens. They walk the other way.

A man on the corner asks me for a light. He is smoking Newports. He is probably 4 foot 11. I feel sad. I dig out a lighter. I am holding so much lip gloss in my hands that I thought were lighters. I fidget with them. I try not to drop any as I place them back in my purse. The man says thank you. The man follows me for a while. He asks me where I’m going next. He asks me what my name is. I tell him I’m going to meet some friends and that my name is Susan. He follows me some more and I text my crush that a man is following me. The man from the corner asks me what my number is and I give him a fake number. He says, Susie why did the call not go through to your phone. I tell him that I have two phones and that I gave him the number of my other phone. My crush doesn’t respond to my text. I see my apartment and know not to go up.

I tell the man from the corner that I’m actually going to meet my boyfriend and that he’d be very unhappy if I showed up with him. He says oh okay. The walk sign has turned into the blinking hand across Bowery and I decide to sprint across. I leave the man from the corner on the corner. I get home and wait for my crush to text me and he doesn’t. I forget about Hemingway, I forget about the sticky notes on my walls, I forget about the guy from class. I forget I told my crush that he is not my boyfriend. I forget he is going home for the summer and that he left me to walk home alone. I forget he is a bad kisser. All I can think of as I fall asleep is that he told me he wasn’t talking to any other girls.

Ellie Lynch lives in the East Village and is a Masters student at The New School. She works as a reader at a literary agency and as an educator at the Museum of the Moving Image. She is currently trying to quit juuling and cultivate a more mysterious aura. You can find her on twitter at: @i_guess_ellie