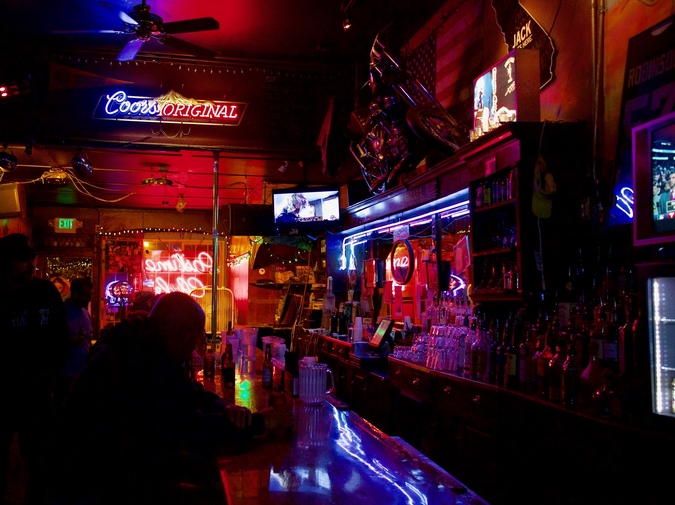 You're not sure if it's because you've been kissing for so long that you are starting to worry that your tongue might fall off or because the last time you kissed anyone for so long that you started to worry your tongue might fall off, you were a teenager, and there are now more years between the age that you are now and the last of your teenage years than there are between your birth and their start; or because, right before you kissed, she said that you reminded her of someone, she didn't know who and yet, from the moment she saw you in the window seat — and not looking at your phone like a normal person but actually full on staring at the various other people in the bar, most of whom, it had to be admitted, this being a co-operatively run anarchist queer bar, were pretty interesting to look at — she had this feeling like time was cloning itself only the clone was actually traveling backwards in time, into the past, and you said, what, like the rowing boat at the end of The Great Gatsby, and she said it was years since she'd read it and she hadn't even remembered that bit, but now that you mentioned it, she could literally feel something moving around in her chest, just like she when she’d first read it, which is what, actually, she was talking about, the way she felt when she first looked at you, which was maybe an intense thing to say on a first date but fuck it, she was queer after all, she could be the fuck however she wanted; or because the second to last person you dated said that you reminded them of their cousin's best friend they'd had a crush on as a kid, only, they said it right after you fucked and you said, what, so I am just a way for you to fulfill your fantasy and they said all love was a fantasy and you said, but it makes me feel used, and then they said a lot about what some queer theorist said about love being the only experience for which people were prepared to change themselves in order to sync up with another human, and they talked for so long that by the time they’d finished, you assumed they must be right, even if the word 'sync' then made you think about the times when your phone refused to pair with your bluetooth speaker even when it  it was literally nudging the speaker in the way the cat sometimes nudged your book out of your hand to get your attention; or because so many of the people in this bar are wearing the exact same dungarees as you, whilst others are wearing the jeans and baggy-but-edgy t-shirt you wear on most non-date days, whilst even those that are wearing the sorts of preppyshirts you’d never wear have the same short hair and glasses as you — but you feel less like an individual than how you imagined, after spending half a day down a wiki-hole on the topic, a worker ant might feel —  a joyful acceptance of the incompleteness of the both/and relation of their body to the whole  — only, you weren't working, except maybe to locate the glitch that would break down the pseudo-hive that was gender, which was probably what at lot of these other queers were now thinking about, only, they probably weren't thinking of it as a pseudo-hive, which may or may not mean that the neural or affective or whatever the fuck they were pathways that led you to this particular metaphor is what is particular about you.

‘I can't believe you're kissing with your eyes open.’ There is a lot of spit round her mouth; she wipes it onto her sleeve.

‘Then you must've had your eyes open, too.’

She opens her mouth to speak, then shuts it, starts to laugh. ‘I guess we're both freaks.’

Then someone spits the word ‘rhizome’ onto the back of your neck. It smells like the vegan chicken they serve here, and even though, when you ordered said chicken last week, you complained that it tasted like the vegan chicken from Morrison’s budget range and speculated that the two hour wait was not because the skinny vegan chef was ‘hand-crafting’ each piece of chicken according to a ‘bespoke recipe’ but actually running to and from Morrison’s, you can somehow tell that the vegan chicken this person has just eaten or is possibly still eating is from here.

And then you open your mouth to tell her all this, only for your tongue, which feels much sturdier than it did at the start of whatever it is this is, to venture into her mouth — as if it's there that it truly belongs.

Clare Fisher is the author of All the Good Things (Viking/ Europa) and How the Light Gets In (Influx Press). They live in Leeds, where they teach creative writing and study for a phd which looks at queer theory, experimental writing and failure. Their work has been published in The London Magazine, Lithub, ClavMag, Gertrude Press, 3:am and others. Twitter: @claresitafisher Insta: @clarefisherwriter