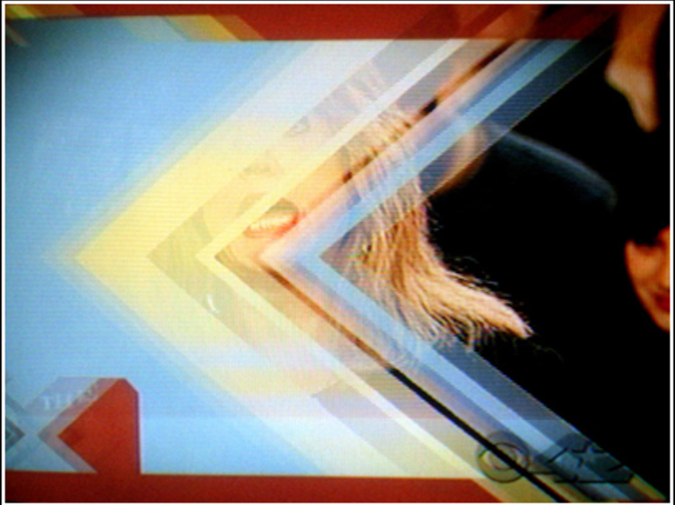 I'm a big fan of blue. The dark, deep blues. Like that James Taylor song, deep greens and blues are the colors I choose. Green's nice, too, but I prefer blue.

Don't know if I could call it my favorite, though. Red's right up there. Depends on my mood, I guess. If I'm fired up, probably siding with red, but if I'm all mellowed out, then I suppose it'd be blue.

Problem is, right now I'm not feeling particularly mellow or fired up. But "sometimes red, sometimes blue" isn't a choice, and while I sure as hell can't answer yellow or violet, if you slid a nice orange or green in front of me, who knows?

Most days, I wouldn't give it much thought, but this test is supposed to tell me who I am as a person, what kind of job would be right for me, so I can lead a full and happy life.

If I mark red, what does that say about me? Maybe red means I'm an aggressive "Type A" personality. Someone who has to have his way, who doesn't give a shit about anyone else's feelings or opinions. Maybe that's true, but it's not who I want to be, so if I pick another, does that person vanish? Can I actually be better by choosing the right color?

On the other hand, red is the color of warning, of caution, of stopping. Maybe choosing red means I'm hesitant and fearful, afraid of life and its choices. If I say I like red, does that mean I have to be that guy in the cereal aisle, the one with the button down shirt tucked in his khakis, buying the high-fiber brands? I hate tucking my shirt in.

If I had a third hand, I could measure the weight of red as a power color, the favored shade of the Fortune 500. Red could be the confidence of the bullfighter's sheet, waving in the path of life's oncoming horns, whisking away at the last possible moment.

I wish I knew what jobs were recommended for a person of the red persuasion. Should I shoot for pushing papers in a five-by-six cubicle, or should I brush up on my trig and teach high school math? Holy shit, what if red means mechanic? I don't know dick about cars, and I hated shop class.

It's tricky, all this color business, and my palms are sweaty. Happens when I'm nervous. Wouldn't you be? One wrong swipe of the pen and you'll find yourself shoveling horseshit on a ranch in Montana. But hit the color lottery? Mai Tais and white sand beaches, early retirement from the firm at forty.

But what of blue? Is blue any better, or does it simply offer a different range of unappetizing options?

It would seem to imply depth, like the deep blue sea. Perhaps a blue person is more alive underneath than a red. Red is eye-catching and flashy, but blue is substantial, secretive. Of course, blood is red, and there's nothing more substantial than blood, but we're on blue at the moment, and the thought of it like the ocean. Maybe there's a lot going on underwater, but to be honest, the ocean scares the hell out of me. Ignoring the storms at sea, which turn ships into kindling and ravage continents, there's a lot of violence beneath the waves. Maybe it's just me, I did see Jaws at a very young age, but I can't look at the water without picturing dark dorsals knifing the surface. Those black eyes, bits of shredded flesh clinging to razor-white teeth, enough to make me take three steps back when I'm ten feet on shore.

And way beneath, where only Jacques and the fish go, there's a labyrinth of grottos and canyons hidden in the dark. Not dark like your room when you wake up at three a.m. to go to the bathroom, because there your eyes adjust, picking up light from the smoke alarm, the red glow of the digital clock, or the blue-silver coating of the moonlight. No, down there it's dark like a windowless basement on the first night of new moon, with nothing to guide you in the hands-outstretched blackness.

Jesus, blue kind of gives me the willies.

Then again, blue is also the color of sky. And the sky is a place of freedom, where birds soar, floating on unseen currents. A place for clouds and hot air balloons and the Blue Angels, swerving and spiraling for our amusement.

Only thing about the sky is you have to be careful or you'll lose yourself. While the ocean is filled with things that find you, the sky is wide and empty and you can see for miles. The deeper you go in the ocean, the greater the pressure, until your bright red blood seeps from your ears, eyes, and nose. But the higher you go in the sky, the less pressure there is, which sounds great until you reach the point where you begin to break down on a molecular level, atoms drifting away from each other until there is no you, just space where you once were.

So if I pick blue, who am I then? A Navy Seal or a commercial airline pilot? Am I destined to feed fish to Shamu down at Sea World?

Maybe I'm way off-track. I'm boxing myself in, restrained by parameters of the question. What is your favorite color? doesn't mean I truly have to answer with the color I like most. My favorite could be the one I would most want to represent me. That gives me more freedom, the opportunity to choose which direction my life will go, instead of being tied to a predestined outcome based on my affinity for red or blue.

Still, I'm feeling limited by the choices. Red, orange, yellow, green, blue, indigo, and violet are wonderful, but they seem so extreme, so black and white if you will. What about turquoise, with its swirl of green and blue? Brick red, with its hint of brown? Peach, with the orange, yellow, and red mixture children everywhere use as the color of white people's skin?

Actually, the more I think about it, the more I think I should pick gray. I don't really like it much, but it offers some intrigue. Any six-year-old can tell you, if you run out of your Crayola Gray, mix black and white. Presto.

Black: the absence of color.

Gray: what the fuck?

How do you get a color by mixing all color and no color? Hell if I know, but since my current situation has me relying on color preference in order to determine what type of job I should look for, it sure would have been nice if they could have at least offered gray as a choice. Seems like it kind of covers all the angles to me.

Five minutes ago, I never would have considered gray as my favorite, since it isn't. Now I'm thinking about a write-in candidate.

Think about it. If gray embodies all colors and the absence of color, then wouldn't that make me open to the job selection of every color? I could be a librarian or the next Crocodile Hunter. An artist or an evangelist. My choice.

Damn. More I think about it, gray sucks, too. It's kind of like being agnostic in that it implies you're afraid to take a stand. I may not want to be Christian or Atheist, but at least they believe in something, even if it's nothing. Agnostics are like fortune cookie fortunes or daily horoscopes, generic enough to never be wrong.

Great, I narrowed myself down to the equivalent of a cowardly fortune cookie. This is killing me. There's twenty-nine more questions, and I can't get past the first one.

Do you look at the ground or around you when you walk? Are you kidding me? Okay, okay... first things first. Red or blue?

Currently, Jared Ward is the oldest person in 90% of his classes, finishing his undergrad at the University of Arkansas before moving on to an MFA program. He is the director of the Ozark Tennis Academy in Bentonville, AR. His work has been accepted at Evansville Review, New Delta Review, Concho River Review, Barrelhouse, ken*again, and HazMat Review.