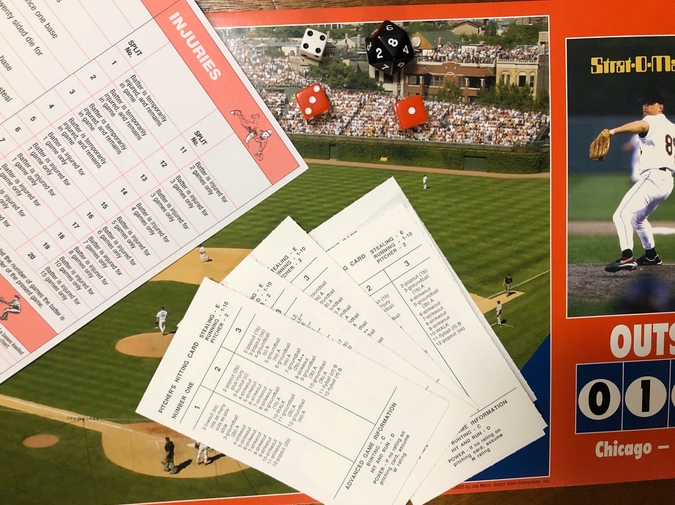 “Like real baseball, Strat-O-Matic attracts competitive people. While the strategies you employ often will be crucial to your success, the randomness of dice rolls means that anything can happen. This is what keeps the game fresh and gives each underdog hope.”
–How to Play Strat-O-Matic Baseball

This is our second time playing but he’s still constantly clarifying, correcting. The game, this one or the real one, has strict rules. You can’t fuck it up. You need to understand every instruction, every play, need to speak the language, know the abbreviations. He’s the authority. I didn’t play sports growing up. I didn’t even watch them on TV. My parents didn’t have teams. There was no team in my house at all, everyone wrestling for their own shit. No working together, no greater good.

His parents are Portuguese immigrants, so he didn’t have any teams either, had to pick his own. In Connecticut it’s New York or Boston. He picked losers—the Jets, the Knicks—but he was a Yankee fan from ten years old. At 24, he got jaded. They can just sign anyone they want, he said. He switched to the White Sox and now he’s mad all the time but happier.

I should like the rules. I should respect them. I have rules in my head, ways of being, that I’ve gone by since sixth grade. Touch this an odd number of times, your mom dies. Check behind each piece of furniture before you go to bed in a specific, clockwise order, and no one will murder you. I have my own abbreviations, too.

Owen (roll 6x4); flyball (cf) B (batter is out on flyout, Gehringer scores, RBI for Owen)

We figure out a little later that we are doing this one part wrong, looking at the wrong card, the pitcher and not the shortstop. The guidebook for the game is twenty pages long. Tiny type. I want to start over but he says no. He says we’ve gone too far and are in too deep. I feel a familiar strain in my jaw, a pull in my chest. Sometimes I get hung up on sounds on TV, like when I miss a bit of dialogue or something, and I get stuck. I need him to rewind it until I hear it again, however inconsequential it is. Are you kidding me, he says, but he still rewinds it.

He tells me the nicknames for the teams, the things they do to avoid losing. Wade Boggs always needing to eat chicken. Pitchers not touching the white lines. Jorge Posada pissing on his own hands. I’ve seen the way players adjust their clothes in a certain order. Tap, pat, touch, pull.

There are three ways you can play the game: Basic, Advanced, and Super-Advanced. We’re not really doing the “Strat” part, which I assume stands for “strategy.” We’re stuck at Basic in the Old Timer Special Edition. We’re using the numbers, setting a lineup, all that, but we’re not poring over the details, not figuring lefty v. righty, not considering stadium. Plus even if we did, we’d still have to roll the dice.

He tells me that when he can’t sleep he lists all the winners of the World Series in his head. He says he can easily do it from 1945 onward, but some before, too. He repeats them until he gets tired. I imagine them scrolling through his mind, neat and clear.

All I know about baseball I learned from years of him leaving ESPN on in the background, from high school to now. From him trying to make me pay attention at games. I’m only into the ancillary. The mascot, the stadium food. The idea that all the men at the stadiums pee into a big trough. The only thing I’ve ever sought out on my own was that documentary about Steve Bartman. Something about fucking up your whole life just by sticking your hand out fascinates me. Just one wrong movement and you’re a dead man.

When I can’t sleep, which is more and more, I think of how everyone close to me is going to die, play out the funerals, think of the memorial pictures they’ll use. I think of things like maybe our two big dogs will dig under our fence and kill the Papillon from the house behind us. I picture blood and dismemberment. I think of the nice old woman crying over the body. I think about how we’ll have to put our dogs to sleep, how we’ll have to move. The idea crystalizes and the following day, when I picture it again over and over, I have to make sure my movements undo it, block it out.

What you’re doing is trying to control the uncontrollable. You’re attaching meaning to a set of absurd actions because you can’t come to grips with the idea that you ultimately have no control over most things in your life. But knowing that you do this doesn’t affect your willingness or need to perform the absurd actions. That’s the thing. You know it won’t work but what if it does?

He said he’s played the game before, but by himself. The directions say you can do that, as a kind of solitaire. He said he only played halfway through and quit. It wasn’t fun alone. I asked him if he switched chairs every half-inning.

I don’t think the game takes into consideration the curses except as a stat showing a player was bad a certain year. There’s no other little mark on a card. There’s no indication that sometimes you can prepare all you want, ready yourself, and still some outside force, something completely beyond your control, something you’d never even thought of, can destroy you.

Now, as I strike out, he tells me something I didn’t know. He tells me about the time in 2004 when, newly-licensed, he drove downtown to light a candle at the Basilica for the Red Sox to lose the World Series.

He used to have to call me before high school to make sure I’d get up. Getting up meant I’d have to start the rituals, but even just being awake meant my mind was free to fuck with me, embed all the bad stuff that could happen if I didn’t walk into a room the correct way, if I didn’t tie and retie my shoes until it felt right. He reassured while I cried about complicated irrationalities into the receiver, as I described the violent pictures flashing across my brain. Now, he picks out cans of seltzer for me because every one I touch feels wrong. He folds my clothes because I have to hold my breath while I do it, and I keep almost passing out. He looks away when it takes me ten minutes to walk into a room.

Earlier in 2004, we were coming home from the haunted graveyard at Lake Compounce. His mom picked us up in her Jeep because she didn’t want him driving in the dark. His asthma started acting up, the chill of the October air in his lungs, the choke from running in the outdoor strobe-lit maze. She pulled into the gas station, ran in for a water bottle. The keys still in the ignition, he switched on the radio to the ALCS, the fuzz of the AM slicing in loud as he took deep breaths. He yelled at the radio, happy, gasping.

The other games, later in the week, we watched while talking on the phone. I sat in my room with the cordless in the crook of my neck, cross-legged, cross-fingered, not moving. I’d done it the year earlier, too, the Aaron Boone year, and it worked. I held my fingers tight. I didn’t want his heart broken. I’d only begun to learn how much it could mean to a person. And I was good at this, good at using my body to prevent tragedy, to thwart loss.

About a week later, half the class was shit talking by the lockers when the Red Sox broke the curse. He always says some version of this after a loss, probably did back then, too: This is what happens when you tie your happiness to something you have no control over. He always says this, but we both keep on doing it anyway.

Emily Costa teaches freshmen at Southern Connecticut State University, where she received her MFA. Her writing can be found in Atticus Review, McSweeney’s Internet Tendency, Barrelhouse, Monkeybicycle, and elsewhere. You can follow her on twitter @emilylauracosta.