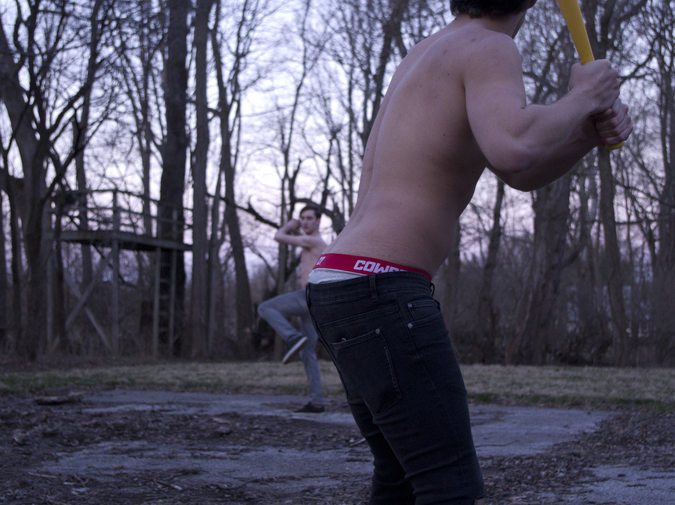 Evan, in a cheap hotel room.
Evan, rolling joints of shake he copped in Richmond.
Evan, ordering a pizza while I suck his cock.
Evan, watching Telemundo, 2AM. I’m ready now—let’s go again.
Evan, fucking me twice in the shower.
Once on the floor.
Once in the chair by the bed.
Twice in the bed.
Evan, tying me up with a black dress sock.
Evan, jerking me off.
Evan, whispering I want to be your whore into my ear
as I laugh and squint to see him through the blindfold.

Evan, getting dressed each time it’s over.
Evan, who’s ashamed to let me see the places I have kissed him.
Evan, telling me about his women.
Evan, 19, skinny, white as pearl. Ordinary. Evan, my obsession,
ashtray full and foul, but no reason to leave just yet.

Evan, nobody expecting him, tonight.
Evan, nowhere else to go.
Evan, someone that I love is going to die.
Evan, I don’t want to be alone, tonight.

Evan taking me in bed, again, but from behind this time, while the sky
sheds the night like an ugly dress.
Evan tugging on his jeans.
Evan, pulling a black t-shirt down over his head.
Evan stealing the last of my smokes to tuck behind his ear.
Evan, a cell phone he won’t answer, stuffed in his back pocket.
Evan, leaning down to kiss my forehead.
Evan, gone.
Evan, empty pizza boxes. TV snow. Evan, the nightstand
with the bible still inside.

SP Mulroy is a nationally recognized writer and performer, and an award-winning professor. He holds an MFA in Creative Writing from the University of Wisconsin-Madison, is a 2013 Lambda Literary Fellow, a 2019 Villa Sarkia Resident Artist, and a 2017-2018 Writer-in-Residence at The Kerouac Project.