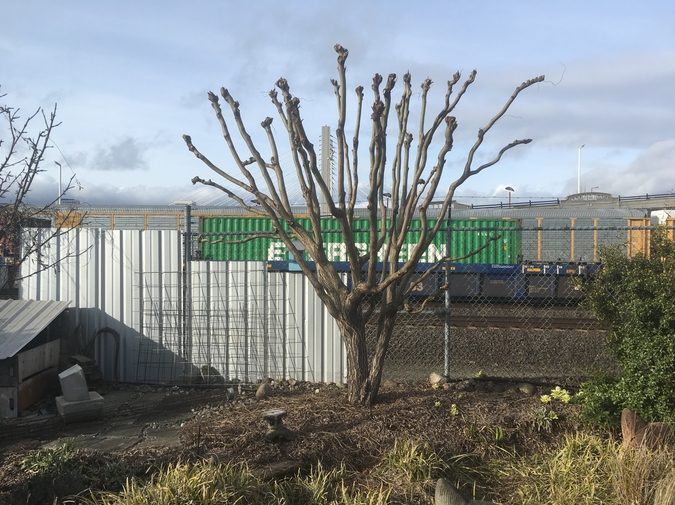 I sprinted through Busch Stadium, furious with the architects, the workers looking at me with raised eyebrows, Shel, myself, and my father. The crowd groaned as our insanely overpaid clean-up hitter struck out with two men on, ending the inning and killing the rally. The announcers on the TVs mounted along the walkway sounded worn out from a long afternoon of mustering enthusiasm and positive spin on a 12-0 drubbing. An apt metaphor for my god-forsaken life.

A bathroom sign stuck out of the wall next to a closed BBQ joint. I skidded around the corner, sprinted to the closest urinal, and frantically ripped open my belt and pants, tap-dancing the whole time. When I finished, I didn’t want to return to Shel and her flat, hard stare, and the slouching teens between us and the aisle turning their caps inside out and crying out for a “legit” rally. I decided to try taking a shit just so I could sit and think.

I tried today, I really did. But I was miserable company as usual, inning after inning until Shel lost patience, until our shrill yelling felt inevitable, until we seemed destined for divorce, her second, my third. Kinda like the Pirates — yes, the Pirates — adding a run every inning until people began leaving to beat the crowd, wondering why they’d suffered the humidity so long and how we were swept by the Pirates. And I’d thought a fun day at the ballpark would save us!

Sighing, I wiped the sweat from my forehead, slouched forward, and rested my forearms across my knees, and that’s when I noticed it. A Socratic dialogue etched into the stall next to the toilet paper dispenser, some drawings of an elephant and a clown, and various initials.

There are no gods followed by a scratched through more perfect than Jesus.

An arrow questioned, What if you’re wrong?

Another arrow accused, What if YOU’RE wrong?

And finally: You see nothing!

I fished my phone out of my pocket and googled John 20:29: “Blessed are those who have not seen and yet have believed.”

I read the dialogue over and over, through the final run on the bathrooms, into the bottom of the ninth, well past the point when Shel would be concerned in spite of her resentment, or not, and I thought about my father and the way he'd quietly walk across the room and hold my face in his hands when he wanted to tell me sorry, it's okay, or I love you, even after I became a young man. How I wished Shel would do the same and erase all the slights and missteps that seemed like life-altering regrets in their accumulation. I knew she wouldn't.

Couldn't blame her. I had become a complete ass since dad’s death. So unfair. Lung cancer at 69, never smoked a day in his life.

At the funeral, countless people said my father was in a better place. But how did they know? What proof did they have? I wanted to believe them, I knew believing them would make all well, or at least tolerable. But it felt too convenient, too much like false comfort. I couldn't believe, I could not see, just because I wanted to.

And I didn't really want to. Even if there were an afterlife, my dad, a lifelong agnostic — not to mention a Cubs fan — was probably burning in hell. Unless I simply chose to believe otherwise.

Like Mom smiling bravely each time someone said Dad was in a better place, even though she knew his agnosticism better than anyone. Like my brother smiling and nodding next to her without a second thought. Like the idiots turning their caps inside out and Shel insisting that we stay until the end, refusing to look at me, saying in a sing-song voice, “You never know, it ain’t over til it’s over.” All of them far happier than me. How I hated them.

The crowd roared into the toilet stall. Then I realized the broadcasters piped into the restroom had been yelling for some time, but I couldn't tell you anything they’d said.

I tuned back in, and somehow, the score was 12-10 with the bases loaded as our twenty year-old star shortstop approached the plate. The Pirates conferred on the mound, and I hurried back to my seat.

Our whole section was on its feet, clapping, yelling, bouncing, pointing, lightly shoving each other as if to say, Can you believe this? All of the fans wearing hats had turned them inside out, and half wore them sideways with the bill pointed straight up. I shuffled past the boys next to us who had possibly inspired the rally caps and saw reverent tears in their eyes. I saw Shel wearing her Cardinals hat inside-out over her long, curly blond hair, clapping her hands high above her head, smiling like a child.

I stepped next to her, and she turned, leaned over, touched my chest, and met my eyes. Then she cupped my face in her hands just like my father and said, “You’re missing it!”

The air hummed with the crowd’s noise, and the concrete floor vibrated from the sound waves and bouncing and stomping. Peeking above the stadium and the downtown buildings, even the Arch strummed like a tuning fork. And the jumbotron showed seas of rally caps throughout Busch.

Shel pushed her hat onto my head, cupped her mouth, and screamed at the field. I removed the rally cap and slowly turned it over in my hands, unsure what to make of it.

Eric Sentell teaches writing at Southeast Missouri State University. His fiction has appeared in Long Story Short; Moon City Review; Unlikely Stories 2.0; Blink Ink Online; SFD: Short, Fast, and Deadly; Shout Out UK; The Penmen Review; B O D Y; The Bookends Review; and other online journals. In September 2010, Long Story Short selected “Stolen Thunder” as its Story of the Month. He has published many essays at Role Reboot and The Good Men Project, and he is currently writing a novel. Follow him @ericsentell or ericsentell.wordpress.com.