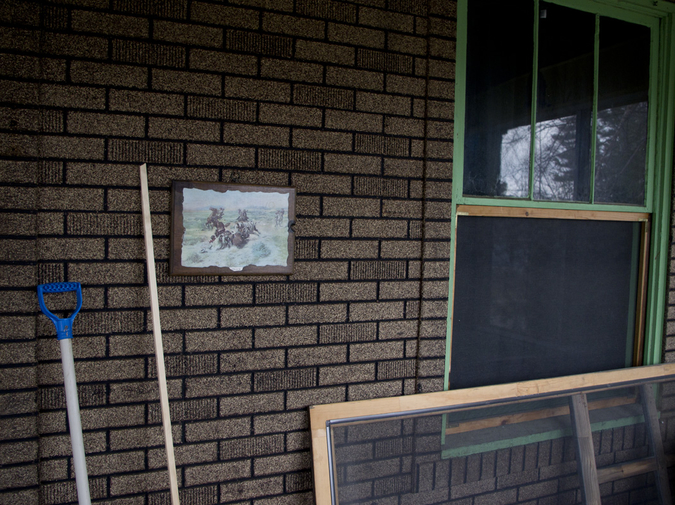 Carl is gonna play catch with Wade Boggs. He isn't all clear with the details, but it somehow involves this. Clumps of his own hair falling soft on his hands, itchy on his neck. Sitting still for Dad on the barstool, toes gripping the cool metal ring.

The emptiness of the apartment amazes him.

All Dad brought from home was the turntable and five milk crates of records. He has an orange couch that smells and Carl slept there last night. Tonight he will sleep back at home, but Dad will sleep on the mattress in the bedroom here.

The record "Lodi" is playing, but soon they'll have to change it to the radio. The game will be on.

The buzzer sounds like a little lawn mower. It tickles his scalp, sends shivers into his fingers. Soon he won't have any hair. Will Alison want to be his friend at the roller rink still? Alison: who races by and messes up his hair. He will miss that but who cares.

"Dad, how long does it take to grow back?"

"Keep still. Do you want me to gouge a hole in your head?"

Carl lowers his head, keeps still, asks again: "How long does it take to grow back?"

"It depends. It depends on whether or not you're in the ten percent."

Dad clicks off the buzzer, leans close to Carl's head and blows all over. A cloud of little hairs rises and sinks. Carl checks to see how serious Dad is. Dad: bald but for a thin track of orange ear to ear. Dad plants a hand and straightens Carl's head. "Still I said. We ain't done yet, skunk."

"Half past four. Where's the party at?"

"The game started at ten after!" Carl leaps up. Dad catches his elbow and pulls him back onto the stool.

"Cool it for a minute. All I did was buzz you, now I gotta shave you. Do you think anyone's gonna think you've got cancer looking like this? You look like you just walked out of a punt, pass and kick contest. We gotta make you look sick."

"Turn on the radio!"

In a moment they are joined by Ken Coleman, the voice of the Sox. From the minifridge on the floor, Dad fetches a can of Miller for himself and a can of Orange Crush for Carl.

"What kind of game are you talking about anyway?" Dad says.

"Sox and Yankees!" As if he didn't know.

It’s the bottom of the second inning. No score. Bill Buckner at bat for the Sox with Tony Armas on base. Boggs would’ve batted in the first.

Crack. Coleman calls the play: "It's a sharp grounder to third. Pagliarulo digs it out of the dirt... chance for a double play... nope, he'll take the easy out at first. Buckner moves the runner. Two outs. And mister Rich Gedman steps to the plate."

Dad returns with a razor, a can of shaving cream and a steamy tub of water.

"No score," Carl tells him.

Gedman strikes out swinging. An Armour hot dog song begins to play. Dad's beer makes a glugging sound and a tap-tap sound as Dad knocks its last drops into his mouth. He pitches the can into a cardboard box, rattling the ones that are already there. "Strike!" he shouts. "Let's do this thing."

Dad drips warm water onto Carl's scalp. He shakes the can, fills his hands with foam, spreads it all over. The razorblade scrapes backward from Carl's hairline. After every three strokes Dad dips the blade into water, shakes it, and returns the blade, newly hot, to Carl's head. The shave takes a long time. Foam drips into Carl's ear but he doesn't dare move to swab it out. He listens, as if from underwater, to three scoreless innings.

Willie Randolph at bat for the Yanks, Oil Can Boyd on the mound. "Randolph swings and... it's a long fly ball, going... back, back, back... and... caught by Dwight Evans. Long run for Evans, folks. Snagged it on the warning track."

Finally Dad drops the razor, plunk, into the tub of water. He circles the barstool, inspecting. He retrieves the BoSox bar towel from the couch and gives Carl's head a good wipe-down.

"Not too bad, you think? A couple nicks here and there. That'll stop bleeding in a minute. Run and check yourself in the mirror."

Carl looks like an alien: tiny blue veins, red razor marks. He hops his fingers like a water spider over the impossibly pale terrain. Dad appears behind him in the mirror.

Carl had forgotten about her.

Dad sits on the toilet seat, rests the tub of water by his foot and pulls Carl toward him. "Close your eyes, Son." Cool cream slides over one eye and then the other. And then the blade scrapes. Small strokes bite and tug and twitch Carl's eyeballs.

"Don't move an inch, hear me." Dad whispers. Carl can smell his breath. Dad whispers, "Shit. Okay, no, keep them closed. It's okay."

Carl's eyeballs jitter like crazy behind their lids. He strains to hear the ballgame playing in the other room. All he can make out is Ken Coleman calling, "Foul ball!"

Dad's wet thumb cleans the spaces above his eyes.

Carl's eyebrows have vanished; in their places are pink and puffy slugs of skin. A tiny thread of blood trickles from a pin-point gash, around his eyesocket, along his cheekbone, halting at the cliff of his face.

Dad wets a washcloth, wipes clean every bit of Carl's face, head, the grooves of his shoulders where bits of hair have collected, down the front of his shirt, warm and wet against his chest.

They stare at their reflection for a long time. Bald father, bald son. Then Dad says: "Let's listen to the goddamn game."

It's the bottom of the sixth, still no score. Carl rolls a cold can of Orange Crush over his brow and around the curve of his skull. Wade Boggs is up with a runner on second, a runner on third, one out. Color-man Joe Castiglione pipes in: "Niekro's struck out ten Sox batters, folks, and before this mess he'd only allowed two hits over five and a third frankly dominant innings."

Coleman calls the pitch: "Boggs bites at the first worm he's tossed... and it's looking good... yes sir! It falls in the gap and this one's going all the way to the wall! Marty Barrett is in... Dwight Evans is in... and we've got something to cheer about folks! Boggs does it again! Two, nothing, favor the good guys!"

"Fuck yeah baby!" Dad pumps his arm. "That's Boggs for you!" he yells. When you least expect it--zip!-- there it is. A double over your head Dave Winfield, you big clumsy fuck! They need to put you back at DH! Falling over your feet."

"Fuck yeah!" Carl experiments, shivering at his own voice.

"Now Big Jim Rice steps to the plate," Coleman calls. "And the pitch... he gets a hold of it... it might be... yes sir!... good golly, folks, they usually show a movie on a flight that long! It's out of here! Four-zip Sox and Niekro looks exhausted."

“You can say that again, Ken," Castiglione chimes in. "Is that his arm or a fettuccine noodle?"

Carl and Dad leap off the couch and off the floor. Carl laughs so hard he feels fizzy Crush in his nose and behind his eyes. They high five with free hands as drink spits from the mouths of their cans. A two-run double followed by a two-run homer? Unbearable.

It's raining; the lights are bleary outside the passenger side window. Carl was supposed to be home at six-thirty and they’re late already, but Dad’s driving below the limit, sipping the can of Miller he keeps between his thighs, not talking, not turning his head. The game on the dash radio blurs in and out of static as they pass under power lines. The car smells like pennies and scorched dust and beer and Dad's sweat and hair. Carl's bare head tingles. When the game is over there will be nothing for Dad to do but play his records and he's heard his records so many times already. If he just stayed at home they could look at baseball cards together or watch Cheers or play rummy or checkers.

"Dad, can we play a game of checkers before you go back?"

Dad doesn't answer. When he turns onto Hyacinth Circle he switches off his headlights and eases his foot off the gas. The car coasts darkly down the street. It rolls into the driveway so slowly the gravel beneath the tires barely makes a sound.

"Can I listen to the rest of the game in the car?"

"But it's the ninth inning!"

Dad pats his hand around the back of the car until he finds his old Sox hat with the retro logo. He gives it to Carl and says, "You better not let your momma see what we did until I'm safely out of here."

Dad flips the headlights back on so Carl can see his way up the front steps. The window on the door is steamed over. Mom must be cooking dinner. Carl hopes it's macaroni.

Jeremy Rice has an MFA from Queen's University of Charlotte. His work has appeared in Post Road, Meat for Tea and Gone Lawn. He lives and writes in Portland, Oregon.