Questions for Rachel B. Glaser 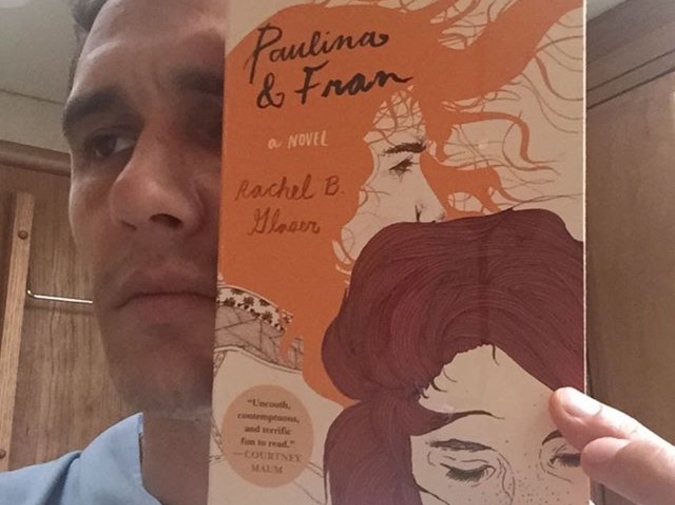 I've respected Rachel B. Glaser's sense of mischief for years. When I heard she'd written a novel, Paulina & Fran (2015), I was excited to see it. What the heck could it be? I thought. Was it going to be another Pee On Water (2010), holding stories like the “Jon Lennin Xperience”? Who else could spin a story about a virtual reality-based video game where coaxing Yoko Ono into an intimate “next level” climax was the only way to advance to a pancake breakfast? It's pretty mind blowing how out-there Glaser went with POW while maintaining a narrative straight face.

Then Moods was released by Factory Hollow Press in 2013. A book of poems which showcased another side of Glaser's mind as an absurdist, albeit earnest, wordsmith, who did everything but take herself TOO seriously. Her poems titled “incest is lazy” and “God is popular” were featured on VICE. Nylon Magazine named her one of the “Coolest Poets to Know.” From McSweeney's to PEN America—her street cred in the world of writing is pretty solid.

Glaser, who studied painting at Rhode Island School of Design then fiction at the Umass-Amherst MFA Program in creative writing, isn't just a writer/poet. The Caravaggio digital quilt which adorns the cover POW is her own design; her portraits of NBA players have been in countless art shows and are all over the internet as a testament to her lifelong love of basketball.

Enter Paulina & Fran, Glaser's first novel released by Harper Perennial this year. The story of striking, sexually adventurous Paulina, and her relationship with Fran, an aspiring painter, whose demure innocence Paulina finds irresistible. Mostly taking place at New England art school, P&F is an unexpected departure from Glaser's previous creations. Namesake characters etched in a world which could exist—pretty realistically, all within the sprawl of cliques, muses, elusive conquests trying to prove their artistic genius to the world and themselves.

Sharp, sassy, and insightfully funny—Glaser's style is deceptively simple. She makes writing a novel look easy. Reading fun. Whether she's called a designer who writes or a poet who painted Lebron is up to whichever audience finds her. But to me Glaser holds court as a mad scientist, a virtuoso of form whether by language or anything that takes shape from her mind.

I reached out to Rachel via email after seeing her read at a packed Housing Works Bookstore in Soho a few weeks ago. This was our conversation:

Paulina & Fran is epic on many levels: it's compelling, sharp, everything's there for a reason. Do you think great writing has more to do with: what TO do, or what NOT to do?

Language-wise? Both. Each word should do something. My old fiction teacher Sam Michel used to say about bad writing "the words jump all over the page." I began to see what he meant. If the sentences have extra words, if they are needlessly repetitive, if the phrasing is awkward—the words feel haphazard and the eye darts around growing disinterested. Cut those extra words like they cost money! But if I have to pick one, it's what To do. Be bold! I think the goal is to be able to read your work out loud from a mountaintop without hesitating with new edits.

Speaking of being bold, Joy Williams read in Brooklyn a week ago where she and Siri Hustvedt discussed the current state of fiction, among other things like the ubiquity of dogs in Joy's stories (“I like dogs, I have a couple”) and booze (“People say things they would never normally say when they've had a cocktail or two and my characters say a lot of these things”).

Joy's opinion was that “today's fiction has become too self-absorbed” to be worth a crap, although she has “hope that this phase will pass soon.” As an admirer of Williams' work, do you agree with what's she's saying?

Joy Williams is definitely one of my favorite writers ever. I don't feel confident weighing in on "today's fiction" because it's so vast and I've read so little of it. I think Facebook and smart phones are aspects of a pretty self-indulgent time, so probably some of today's fiction is exploring that? It's also sort of exciting. So many people are publicly expressing themselves. Twenty years ago, way less people were taking pictures and making music and movies.

I like how technology and the internet has encouraged endless experiments by people who don't consider themselves artists. Online publishing has popularized a kind of stylized nonfiction, also some diary-like pieces. Maybe that is what Joy is referring to. Sometimes it's a drag, but like anything it depends on how it's done. There are some great self-absorbed characters. I loved hanging out with the narrator of Ben Lerner's Leaving the Atocha Station, though I know he drove some people crazy.

Yeah, count me in as one of the people that book drove crazy. I think I used the term introspec-centric to describe it at some point, but I could've been having a bad day.

Your first book Pee On Water was released by Publishing Genius Press (Hi Adam!) in 2010. The final piece in the collection (a mindf*ck of evolving imagery and also where the book got its name) stands out in this year's New American Stories edited by Ben Marcus.

Having cut your teeth in indie, where the term experimental or stream of consciousness has been thrown around to describe a decent chunk of output, Paulina & Fran is more straightforward. What inspired the change in technique?

It wasn't a conscious shift. Paulina & Fran started as a three-page story. When I decided to write it as a novel, I knew it would be an interesting challenge to make it exciting without including supernatural characters, epic montage-pacing, or futuristic scenarios. Instead, I focused on the clash between characters, and what could be accomplished emotionally and visually sentence-to-sentence. I knew that some readers who appreciated the stylistic risks in Pee On Water might not be as excited by P&F, but I also knew that P&F would appeal to a lot of readers who might be befuddled by POW.

The term “friendship” has been used by some to describe the relationship between Paulina and Fran, but during a recent post reading Q&A in Soho you said it's not really about friendship at all. To me your novel reads more like a love story—from origin to tension to pining. It's pretty romantic, wouldn't you say?

I like your take on it. I too see it more as a love story than a story of friendship, but I think it lies between the two. There's no real term for their relationship. There's the term “frenemy,” but that's a silly word. I think with new friends there is often a crush-like feeling. Someone has entered your consciousness, and you theirs, and that makes waves. Paulina and Fran are linked together even if they aren't in direct communication and readers call that pairing “friendship” for lack of a more specific word. Some readers might consider P&F's intimacy as another aspect of young female friendship, while others would say that the two are courting each other from the start, and that the dynamics are more as lovers than friends.

Let talk about Cal Morgan who's maestro'd a coterie of unstoppable voices—Roxanne Gay's Bad Feminist, Lidia Yuknavitch's the Small Backs of Children, Jess Walter's Beautiful Ruins, and Kate Zambreno's Green Girl—to name a few. He even made it through Blake's 300,000,000—how he kept his wits editing that bible of nightmares, I have no idea. How did the two of you get together? What was it like working with him as an editor?

I had heard very positive things about Cal from Blake, but my agent Claudia Ballard is the one who sent my book to him. Both she and Cal greatly improved the book. With their suggestions, I added a Norway flashback, fixed the pacing of Senior Year, added a part where Paulina imagines her own funeral, simplified some of the perspective switches, cut a minor character and a couple of unneeded scenes.

Cal is very open-minded and interested in so many different things. He's got a great appreciation and understanding of women—he "gets" them, which I was so glad for. He never tried to simplify the characters' conflicting and ambiguous emotions or tone down the weirdness. Working with him and Claudia was so satisfying because they both love what they do and have good senses of humor. That's really important and freeing.

Here's part where Paulina imagines her own funeral:

“If Paulina had to die one day, as every woman had before her, she liked to think her funeral would outdo this one in elegance and expense. There would be swans, and celebrities, and a river of tears. The gods would hover. Horns would sound.”

There are hints throughout your novel that Paulina might be a total sociopath, straddling a line between just being a pretty girl—testing her powers for validation versus straight-up hedonistic curiosities, but this is what makes Paulina interesting, right? Because somehow you manage to make her likable—and then you really push it at the funeral.

I'm glad you find her likable! The main criticism I hear about the book is that Paulina is unredeemable. It plays into a bigger conversation the internet loves to have about unlikable characters. Some people don't want to hang out with characters they wouldn't be friends with, and other readers love to get close to people they wouldn't seek out in real life. I love a character who's funny and blunt and shakes things up.

It's interesting how awful people find her, when she doesn't actually do many bad things. Sure, she's seduced other people's lovers, and maybe she uses sex for entertainment, and manipulates the registrar system, and can be dismissive of friends and strangers, but she never kills anyone! Do you remember reading In Cold Blood and feeling fond of Perry? What about reading The Stranger or Lolita? I love the emotional situations books get us in. I like a character that unsettles me.

Humbert Humbert. What a freak freak...

James Franco posted an Instagram selfie with your novel a day or so after its release (approx 60k likes so far!). How did this affect your day?

It made me very happy. My boyfriend got a call from his sister who'd gotten a call from her boyfriend. He got off the phone with her so abruptly that I was afraid something bad had happened. Seeing Franco with my book was so funny and great to me. It made me feel like anything can happen. Like Kevin Garnett yelling "ANYTHING IS POSSIBLE" when the Celtics won the championship. My favorite part was reading all the Instagram comments by Paulinas and Frans. There are so many!

Have you read anything – a) old b) new c) unusual – lately that impressed you?

I'm impressed by Ottessa Moshfegh's exceedingly well-written, dark, dreary, disgusting new novel EILEEN. I'm glad to be alive while she's alive, and glad she's so prolific. She's the main reason I subscribe to the Paris Review. I also loved the wild experience of reading Miranda July's The Last Bad Man. The oldest thing I've read this summer is D.H. Lawrence's Women in Love, which I thoroughly enjoyed and found much to admire even if he does take his time describing things a bit. I'm about to read Kelly Link's Get in Trouble and Clancy Martin's Bad Sex.

Sabra Embury lives in Brooklyn with her son Felix. Her favorite palindrome is "Mr. Owl ate my metal worm." She tweets at @yrubmEarbaS.