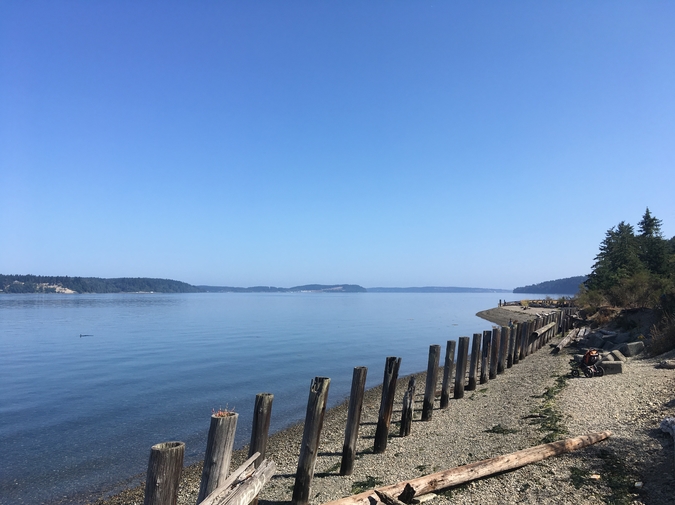 The first time I asked him, he said I was way too young.  The second time, he said he was way too old.  The third time, he said, OK, but be prepared. I didn't ask for what, because it wouldn't have made a difference. I'm the type whose flashlight goes dead when the electricity fails.

During a hushed heavy snowfall, after I had kissed the inside of his wrists, I heard him say, "I can't do this."

It was close to two, we were on lunch break, or I was, so I didn't ask what he couldn't do. He rattled off a bunch of Japanese movies, using the foreign titles, not the English ones, as though he knew Japanese.

"They're classics, you probably don't know even one," he said, in a weirdly accusatory tone.

"I once saw a remake of Seven Samurai," I said. "Or I think it was a remake, it was in English."

"I do get it. You're passionate about Japanese movies, which is good. It's good to be passionate."

"I can't stand when people use the word passionate.  This isn't about movies, it's about you."

I guess Steve felt if we were "together-together," I'd watch every film he liked, hang on his every word, which I didn't even do for my husband who wasn't passionate about anything.   But he had a point, it was about me, it had to be, no one else was here.

"Jesus," came an angry voice from the doorway.  A forty-something wearing black leather leggings, her dark hair slicked fiercely back, three gold earrings in one ear, but all I could think was, she has the key to Steve's apartment, and I will never have it even if I waited a hundred years.

"And you are? Forget that," she said as if I were mopping the hardwood floor and doing a bad job.  "Who you are doesn't matter."

"Except to me," I said, but she didn't crack half a smile.

I didn't waste time. I squeezed into my pants, which were annoyingly tight even though I'd just bought them; and then there were the tall boots to lace up.

"Anne," Steve said in a new adult voice, "this person is irrelevant."

"You don't have to tell me that. She is a symptom, like Dr. Perelman says. It's your fear, Steve, it's the same pattern. God, you are predictable.  Just look at her, take a good hard look and think."

I wondered what she was looking at, exactly. I asked Steve: "Are you two married?"

He frowned as if I had barged in on an intimate dinner party. "That is seriously none of your business."

I turned to the woman. "As a matter of curiosity, do you like Japanese film?  Can you name a few? I'm just wondering, it's actually a new hobby of mine."

"She must be totally insane," the woman said, and Steve nodded.

Then, before I knew what was what, she hurled my coat out the window with considerable force.  The apartment was twenty floors up, so the coat had far to fall. It was an odd sight, the tan garment fluttering down, against the pearly white sky. We all paused to watch its slow-motion descent.

I pried Steve's hallway closet door open and grabbed someone's black leather jacket. I knew the two of them wouldn't protest, if they even noticed, which I doubted. I should have known, it was about ten sizes too small, and I ran back carrying the tiny leather jacket and the soggy, dirty coat that had cost I don't know how many paychecks.

I made it just in time for my 2:30. I'd been in charge of measuring a Twitter campaign, which had consumed most of the year with meetings, furious debates concerning the "right" slogan. (We'd settled on You Do You!) All of our efforts, wasted. My PowerPoint slides were filled with so many flat lines, it looked like a bad Rothko.

In conclusion, I said, "As you see, there were no effects."

One of my co-workers was a new hire named Hope whose face was hidden by thick black spectacles that formed two owlish circles.  "There are phantom effects," she whispered. She had a babyish voice that made everything a question, as if the entire universe was a puzzle.

It was late, the snow was sticking, getting a taxi would be impossible.

"Like vibrations that are too soft to hear or measure. People who know us, but unconsciously. If we didn't do these activities, those …vibrations would disappear. Thousands of phantoms are listening to us, maybe they don't use Twitter, you see what I'm saying?"

Everyone looked down at their phones.  "I see," I said, and she blinked back her tears, gratefully.

We meandered back to our cubicles. I stared at my monitor, waiting for an email from Steve.

I thought he'd show up for the jacket, but after a few long months, I gave it to Hope to cheer her up.  She was still mourning the failed campaign, waiting for phantoms to emerge in the twitter-sphere.

I wonder about Steve.  By now, he might have a new distraction, if that's what I was, or maybe he married the skinny woman with the tiny leather jacket, if they weren't married already, or maybe they got a new, smarter couples' counselor. Or he went on the Whole 30 Diet, started running, meditating, bettered his life in multiple ways. Or he's mastered Japanese, so he can watch the films without subtitles.

Or maybe nothing's changed. Maybe he is exactly the same except I don't know him.

Last week, we attended an Ozu festival and I saw Tokyo Story. It was about an old couple who travel to see their children, but their selfish kids have no time for them, and the old wife dies. The only person who cares is the beautiful widow of their dead son. She's so lovely and sweet it breaks your heart.  Afterward, I was crying, so my husband explained how the film portrayed the breakdown of traditional Japanese culture after the Second World War.

I suppose that's one way to look at it. I don't know about Japanese traditions, although I know a little about selfishness.

Later, I wrote to Steve about how heartless the old man's kids were, how it wasn't anyone's fault, how hard it is to do the right thing. Then I erased every word until nothing was left, not even his name. Still, my words are out there, somewhere, even if no one reads them, and I figure I'm as prepared for the future as anyone else.

Carla Sarett's work has recently appeared in Black Rabbit Quarterly, The Olive Press, Across the Margins, and has been nominated for Best American Essay and the Pushcart Prize. Her novel, A Closet Feminist, is forthcoming from Unsolicited Press. She lives in San Francisco.