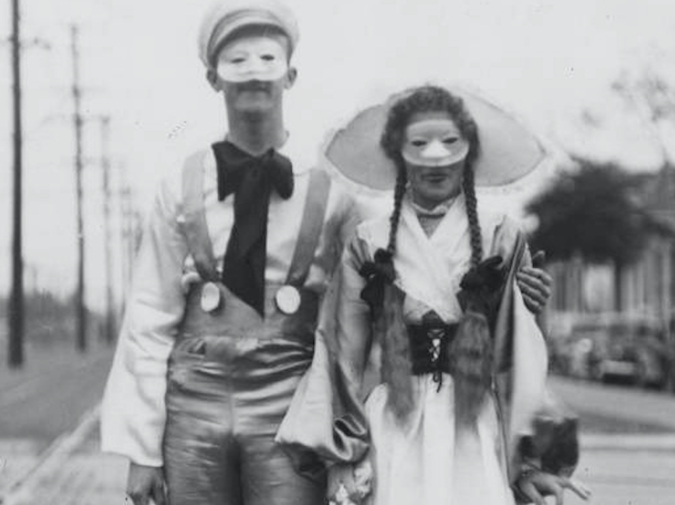 Phil wasn’t a pimp but he sure loved to dress like one. Every morning come the egg crack of dawn, he’d put on — in this order — his chinchilla fur, his radioscopic Ray Bans, his alligator boots (spinning his spurs once for Lady Luck), a Jumbo Fuente Fuente cigar he’d wedge into a corner of his mouth (which he never lit), and he’d swing his ghost white skinny ass down Rue Saint Ann and receive salutations from a tenth hierarchy of angels — the honeys, the Creole babies, the morritas, the Katrinas in their tit slings — heck, even the actual pimps themselves would shout “Hey, Phil!” as he passed.

Most nights, Phil would raise a hand, continue on home, and stand at the open door of the fridge. Other nights, he’d stop and chat and tell a story.

The second time he saw God, Phil was going down on his queer friend, Apolline Toutant. Just as Apolline was about to hit her first peak, as she thrust out an arm to scoop the last bit of ice from a sweaty bowl on the nightstand, narrowly out of reach, pulling Phil’s head somehow closer as she did this and gasped for the love of all things cosmic to continue doing exactly what he was doing when she first hit that peak, just then, as Apolline crushed his head between her brawny, burning thighs, Phil’s vision frosted over, and in that hushed winterscape, a two-headed grizzly bear who Phil knew was God ambled into view. And God said in a voice that reminded Phil of Lord Buckley — that old atomic age priest of love — “Mathematics is the language, and you got to practice your summms!”

Afterwards, under the ghost white light in Apolline’s tiny bathroom, Phil had tried to gargle quietly. She swept in beside him and tore off a stream of toilet paper. “That's sweet,” she said, “but I know I don’t taste like springtime.” He smiled with his cheeks full, and then gargled again, loud enough that the neighbors could hear. Belted it. Apolline thrust a few knuckles into his ribs, and he laughed and sprayed a blue mist across her mirror.

All along Tchoupitoulas Street, its craggy sidewalk wide enough for one, they kept the same easy pace. They walked on the opposite side of the street, next to the muck-colored barrier wall and dying grass. The wall itself stood eight feet high, preventing them from looking out on the Mississippi, except for the arms of the riverside cranes that occasionally reached up into the steaming sunset.

They could have taken a livelier route to the ferry, but Apolline wanted a pineapple snoball. She also didn’t want her bride-to-be—Force Melinda, Phil called her—to hear of their time together. Melinda would wail and tip over the silverware drawer and sweep all the pots out of the cupboards. And, were this to pass, Apolline would pick it all up and rewash it.

Now the snoball dripped syrupy lines around her wrist as they walked. Whenever he came this way, Phil remembered her long ago asking, “You know the Mississippi makes a ball sac out of New Orleans, don’t you?” He had only blinked. “Look at a map sometime,” she said.

After she licked the goop from her wrist, crunched up the paper cone and flung it over the wall, they began to trade their sorrows. Her hands were always sweaty, even after she wiped them on her cotton short shorts. As she took his hand now, hers was syrupy and sweaty. He held it the way he would’ve held a child’s crossing a busy street.

“I can only sleep for fifteen minutes at a stretch.”

“I’m tired all the time, even when I first wake up.”

“My pillow is flat.”

“My friends all want to die; they want me to convince them not to.”

“My grandmoms is dying.”

“My father is a bastard.”

“My hair is dry as black toast.”

“I keep making the same mistakes.”

“My brain is dripping down the back of my throat.”

“I can never say what I feel.”

“I haven’t loved anyone since my first love, Sophie.”

They crossed the street and climbed through the covered bridge. They stepped out into the gummy heat and the sulfur fumes of the brown river and out onto the ferry. Phil watched his friend walk over to the railing on the deck. He knew the exact posture she would take when she reached the railing. The few moments of attention she would give to the churning of the paddle wheel, the muddy gulls overhead, the charcoal puffs from the exhaust stack. Further off, a red atom flicker that topped a pale steeple rising up across the river. A church they had attended by their own initiative when younger. Where he first thought he saw.

Phil watched as the last gleam of the sun brushed over her bourbon skin.  He thought of how much of her he had lost since the days before Melinda. He thought that nothing could last, not the smoky center of their friendship, the red atom light, not this massive iron vessel, the barrier wall or even the toxic river itself. As children they dreamed the world would get more efficient; now it seemed it could only get stickier and hotter until everything was stuck in place and burned from the earth.

He joined her at the railing. Neither of them spoke of the night they had crossed over to escape the heat (wandering  from the ferry, past King Satchmo laughing over the levee, a few aimless blocks through Algiers) and with no small bit of wonder had discovered the firemen dousing each other with fantastic arcing columns of water. The hefty men were shirtless and beaming. Children ran with the floppy arms of the huge reflective jackets trailing behind, oversized helmets strapped to their head. Even the elderly spun through the mist of the jet streams. They never spoke of that night, but they couldn’t help wandering over that way, if only to find the great red garage doors closed tight.

Michael Place recently moved to Los Angeles and completed his first story collection, with the working title American Braves. Two of his stories were finalists in the 2018 American Short(er) Fiction Contest, and his book reviews have appeared at Sou’wester. He received an MFA from Columbia University and has taught writing in Chicago, New York, and Ensenada, Mexico.