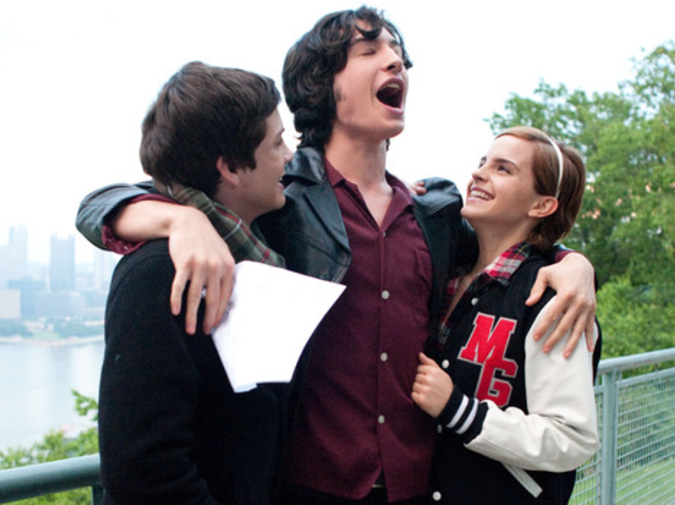 Perks of Being a Wallflower is the very beautiful, slightly tragic, endearing story of diffident, introverted Charlie (Logan Lerman) and his first year of high school as he’s taken under the wings of Sam (Emma Watson) and Patrick (Ezra Miller). It’s about Charlie finally having to explore the real world, and deal with the realization of his own depression after his best friend committed suicide not even a year before. However, don’t let all this fool you into thinking it’s a super serious, downer of a movie. It’s not. It’s hilarious. Flamboyantly gay Patrick is absolutely amazing, and Ezra Miller plays his character better than I ever could have imagined, and the subtleties of Watson’s acting adds to the movie in a way that you don’t realize until it’s over. And of course, Charlie is every bit as perfectly naïve and adorable as I imagined him.

Having just read the book a couple days before seeing the movie, I can attest to the fact that even though it’s a great book, I think the movie surpassed it. Of course the characters in the book were great, but they came to life so much more on screen. I wasn't the biggest fan of Patrick in the book, for example, but in the movie I think he might have been my favorite character.

The author of the book, Stephen Chbosky, both wrote and directed the movie, so you can be sure that you won’t be let down like so many other movie-book combos that are just disappointing. Oh, and not to mention, the soundtrack is insanely amazing. Like, I need it. I especially liked the songs because they are all mentioned in the book as being important to Charlie, but when you can actually hear them being played along with the story, it’s so much better in a way that’s indescribable.

This movie does, in fact, leave you feeling infinite. The characters are all so uplifting and empowering, and it’s like “well, if Charlie can do it, then so can I”. He seems so…normal… that everyone who’s ever felt like an outcast, or like they didn’t fit in, can relate to him perfectly, without feeling odd or strange. Perks of Being a Wallflower is touching, lovable, and an amazing story that touches on so many of the awkward issues of high school as well as the real world beyond it, that it is absolutely a must see. :)