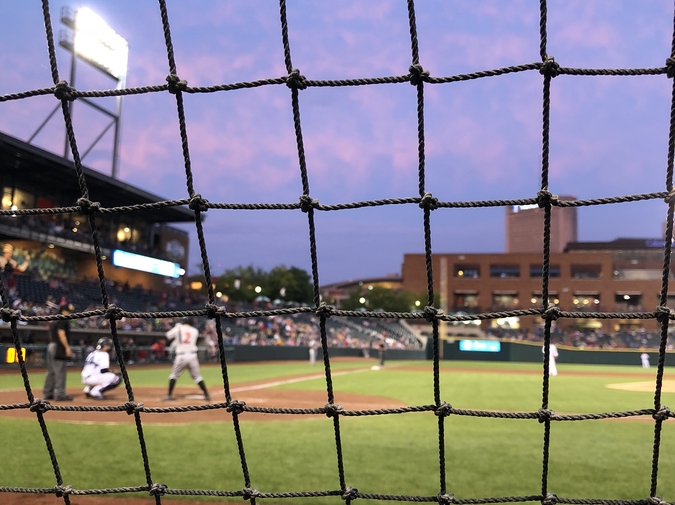 I suppose there’s something to be said
for the fact that I can read a box score
as if second nature and not nature itself,

discordant data of men, their improbable,
certain physics I practically worship, use
to fill an empty life. The knee highs

and chalked lines, throats and bats slick
with sweat, they’re just part of it,
but few in this game care for the record

of unrecordable things—fresh paint
on the grandstands, its epoxied burn; leather
meeting leather, the implication of arms

in arc, a hand in pain. I’ve heard it called
the Long Dark, this approach of season’s end—
familiar, expected, and yet each time not fully

known, as when, on my walks through
other fields, I know and do not know the strain
of wheat grown there. It might be hard

red spring or soft red winter. A duck snort
plops over the second baseman’s head
and the powers that be decide it’s an error, judge

he could have pulled off some tumble of a leap.
The right fielder could’ve run in faster, too,
but E4 glares on the jumbotron, crackles out

from the PA. Just once I wish grief could be like this,
the ease and break of a game left in the halves
between fathers and sons, songs and their silences,

but grief has no off-season. Instead it writes
itself large on insurance billboards, in windows,
third floor cancer wards. Smaller, too.

Something in the pocket. The empty seat
next to mine. I keep turning to see that thin frown,
your gentle disapproval over the souvenir beer

warming in your grip. Your absence is
as inscrutable as the inscrutable alphabet of wheat—
the smallness of barely-begun grains, the path

the wind makes for itself—and yet I keep trying
to read it, to know it as it must be known:
like this game, which, in the deep frost of late

fall, winter’s awful sludge-work, will be
as if it never was. You feel that way to me
most of the time, as if you never were,

though not with baseball, the game most haunted
by its ghosts. Maybe it’s the familiar rhythm:
out of nothing the pitcher’s spark, his coiled body,

grip on the ball strong, warm, until
all at once he looks up and decides it’s time.
His body lets go. His hand falls.

Molly Brown currently lives in Columbus, OH. Her work can be found in The Adirondack Review, Crab Creek Review, Word Riot, and elsewhere. Follow her on Twitter @unsinkmollyb. Go Cubs!